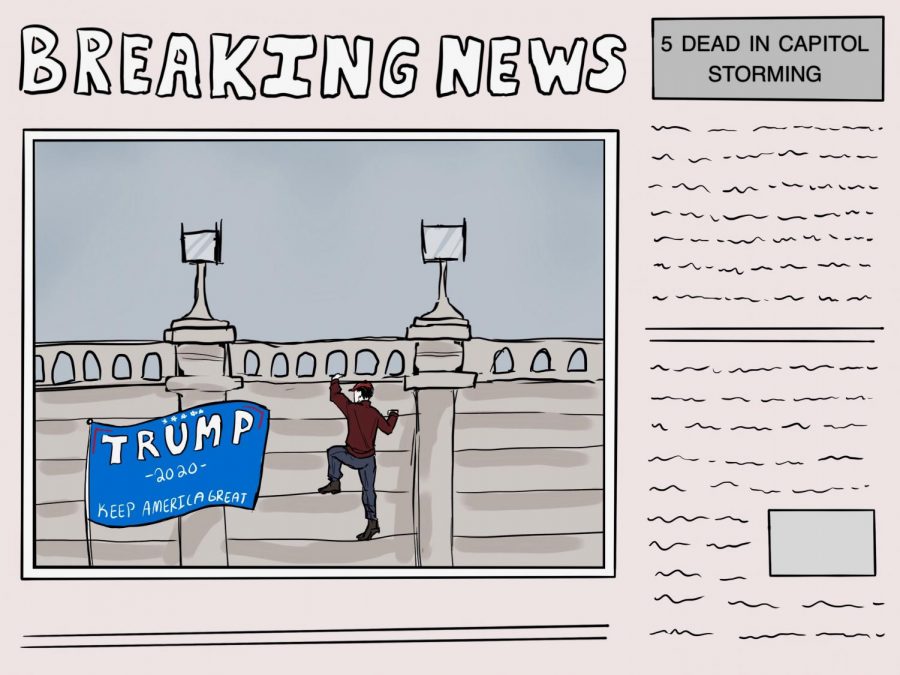 No, riot was act of white supremacy, exactly how media portrayed it

Following the scheduled certification of the 2020 presidential election results, armed rioters stormed the U.S. Capitol building stealing furniture, vandalizing offices, smashing windows, and destroying news media’s equipment. Since then, there have been five confirmed deaths and more than 30 people arrested on federal charges.

These rioters are domestic terrorists, and the fact that only 52 arrests have been made so far is an indication of the power white supremacists and far-right groups have. I’m still shocked that people were able to break into the Capitol building in the first place, but I think that if the terrorists were largely people of color, or from a foreign country, the response would have been very different.

Confederate battle flags, powerful anti-Semitism, and the yellow Gadsden flag (designed by a slave trader and owner at the beginning of the American Revolution) were amongst the symbols proudly carried by those at the Capitol riot. If this isn’t a clear display of white supremacy in America, I don’t know what is. This is also the behavior Trump endorses, tweeting to his followers to swarm D.C., calling the terrorists “patriots”, and telling them that they are “loved” following the violence.

It confuses me why there were so many American flags present at the Capitol riot, alongside symbols for white supremacy. It is in no way patriotic to hold racist flags while attacking a building that stands for American democracy, unless American patriotism is still associated with whiteness.

This attack could have been prevented if leaders and law enforcement had been paying attention. The Trump supporters that stormed the Capitol had been planning for violence on far-right platforms such as Parler and Gab (far right-wing social media platforms) for weeks. On the other hand, Capitol police seemed to be unprepared. This should not have been the case if violent threats to attack the national government were circulating the internet.

Moving forward, the Capitol riot should be compared to the long history of white superemacist terrorism in America. Not to the Black Lives Matter protests, Hong Kong protests, or Arab unrest. I think that people who are comparing an act of terrorism to movements for human rights are not only disrespectful but beyond priveleged.

The Black Lives Matter movement resurfaced after a Black man was wrongfully arrested and suffocated to death. The Capitol riot occured because of supposed “election fraud” to “Stop the Steal” after election results were already verified. Where is the logic? The Capitol Building is amongst the most symbolically important buildings for American democracy, yet people are comparing it’s siege to protests for basic human rights and decency.

The Capitol riot deserved the media coverage that it received. I don’t think it was the violence that was shocking, but it was the fact that Trump’s supporters carried out an attempted coup just to keep him in power.

Let’s not forget the long history of violence associated with white supremacy in this country, some of which has been disguised as patriotism, and some of which is still occurring today. In the 1960s, immigration acts were passed to limit Asian and African immigrants for the preference of Europeans. In the mid-1990s, white supremacists bombed federal buildings and infrastructure in opposition to government policies, abortion, or LGBTQ rights. Even Trump’s campaign rhetoric is based on eliminating immigrants in order to highlight America’s “greatness”, which I think is just another term synonymous with whiteness.

The white supremacist groups that exist today are the biggest threat to American democracy. We often talk about white nationalism and domestic terrorism as if it is a topic of the past, but it is not. Biden’s election will not be the solution to America’s problems, and neither will Trump’s temporary social media ban or Parler’s removal from the app store. However, I do hope that Biden’s Administration will bring the start to better change for the nation. 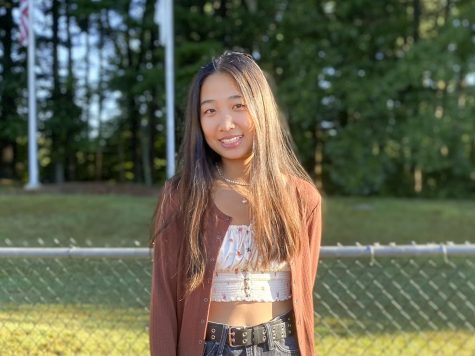 The recent acts of terrorism, riots and vandalization on Jan. 6 at the Capitol Building went much too far and have embarrassed millions of Trump supporters around the country.

As a Trump supporter, I was appalled to see the acts that occurred in Washington D.C.. One must know where to draw the line between peaceful protest and riots, and that line was crossed by the extremists who infiltrated the Capitol Building. Though at the end of the day, I think it is important to understand that the vast majority of Americans do not condone these actions, regardless of their political affiliation.

At times like these, I think it is important to step back and look at things logically. The atrocities committed in D.C. represent a tiny portion of extremists and not the entire political party as a whole. While it is not shown nearly as much by the media, the protests in D.C. have been and continue to be, overall, peaceful. While the headlines are overwhelmingly negative, as they should be with the events that have occurred, it is good to know that the coverage is not an accurate representation of the entire demonstration as a whole.

However, I believe the response from the media has been slightly biased, making it seem as if this type of thing is ¨unseen behavior.¨ It’s logical to compare it to the Black Lives Matter movement, which gained lots of momentum in mid-2020. The BLM movement, similarly to the demonstrations in D.C. right now, was much more peaceful than violent. However, in both instances, protests moved to riots and violence ensued.

I am using these statistics in no way to discredit the BLM movement. Instead, I am using these stats to draw attention to the difference between the general impact that the BLM riots and the Capitol riots had on the country versus how the media portrayed them. While the Capitol protests are overwhelmingly peaceful, the media is strongly centered around the riots and the negative of the situation. The coverage of the BLM movement I thought was largely positive, while the riots that were a result of the movement caused an extraordinary amount of damage.

I also believe that the media has been unfair to former President Donald Trump during this time. Trump has done nothing but condemn the riots, and is being ridiculed for ¨inciting violence.¨ While many questioned Trump’s decision to not send in the National Guard, he released statements telling the rioters to stand down and go home. Trump addressed the rioters and said, ¨You have to go home now… We have to have peace. We have to have law and order. We don’t want anybody hurt.¨ Now, I strongly believe that any politician inciting violence is extremely unacceptable; however, in the past, it has been overlooked with other politicians. Some quotes really stood out to me from left-leaning politicians over the past couple of years that I found to be unacceptable.

¨I just don’t know why there aren’t uprisings all over the country. Maybe there will be,¨ said Nancy Pelosi in 2018 in response to immigration policies.

¨If you see anybody from that cabinet in a restaurant, in a department store, at a gasoline station, you get out and create a crowd and you push back on them and you tell them they’re not welcome anymore, anywhere,¨ said Maxine Waters while addressing Trump administration officials in 2018.

No part of me is condoning anything that has occurred during the riots at the Capitol Building; however, I do question the bias of the media during times like this comparing the response to other demonstrations in the previous years. By creating completely negative coverage towards one political party, the media creates more division and vilifies the party as a whole. 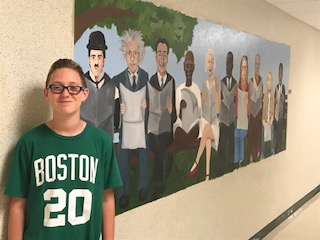