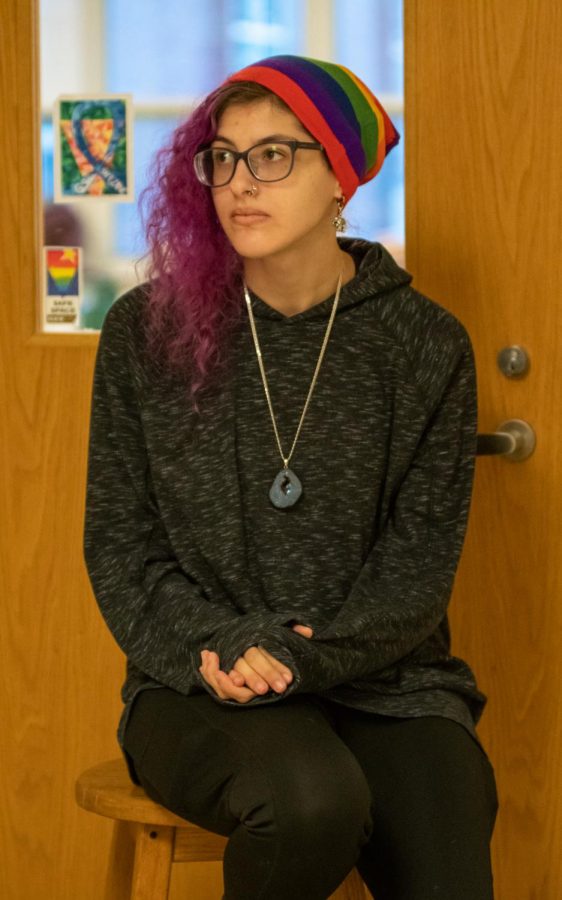 "The first GSA meeting I went to was when I first startd to feel better about [my identity]," senior Mary Youssef, who sits outside the room where GSA meetings are held, said.

Senior Mary Youssef, who identifies as “someone who goes with the flow,” struggled to find her identity, but with the help of the Gender-Sexuality Alliance (GSA), gained the confidence to come out.

“I was afraid about coming out and then being wrong about it because then taking that back is a lot harder than saying it,” Youssef said.

When Youssef began attending GSA meetings her freshman year, she began to feel more comfortable with her identity.

Of students have used a slur aimed at the LGBT community

“The first GSA meeting I went to was when I first started to feel better about it because at that point, I was like ‘Pansexual seems like the right thing,’ and we were going around and if you wanted to, you could share and someone else said [they were pansexual],” Youssef said. “I vaguely knew her, so I was like ‘Ok, it’s right. It’s okay. I’m validated.’”

In her experience, Youssef has found both the student body and faculty to be largely accepting of members of the LGBT community.

However, when Youssef told a male friend who she was romantically involved with about her sexual orientation three years ago, it immediately ruined their relationship.

“It felt horrible honestly because we had gotten really close,” Youssef said. “He cut off the emotional relationship that we had and that kind of sucked because he was one of those people you tell almost everything, and then he was like ‘Nope, bye.’”