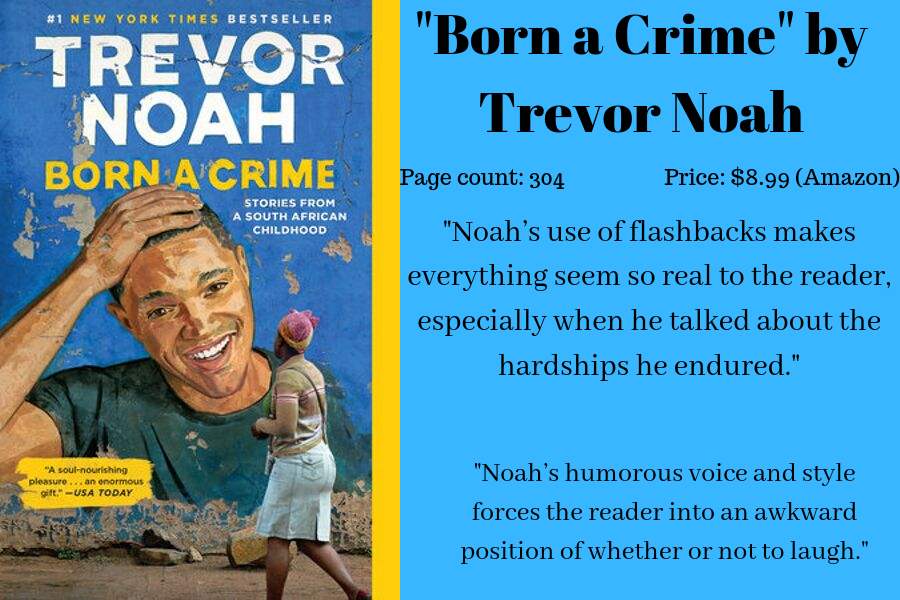 In South Africa, around 1984, “The Daily Show” host, Trevor Noah, was living a secret life due to racial laws in his country.  Noah’s memoir “Born a Crime” includes themes of racism, abuse, serength, faith, and love. I particularly enjoyed Noah’s memoir, since I got to see a new side of the culture in South Africa.

The story opens with the reason Noah is a crime; he was a living crime, since his parents were an interracial couple. At this time in South Africa, it was illegal for a black person to have children with a white person. Noah was forced to be hidden from his community in a basement, unable to leave his home during his early childhood so he wouldn’t be taken away. Noah’s mother was integral in showing him the way through his childhood. She taught him what was right and what was wrong. I thought it was interesting how Noah related back to how these experiences still impact him today. He mentioned that his mother helped him get through these times. Without the help of his mother, Noah believes that he would still be living a life in crime.

Noah’s realistic writing style makes this book unique, as he used flashbacks throughout the memoir.  Noah’s use of flashbacks makes everything seem so real to the reader, especially when he talked about the hardships he endured.

This book was a pleasure to read, even though it was a darker non-fiction book.  If you like learning about rights and racism in the past, this book is definitely a good read for you. 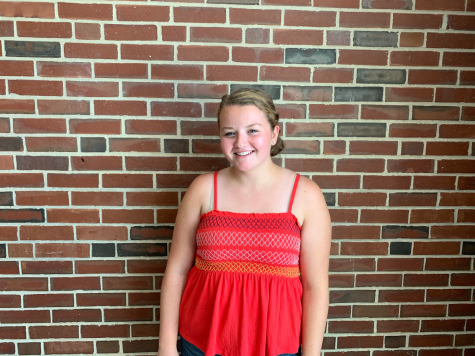 Imagine being thrown from a car by your own mother. This is how “The Daily Show” host Trevor Noah starts his gripping life story. Noah wonderfully describes his difficult life in the 1990s South Africa with funny stories and self-deprecating jokes in his autobiography “Born a Crime”.

Instead of following his life chronologically, Noah shares selected stories about his life, laughable and serious, in a humorous manner. Despite the book’s structure, the reader still gets a good sense of Noah’s life story.

Because the book takes place across his whole adolescence, there are few characters besides Noah and his family. While his mother was loving, his step-dad was a cruel alcoholic who refused to acknowledge Noah as his son. This was because Noah was quite literally “born a crime.” Noah grew up living in the apartheid, which simply is a series of laws and rules set forth to control native Africans interactions with the white people who were trying to colonize. During those times in South Africa, it was illegal for a white person and a native person of color to have sex. Noah is a “mixed” man meaning just that happened; his mother, a native, slept with a Swiss-German man.

Noah’s humorous voice and style forces the reader into an awkward position of whether or not to laugh. Noah makes jokes about everything including events that most wouldn’t have the audacity to joke about, such as the inherent anti-native culture that existed in South Africa. However, this style wasn’t a surprise, seeing as Noah is a comedian.

For readers who enjoy funny, engaging autobiographies and want to learn about South Africa’s past along the way, Trevor Noah’s “Born a Crime” is the perfect book. 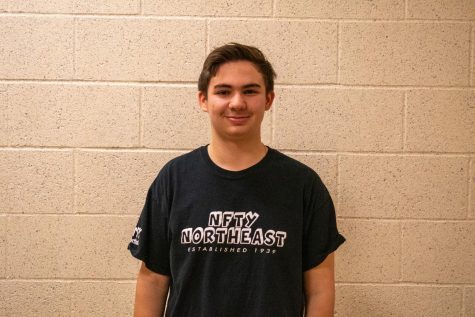