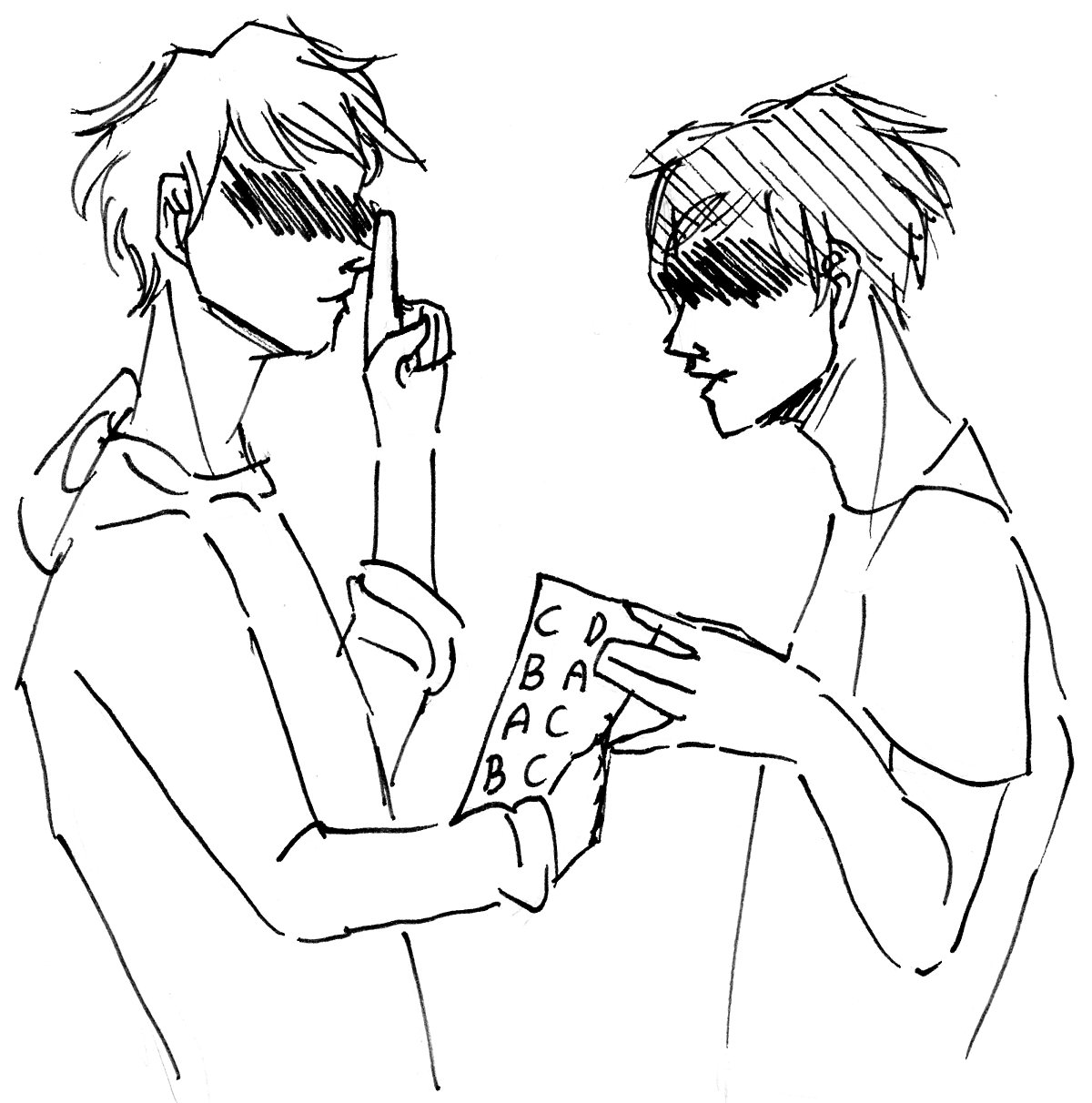 The days where people have a cheat sheet are over–unless of course, you’re an amateur cheater and it seems few ARHS students are cheating amateurs.

According to a Harbinger survey of 186 students from March 28 to April 5 through Google Forms, 88 percent of students who cheated in the classroom were not caught.

Academic dishonesty is a problem in Algonquin, and in almost any other high school around the nation.

According to a survey of 70,000 students at 24 high schools in the United States by Dr. Donald McCabe and the International Center for Academic Integrity, 95 percent of the respondents said they have participated in an act of academic dishonesty.

The Algonquin Student Handbook states “students who present the work of others as their own or are involved in complicity with another to present work which is not their own is considered an act of academic dishonesty.”

Assistant Principal Andrew McGowan thinks it is important to develop good habits in high school because it will shape who someone will become.

“Barriers that you put up now will mold who you become,” McGowan said. “If you resolve within yourself not to cheat on something as a freshman in high school and you stick to that through your high school career, I think it’s going to make you that much more honest with yourself and with what you do.”

“I think what drives students more to compete here is what comes after high school,” Betar said.

Many students at Algonquin are academically competitive which can affect the amount of academic dishonesty. Some may feel more inclined to be academically dishonest in order to perform better than their peers.

“[Algonquin is] very competitive,” sophomore Felipe Guerra said. “[Algonquin] is one of the best schools in Mass. Kids come here looking forward to getting into really good colleges.”

“The idea should be that they are competing with themselves,” Math Department Head Elizabeth Dore said. “They should really just be trying to do as well in a class as they [can] possibly do–it doesn’t really matter what their grade is if they’ve done their best job.”

Other students think they have to do a lot in high school to get into competitive colleges. However, Betar questions these beliefs.

Because some students are so busy with packed schedules, which are filled with clubs and sports that seem to be necessities in the race to college, they may find cheating an easy way out from the grind of difficult, time-consuming schoolwork.

“It’s easy [to cheat]; it’s right there in their hands,” Betar said. “There are so many resources readily available.”

According to the Harbinger student survey, 73 percent of students feel like they have a lot of pressure to do well in school which contributes to why some students cheat. Some students worry more about how the grade will affect their future rather than trying learn a new concept. The pressure that comes with this can harm the students’ motives for learning.

“These days with the amount of pressure that’s come onto students, grades have become a negative reinforcement in that it’s not like ‘I’m going to earn an ‘A,’’ it’s ‘If I don’t do these things, I’m going to lose potential future success,’” junior Senna Hahn said.

Although it is wrong, students resort to cheating because they worry for their grades.

“Even though the morally correct thing to do if you are unsure on a test is fail it so the teacher can help, but there is no redemption for a bad grade,” an anonymous survey respondent said. “If you tank an assignment, there is no redeeming it and your grade will go down. It’s better to cheat and fake a good grade than admit you don’t know and fail. Even if I’ve studied I sometimes like the security of being able to cheat.”

When students see or think others are cheating too, they may rationalize their own behavior as a way to stay competitive.

“When you are surrounded by people who are receiving high grades for cheating, it’s hard to not also cheat,” an anonymous survey respondent said.

However, when students do get caught, it is important the students learn from their mistakes.

If the first offense is more serious or if the student has already been caught, then more consequences are added. These added consequences can include an in-school or out-of-school suspension, notification to all of the student’s current teachers, who can choose to withdraw a written recommendation for college and the removal of leadership positions in an extra-curricular.

“Any consequence is designed for an educational purpose,” McGowan said. “When it comes to plagiarism or cheating, that’s something that administration works directly with the teachers on.”

McGowan feels that consequences are imperative to help students learn from their mistakes.

“We work with the teacher that may be involved with it and hopefully make it a learning experience for the student so that it doesn’t happen again, but there are consequences that come with [cheating] too,” McGowan said.

Dore also has a similar look on consequences.

“[Consequences allow] them to see the value in what you’re teaching them,” Dore said.