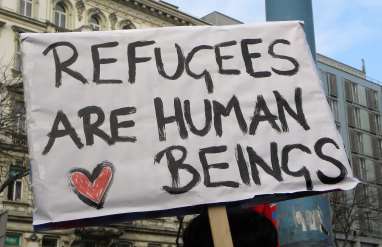 On January 27 at 4:42 pm, President Trump sat at the Resolute desk and signed an executive order which placed a temporary immigration ban on seven Muslim majority countries.

On January 28 at 7:25 am, two Syrian families arrived at the Philadelphia International Airport after an 18-hour flight, only to be detained and sent back to their country.

These two families are unfortunately not the only victims of this ban. Under Trump’s executive order, immigration from Iraq, Iran, Syria, Yemen, Sudan, Somalia, and Libya has been halted for 120 days.

Several nations in the Middle East are suffering right now, that is no secret. However, most immigrants coming from these countries flee to the United States with the hope of having a safer life, without the fear of danger constantly following them. Most immigrants don’t move because they are looking forward to living in a completely foreign place- they come because they are afraid.

Coming from a Christian Middle Eastern family, I can argue how strong this fear is. I have witnessed people coming to this country with nothing besides the hope of a better life. They do not come with the intent to harm anyone, but they are being punished for the actions of an extremist minority.

When President Trump put his pen to that paper, he told these innocent people around the world that they are not welcome. The country that had greeted immigrants with the quote “Give me your tired, your poor, your huddled masses yearning to breathe free, the wretched refuse of your teeming shore,” on the Statue of Liberty, was now saying that these people are not wanted.

President Trump has put this temporary ban with the intent of helping a national security issue, however he is making this situation worse and has no real solution. This ban, along with appalling, is temporary, making it even more unnecessary. In essence, all this order is doing is creating a divide between foreign countries and between the people of the United States.

I hope that as the next four years progress, President Trump will understand that people are people. Executive orders like this only alienate a group of innocent citizens, but I hope that it will bring the people of America together to fight for what is right.