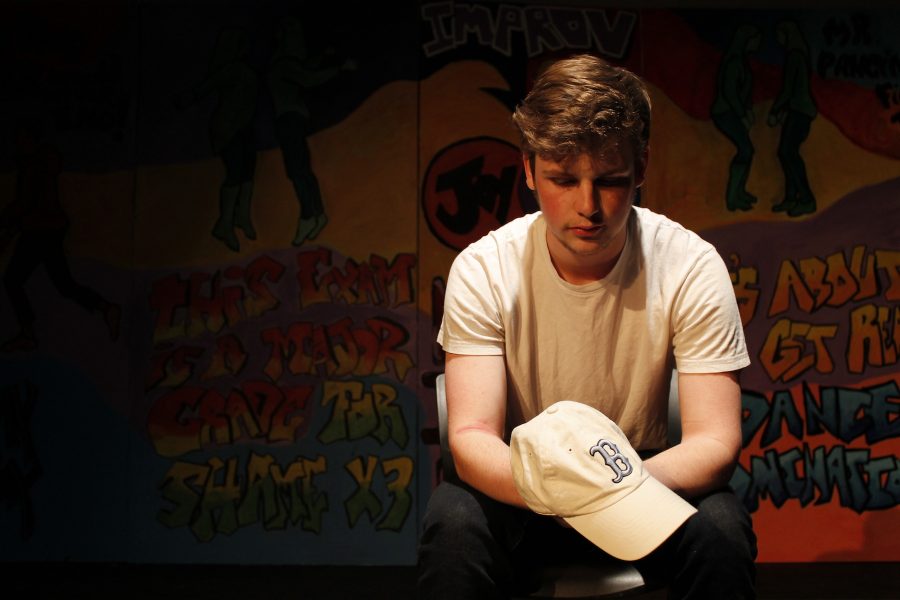 Junior Chuck Murray holds onto a Red Sox hat that signifies one of his earliest memories of going to baseball games with his uncle who has overcome heroin addiction.

Two of his family members suffered with addiction. In addition, his neighbor’s friend, whom Murray had grown close to, died from an opioid overdose.

“I know three people [who have dealt with drug addiction],” Murray said. “It’s scary because you know something is up with them. It’s scary to be around them because you don’t know what they are going to do next.”

“I have an uncle who lives in Marlboro,” Murray said. “I know he struggled [with addiction].”

Murray always had a close-knit relationship with his uncle. However, his uncle’s addiction to heroin put a division between the pair. Murray discovered the addiction after his uncle overdosed.

“For awhile, I couldn’t see him because he [his addiction] was really bad,” Murray said. “My uncle actually OD’ed and my mom told me about it. She was really upset about it.”

Murray’s uncle survived the overdose, and by seeking help for his addiction, he was able to recover and achieve sobriety.

Unfortunately, Murray’s first cousin, who is 31 years old, still struggles with his drug addiction to heroin in addition to his struggle with alcoholism.

“He is an alcoholic too,” Murray said. “He got really into [heroin]. I remember he came to a Christmas party three years ago and he was with his girlfriend, then two weeks later they both OD’ed but she [his cousin’s girlfriend] died.”

Murray’s cousin was featured in the popular television show called Drugs Inc. on the National Geographic Channel in 2015 and viewers could catch a glimpse of the harsh realities of drug abuse.

“The show shows people who are facing addiction, but it basically shows you what really goes on behind the scenes,” Murray said. “With [my cousin], he was in Boston and do you ever go into Boston and you see people outside with the cup trying to get cash? He was doing that but on public television. It showed him literally shooting up. It was scary to watch.”

Murray believes that a family history of addiction may have led his cousin to begin to abuse drugs.

“My cousin, his dad is an alcoholic, his mom is a alcoholic and I can see [why he started using drugs],” Murray said. “It makes sense. Every story here, it deals with bad parenting. Not taking away from my uncle, he is a great guy, but sometimes you struggle as a kid and it leads into your later years in life.”

“People don’t always shoot up because they want to,” Murray said. “They are usually running or hiding from something.”

Murray and his family still worry about his cousin who has yet to seek help.

“My cousin, no one really knows about him,” Murray said. “He [his addiction] is really bad.”

Drug addiction has also impacted Murray’s neighborhood friends. Murray describes his neighbors as more like a family unit than simply people who live next to each other. They share many things, including friends. Then, unexpectedly, two years ago one of their mutual friends died from a opioid overdose.

“That was very sudden,” Murray said. “I had no clue and that hit really hard. I was very upset. I don’t know how someone can push themselves to do something like that. They had to have been going through a lot to really put something into their bodies that does that to them.”

The man who died from the overdose was only 27 years old. The death affected Murray and his neighbors immensely.

“Seeing my neighbor, who is like my second dad, and seeing him being affected by [the death], someone who is like dad to me, it is not easy to do.” Murray said. “That was really tough.”

Murray explains that though many people know about the drug issue that is sweeping over the state and the nation, no one truly understands the effects until having direct ties with the problem.

“Everyone hears about it [heroin],” Murray said. “They are like, ‘It’s the worst drug you can take’ and obviously it is. But having it so close to your family and seeing my mom getting affected by it [Murry’s uncle’s addiction] was not easy to go through.”

After seeing how addiction impacted his uncle, his cousin, his neighbor’s friend, and their families, Murray promised himself to stay away from drugs.

“I know I will never get into that but it’s still good to know; to see how it really affects people and how it affects family,” Murray said. “Even if you are using and think it’s not affecting other people or you, it is affecting all your loved ones and all the people that mean something to you.”

As final message, Murray gave advice to people and families struggling with addiction.

“Just get help because if you are using drugs, you are not going anywhere,” Murray said. “Especially drugs like heroin, there is no coming back. Don’t start. There is almost no way of turning around. But you can get sober. My uncle proved that you can get clean and you can make good things happen in your life.”