THE ALGONQUIN HARBINGER • May 5, 2016 • https://arhsharbinger.com/7156/ae/acapacalypse-groups-performed-to-kill/ 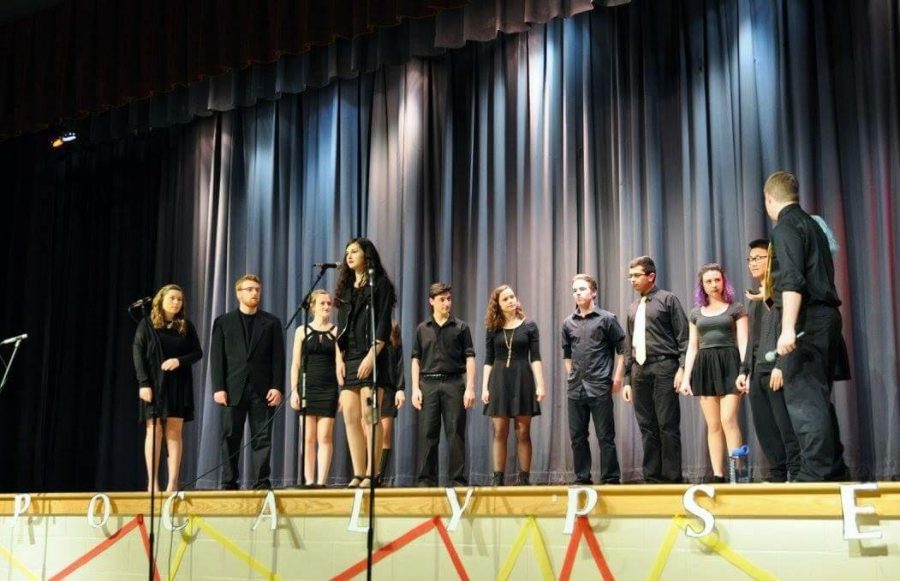 Six local acapella groups showcased their talents for the Acapacalypse hosted by Algoncapella in the auditorium on April 8.

The show’s performers, Algoncapella, Ladies First, Soulfege, Marksmen, Vocal Suspects, and Seven’s Not Enough, sang songs from many different genres without the use of any instruments.

“As it came closer it got a lot more stressful trying to coordinate all the different groups coming here, but it definitely paid off,” Sangorgi said.

Algoncapella set the standards high with five songs, highlighting the hard work and dedication leading up to their performance according to senior Henry Fournier who is also a member of Algoncapella and Soulfege .

“We really came together and I think we put on a good show, so I’m really proud of everything,” Fournier said.

“All the groups performed perfectly,” Piekarz said. “There is so much talent in our school and the schools surrounding us.”

Acapella offers many benefits to those willing to put in the effort and time to be in a successful group.

“[I love acapella] because of the camaraderie, all the fun times that people have through music, and the fact that it sounds cool,” Fournier said.

Fournier led Soulfege in a performance of “Hey Jude” by the Beatles, impressing junior Michaela Garvey who will lead Soulfege next school year.

“We worked really hard on that arrangement for a while, and Henry’s voice sounds so good singing the Beatles,” Garvey said.

Each group felt tremendously proud of their performances, and were happy with the end result of all the hard work.

“It’s so cool to see it all come together, how all of our personalities and voices fit together to finally get somewhere and sound so good on a song,” Garvey said.