From female to male: Alex opens up about being himself

“Optimism” features Cosentino and is a part of Ellie Howard’s photo project on the trans community. Howard said, “[The project] focuses on looking on the bright side of transition.”

When sophomore Alex Cosentino turned 3, he realized that he did not belong. Born Meredith Cosentino, he had been raised as a girl in accordance with his sex. Even at that young age, though, he knew there was something different about him.

12 years later, Cosentino would identify as a transgender male.

“Whenever I would make friends and they were girls, I felt very different from all of them. I was taught to act like a stereotypical girl would, but those skewed stereotypes never fit,” Cosentino said. “I didn’t really have a word for it because I didn’t know transgender existed. I had never been around gay people before. I thought they were like unicorns. I didn’t know they were real.”

The American Psychological Association defines gender and sex separately. Sex refers to a person’s biological status, and is typically either male or female. Gender, on the other hand, refers to the attitudes, feelings, and behaviors a culture associates based upon biological sex.

“Most people think of gender as being masculine or feminine, but there’s much more that goes into that,” Cosentino said.

Originally, Cosentino feared the ridicule and judgment that would accompany coming out as transgender. However, what others thought of him eventually began to matter less, and he worked up the courage to come out.

Administrators and faculty have taken measures to educate themselves on gender issues, ranging from bullying to bathrooms to sports. On Friday, April 10, the school administration will meet with a representative from the Gay, Lesbian, and Straight Education Network in order to develop a plan to better accommodate students who identify as LGBTQA (this commonly used acronym stands for Lesbian, Gay, Bisexual, Transgender, Questioning, and Asexual).

Nevertheless, Cosentino believes that administrators and faculty may never fully understand where he and other transgender students are coming from, simply because they have never had to face the same challenges.

“The school is trying hard to understand,” Cosentino said. “They’re definitely trying to see it from our perspective, but at the same time they might not understand what we talk about when we talk about our gender.” 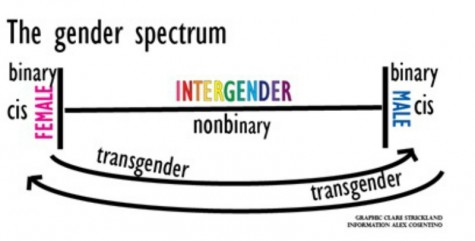 Cosentino’s gender identification has put him through many trials and tribulations other students do not have to deal with. For example, when Cosentino needs to go to the bathroom or get paper towels, he either has to walk to the school’s one gender neutral bathroom in the nurse’s office or risk getting dirty looks from other students who may question why someone who is physically female is using the boys bathroom.

“By going to the gender neutral bathroom when you identify as a male, it’s kind of giving in,” Cosentino said. “It’s really just running away from the problem. You should be able to get paper towels, go to the bathroom, or wash your hands without having to question who you are.”

Health classes have also presented a problem for Cosentino, who criticizes the class for teaching a curriculum geared towards cis males and females.

Furthermore, Cosentino has chosen not to participate in rugby as he did as a freshman before he came out as transgender last spring. He did not feel comfortable playing on the boys team: as a member of the girls team he was one of the smallest players. Additionally, his perceived risk of harassment or discrimination from teammates, refs, or parents further discouraged him from playing on the boys team. Although the coaches of the girls rugby team were supportive of including Cosentino, he ultimately decided that it would be too difficult for him to continue to participate in the sport.

At home, Cosentino’s gender has presented additional problems. Although his parents support him and his gender identification, he has been distanced from his younger sister, an eighth grader at Trottier. As an active member of the school’s Gender and Sexuality Alliance, Cosentino made presentations about the club at both Melican and Trottier to raise awareness about gender diversity. Because of their relationship, Cosentino said his sister began losing friends and having people at school refuse to talk to her and make fun of her. Cosentino believes that this bullying strained their relationship.

“It breaks my heart because she doesn’t like talking to me,” Cosentino said. “She knew me as Meredith and now she has a brother that she never knew she had.”

In many ways, Algonquin provides a safe place for Cosentino. He feels accepted at GSA. He is a member of the band, where he plays bass clarinet and clarinet, and also writes songs in his spare time to express his emotions surrounding his gender. Additionally, several teachers have made it a priority to make sure he feels safe in class.

Since Cosentino’s legal name is still Meredith, teachers can suspect his new gender preference when he tells them to call him Alex. Last year in Chemistry, after teacher Catherine Burchat realized that Cosentino was transgender, she took him aside to ask him what his preferred pronouns were, whether he needed any help in class, and what his family situation was like, not wanting to out him to his parents if they were not already aware of his gender identification.

“I suck at chemistry, but it’s my favorite class because I feel safe in it,” Cosentino said.

When Cosentino inevitably encounters a gender-biased person, he tries to educate them and be nonjudgmental.

“I try to educate people and help them understand because yelling and getting angry just isn’t a good course of action,” Cosentino said. “I try to be as open minded as possible. I try to think they’re trying and not being malicious.”

As evidenced by his appearance, Cosentino embraces being a nonconformist. His blue hair (“It doesn’t mean anything. I just really like blue hair,” he says), heavily-pierced face (he has 12 piercings), desire to refer to everyone as “friend,” and overt love for elephants (“I love elephants because they don’t judge your gender, which is pretty awesome”) reveal someone who is comfortable in his own skin.

“I’m embracing myself… I’m just going to be who I am,” Cosentino said. “I’m questioning things about myself I haven’t questioned before, and really thinking about how I feel.”

**See related transgender article “Q & A: A photographer with a mission”