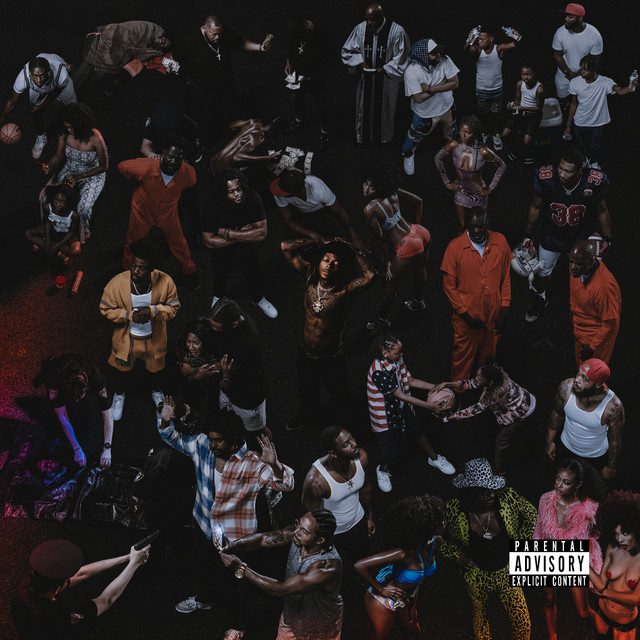 JID digs deep into his past and proves his artistry on his newest album “The Forever Story,” released on Aug. 26.

After four years since his last full-length project, Atlanta-based member of J. Cole’s rap label Dreamville, JID finally released his highly anticipated album. After constantly building up hype surrounding this project through features on Dreamville’s “Revenge of the Dreamers 3” and Doja Cat’s “Planet Her”, he does not disappoint in the slightest.

“The Forever Story” continues and improves upon the 2017 prequel to this album, “The Never Story.” It pairs his top of the line rhymes and flows along with intricately woven instrumentals. However, he brings more than just technical skills this time around, delivering one of the most thematically rich and lyrically profound projects of the year, exploring his upbringing and the relationships within his life.

“Galaxy,” the first track on the project, serves as a nice introduction with smooth vocals over a warm piano melody, very similar to the intro “Doo Wap” off of “The Never Story.” This soft atmosphere is contrasted by the next track “Raydar,” which immediately comes in with punchy 808s alongside JID’s witty wordplay. The beat then switches to a dark moody piano, paired with faster delivery diving into more substenent lyrics exploring JID’s ego and perception of himself.

Two tracks off the album were singles released earlier in the year, each serving as tastes of the album and showcases of his improved rapping ability. On the hit single and sixth track “Surround Sound,” JID fires a constant stream of alternating flows, as he rides the fast-paced sample based trap instrumental, which eventually shifts to a groovy and mellow bass-driven beat. In addition, 21 Savage delivers a phenomenal feature, filled with the clever lines and rhyme schemes that he has become known for.

The second single released in August, “Dance Now” featuring fellow Atlanta rapper Kenny Mason, gives listeners a treat as JID utilizes his unique talents, such as doing voice inflections, to emphasize certain themes of the song like temptations, sinning and “dancing with the devil”.

The eleventh track “Stars” features JID’s pitched-up rap vocals, floating over a wobbly synth with whimsical flute undertones, paired alongside chill lofi-esque drums. Lyrically, it reflects on his experience of trying to make it as a rapper in the industry, and the promises he made to keep people in his life while he was struggling.

JID does not forget about the artists grew up listening to, paying respect to other hip-hop legends in several lines on the album. “I used to wanna be Jay, I used to wanna be Wayne. I used to wanna be Kanye and Andre 3K.” Crazy enough, Lil Wayne was actually featured on the project, delivering a dynamic verse on the energetic twelfth track “Just in Time.” This displays the distance JID has come since the start of his career, now performing alongside one of his idols.

The aspect that JID has improved on most compared to his former projects is his ability to express emotion. This change is seen clearly in the seventh track “Kody Blu 31,” which is a homage to his friend’s son named Kody, who unfortunately passed away. The song is essentially helping the mom of Kody to “keep on swangin’” and “keep her head high” in the face of grief. However, what makes this so emotionally present alongside the lyrics is his singing, which is surprisingly filled with passion and warmth.

While almost every song on this album could be my favorite, the one that truly stuck with me was the fourth track, “Crack Sandwich,” which explores siblinghood and the importance of family, detailing the relationship between him and his parents during his youth. In the last verse of the song, he recalls the vivid story of a New Orleans street brawl that he was involved in, very reminiscent of the storytelling in one of my favorite hip-hop songs by fellow Dreamville member Saba, “PROM/KING.” These touching lyrics paired with a hypnotizing old school hip-hop instrumental and real audio clips from phone calls with family members make for a strikingly imaginative song.

After being under the shadow of J. Cole for far too long, JID proves himself to be more than just a promising rapper. He displays his incredible lyricism, flows, voice and range as not just a rapper, but a remarkably distinct musician. With this project, JID forms his own path stylistically, finds himself as an artist and ultimately breaks away from his other contemporaries, all while staying true to his roots as a humble Atlantan rapper.