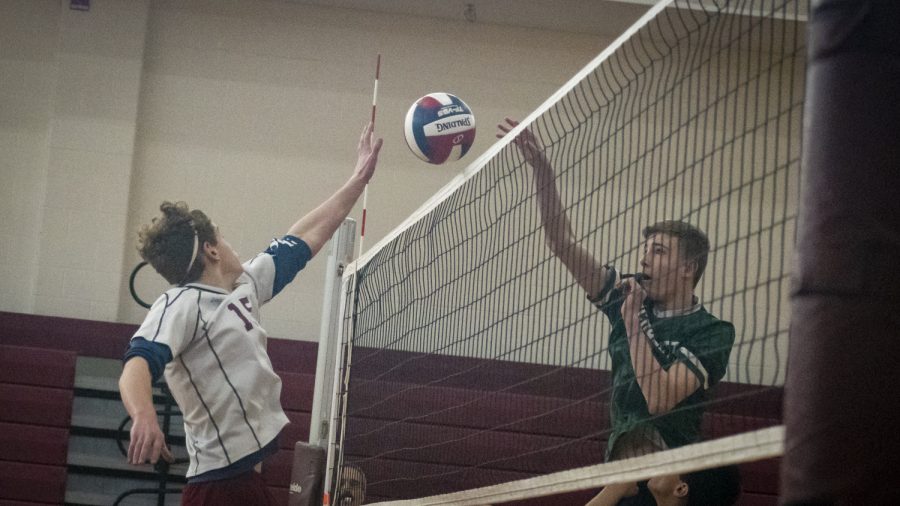 A season of turnover and the introduction of new staff left the boys’ volleyball team unsure about the future of their program, but with a final record of 14-5, an experienced new coach has brought them together with a focus on winning.

After losing some key players from last year, the team had fairly pessimistic predictions for the season. In addition to several talented seniors, they also lost their head coach Nick Bryant after several years of coaching at Algonquin. However, new head coach Kelvin Rivera has brought extensive playing experience and energy to the program.

Rivera’s background in high-level volleyball has served as an asset to the team this season. From winning the high school state championship for Framingham, to playing Division 3 college volleyball at Carthage College, Rivera brings rich experience to the team.

“He knows how to win,” junior Jack Roberts said. “He’s been really good for us.”

With new junior varsity and varsity coaches, some team members felt there was an absence of immediate leadership. It took a while to adjust to Rivera’s new coaching philosophy, but according to some of the upperclassmen, a brand new environment may have been good for the team.

“Having a new coach, it was kind of difficult to predict how the season would go because I didn’t know his personality or coaching style,” senior captain Lucas Ramondo said.

In the early stages of the season, upperclassmen felt obligated to step up and help the coach. The three captains, Ramondo, Kerrigan and Andrew Sedzia were the glue of the team, offering their support to the underclassmen.

“They have done really well as captains,” junior Jason Wong said. “They’ve stepped up and helped the younger kids.”

Wong also believes the underclassmen have helped add positivity to this year’s team.

“Seeing all the underclassmen step up and play how they want to is really exciting to watch,” Wong said.

The team feels that they’ve come a long way. An overall winning record is proof that their persistence and refusal to give up have paid off thus far.

Having a new coach comes with a lot of trial and error. According to Wong, Rivera possesses a much different skill set than their previous coach, which demanded a lot of flexibility from the athletes. Many players tried out different positions and adapted very well.

Though it took a while for the team to gel, Ramondo says Rivera has brought an uplifting energy to the already strong team.

“I think we’re all happy with where things are going,” Ramondo said.