THE ALGONQUIN HARBINGER • May 17, 2022 • https://arhsharbinger.com/30716/profile/sophomore-jazz-duo-brings-live-music-to-restaurants/ 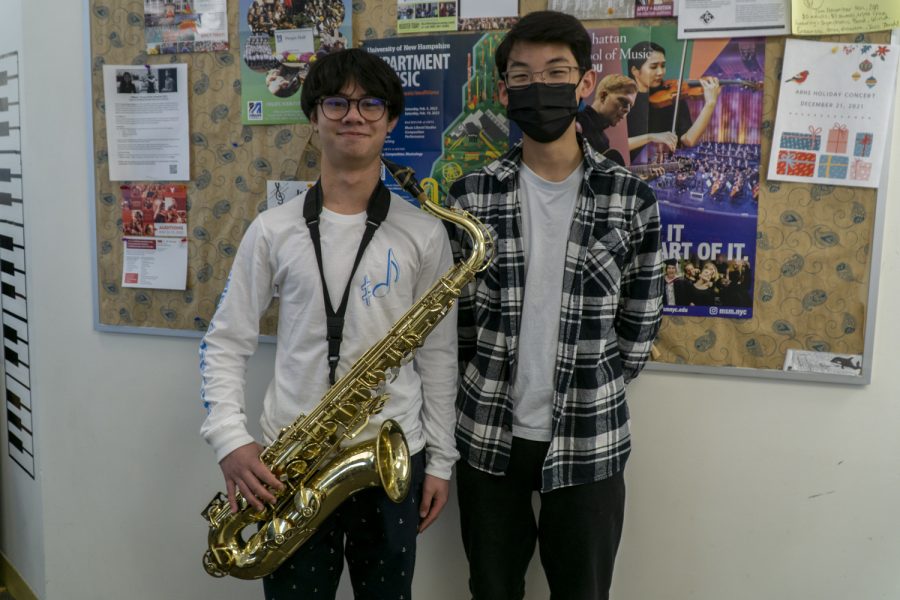 Sophomores Oliver Kubik, who plays the tenor saxophone, and Elliott Yee, who plays the upright bass, make up a jazz duo who perform live music at local restaurants.

Sophomore tenor saxophone and upright bass jazz duo Oliver Kubik and Elliott Yee performed live at Sapporo Korean Kitchen & Sushi in Westborough on Friday, March 18. The duo has been practicing together and performing live music at local restaurants over the past year.

Kubik, who started doing gigs in Boston with musicians from Berklee College of Music two years ago, first had the idea to ask local restaurants to perform.

“My first live performance [two years ago] was with my past friend who is a guitar player at Berklee and it did not go well since I never performed live before,” Kubik said. “I had a fun time as I improved and met more people, and wanted to bring that experience here.”

The duo’s first performance was joined by junior Cam Jackson on piano and senior Declan Kerrigan on drums at Casta Diva in December. They are not paid for their performances but are able to make tips.

“We got a lot of tips and good food,” Kubik said. “Sometimes you don’t get [any tips], but it’s still good for the experience.”

To prepare for their performances, Kubik first organizes the setlist and sends it to the musicians for feedback and practice. He usually organizes the setlist in cycles based on variety. For example, he will start off with upbeat tunes, then transition into slower ballads. After practicing their individual parts, they come together to rehearse.

“For the [gigs] I’ve had in Northborough, it has all been places I’ve worked at so far,” Kubik said. “Other places I’ve asked and just didn’t get a response from, but you keep asking until you get an affirmative yes or no.”

The duo had an audience of over 30 of their friends and family at Sapporo, as well as many diners at the restaurant, as Sapporo advertised the event on Facebook.

“It was pretty last minute since it was the Grand Karaoke Opening for Sapporo, and our drummer and pianist weren’t available,” Yee said. “It was definitely different from our gig [at Casta Diva] since it was just us two, but nevertheless it was still a fun experience.”

The duo’s next gig is at Sapporo on Friday, May 20 from 6:30-8:30 and they will be joined by two Westborough students, junior Sam French on piano and senior Rowan Cheyne on drums. They may continue to perform at Sapporo for live music events over the summer.

“I definitely want to pursue music beyond high school and I’m planning on going to a music college,” Kubik said.