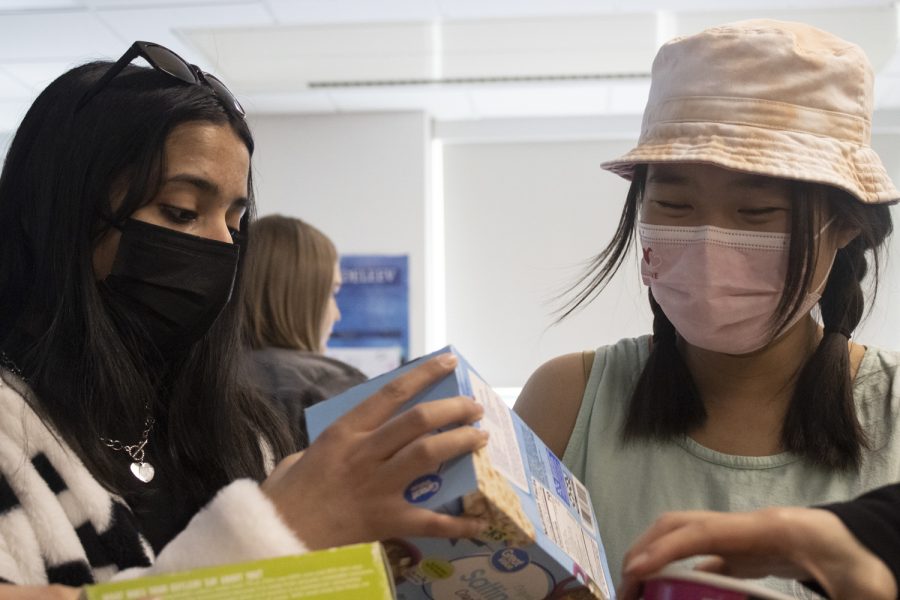 Suha Ashfaq (left) Arielle Chin (right) looking over at the many food donations from other classrooms in the school.

Founded by sophomore Arielle Chin, the new Girl Up Club focuses on empowering women, doing volunteer work in the community and educating others on feminism.

The club not only works towards clarifying the meaning of a ‘feminist,’ but it also helps the less fortunate. Chin was unsatisfied with the clubs currently offered at Algonquin, so she decided to create one of her own. She learned about the Girl Up organization, which helps guide young female leaders to advocate for women’s empowerment within their community.

“I was on the bus one day with a friend, and we were talking about starting a club,” Chin said. “The idea didn’t really blossom until we started doing research on this online organization that was promoting female empowerment.”

The club currently consists of six members, and they are in the process of recruiting more. Students can sign up by scanning the QR codes hung around the school or through the group’s Instagram account. So far, the club has made informational posters about women’s history month, but this is just the beginning.

“We’re doing stuff to help spread awareness for the LGBTQ community, and we’re doing more about helping children and families in poverty,” Chin said. “We’re also thinking about doing a fundraiser with a plant shop [Moon River Botanicals in Northborough] to help with our proceeds.”

Members are currently doing a service project for Abby’s House, a women and children’s shelter in Worcester. Students can participate in the donation drive by donating food pantry and shelter items, hygiene products and office supplies to several labeled boxes around the school.

“I think we all want to be able to do some more service projects and just talk more about different topics,” Chin said.

According to club member freshman Ela Or, the club is a platform for students at Algonquin who want to advocate for issues not typically covered in the school’s curriculum. She believes the club allows students to have more freedom compared to other clubs when it comes to activities.

“A lot of clubs are based on school subjects, but because this is based on a movement, we get a lot more creative freedom with it,” Or said.

The Girl Up Club meets every other Wednesday in D-217 at 2:30 p.m. after school. The club strives to be welcoming and diverse, and is open to any student who wants to join, both male and female.

“It’s for anyone who’s interested in the feminism movement and spreading that around the school,” Or said.

While, according to Chin, it has been hard starting a new club towards the end of the school year, the club has promising future plans to make Algonquin and the community a more progressive place.