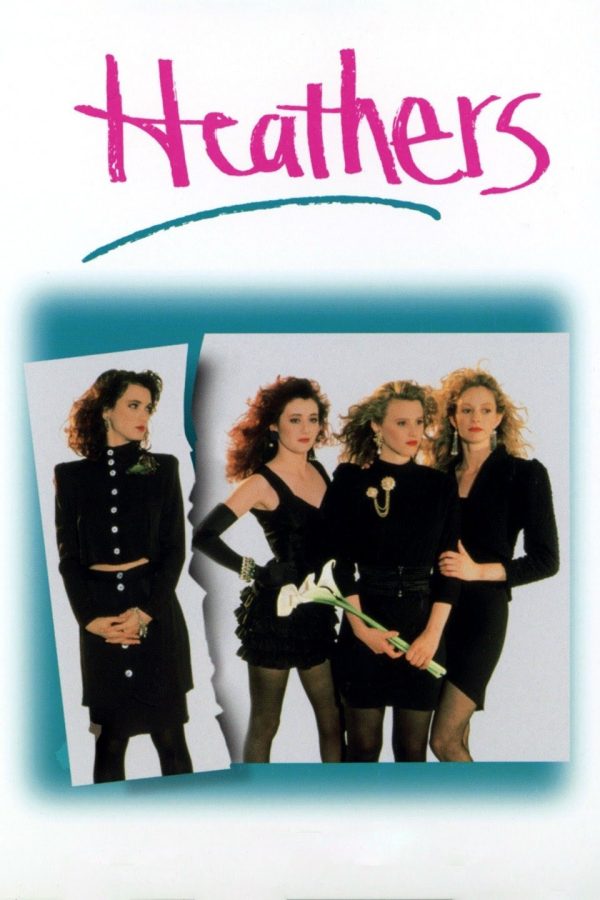 Greetings and salutations! This month I watched Heathers (1989), directed by Michael Lehmann. This film is one of my favorites because of its abundant use of color theory along with the use of tones and hues to convey a story under the surface of the film.

This dark comedy film follows a teenage girl named Veronica Sawyer (Winona Ryder) who is a part of a clique called the Heathers, a group of girls who are beautiful and influential. This clique consists of Heather Chandler (Kim Walker), Heather Duke (Shannen Doherty) and Heather McNamara (Lisanne Falk). Despite being accepted into the most seemingly desirable group of popular girls, Veronica isn’t happy with her life in this clique–until a new boy, Jason Dean, also known as JD (Christen Slater), changes her life for the worse. Long story short, he leads Veronica to become an accomplice in his murders of the popular people at the school.

One of the most crucial film techniques used constantly throughout the film is color theory which is used to focus colors on certain characters. The main colors used are red (Heather Chandler) which stands for the power she holds in the school, green (Heather Duke) that symbolizes her envy for Heather Chandler, yellow (Heather McNamara) for her timid nature compared to the other two, blue (Veronica Sawyer) for her thoughtful and genuine personality and black (JD) to show that he is hiding something. These colors are seen at the very start of the film to show the dynamics of each character and continue throughout the film..

One thing that displays the story’s progression is JD constantly incorporating Veronica’s blue into his outfits as a way to make him seem similar to her, yet he goes back to his signature color when he is in a murderous state. The color in Veronica’s clothes seems to darken as the film goes on, but begins to get lighter as she regains her sense of self once again.

Something that appears to follow the characters is their signature colors in the sets. A scene that perfectly shows this is after a party with Heather Chandler and Veronica. The blue light begins to overwhelm red fire outside of the party, which coincides with the argument that Heather and Veronica are having. This color shift subtly symbolizes that Heather’s time is running out and that she will be dead soon.

The driving force of the comedy in the film comes from the script’s constant use of sarcasm with Veronica who says “You’re beautiful” as an insult to people who she sees as phony. This script also allows her to deliver the iconic line of “Dear diary, my teenage bullsh*t angst now has a body count,” after the deaths of some of the most popular people in her school through her narration. Her narration is not constant throughout the movie, but rather in concentrated areas of time. It’s formatted in the way as if she is reading from her diary. The times we get these narrations, there are shots where Veronica is writing in her diary. This almost alludes to the fact that she lets her intrusive thoughts win as more deaths occur.

The score is one of the most important aspects in the film because of the unsung hero driving the story. One of the first things the viewer hears when introduced to JD is this mysterious score in the background that makes both the viewer and Veronica have some curiosity about him. His theme is later changed to one of that is spine-chilling when he has become murderous. The film isn’t music-heavy, but the minimal amount that is in the film moves the story along perfectly.

The film is edited with quick cuts that place the focus mainly on the person who is speaking. These quick cuts are apparent in the scene where Heather Chandler conducts a lunchtime poll.  It cuts from each person’s answer to her poll question, “You win five million from Publishers sweepstakes, but on the same day what’s-his-face gives you the check, aliens land on earth and say that they’re going to blow up the world in two days. What would you do?” In certain shots, the viewer can see that Veronica is detached from the Heathers as they terrorize the student body. She herself is cut off by walls and she then moves away to create even more of a divide. The cuts in the movie also bring humor, one being when Heather Duke is throwing up and Heather Chandler gives the snarky remark of “Come on Heather, let’s take another look at today’s lunch,” then cuts to the lunch of the day being thrown out.

This film is very much worth the watch as the film is directed phenomenally. This satiric film is one that everyone needs to watch once in their lives, and I recommend watching it at least twice to fully appreciate the editing and different film techniques that make the film entertaining.