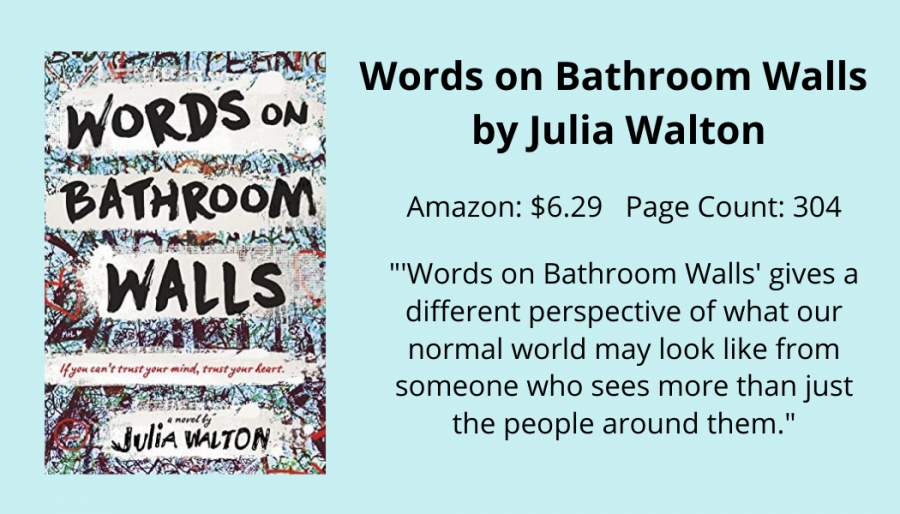 Staff Writer Joceline Giron writes that "Words on Bathroom Walls" is an enjoyable read which provides insight on a life with mental illness.

In Julia Walton’s book, “Words On Bathroom Walls,” a teenage boy’s normal day in chemistry class turns upside down when he is diagnosed with schizophrenia. This results in a lovely story that gives a realistic view of the burden of mental disorders on teenagers.

After his diagnosis, protagonist Adam Petrazelli becomes a part of a clinical trial for the fictitious drug, ToZaPrex, to see if it would change any of his symptoms. While he is on this clinical trial, he has to keep journal entries after each of his sessions on his condition. When reading his entries of how his life is changing due to the drug, you can almost feel a sense of hope that he would be free of his hallucinations, as if you were someone who was close to him.

However, right as he is starting to keep record of how he feels while on this drug, he is admitted into a religious private school for his senior year, where he isn’t allowed to disclose his condition. At this school, he meets a girl named Maya who doesn’t care that he has schizophrenia. She allows him to be himself while helping him realize that he is more than just his condition.

In her acknowledgement for “Words On Bathroom Walls,” Walton states that she isn’t a doctor, but she did research to a great extent on schizophrenia, even including someone with a direct personal experience to be a beta reader and talking with doctors to create a realistic clinical trial.  She also created a fictional drug ToZaPrex from real life supplements that are meant to suppress episodes. With all of her research, she created a realistic and beautiful story.

This book brings a unique look into mental health, and it allows the reader to see a new point of view from someone who suffers from schizophrenia. It shows the effects that it can have on youth and how they go about the world. The reader can relate to Adam and how he just wants to be normal.

The story was adapted into a film last year, and it can be streamed on Amazon Prime and Apple TV. I personally enjoyed the book more than the film since I could envision the characters myself. The film also adds a bit of a romantic aspect to a bittersweet story.

”Words on Bathroom Walls” gives a different perspective of what our normal world may look lik5 from someone who sees more than just the people around them. It is my comfort book that I think people would really enjoy.