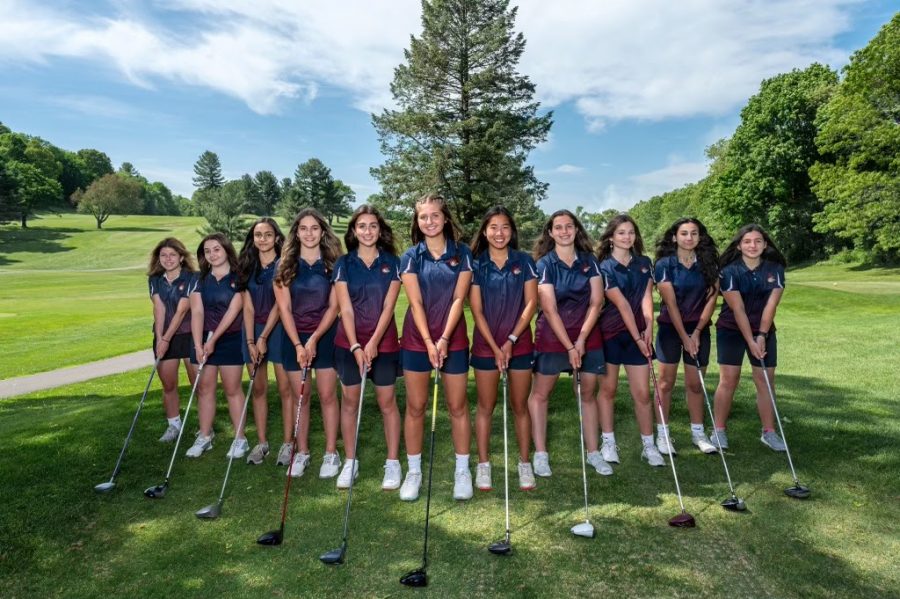 The girls' golf team ended their season with a 9-0 record, taking them to the Central Mass tournament where they became Central Mass champions.

The girls’ golf team has led a successful season thus far, earning a 9-0 record heading into their first playoff match on June 21 at Nashawtuc Country Club.

The 11-player team is a co-op program with Westborough High School. The girls were excited to begin this season due to their cancelled season last year.

“We started off practicing with masks and then the mandate got lifted, so we’ve had normal practices and normal matches, which has been really nice for all of us because none of us got a season last year,” junior Eleni Christakis said.

This season has been similar to past seasons, except for the shift in the time frame.

“Because of the Fall 2 season, our season, as others as well, has extended deeper into the school year,” coach Sandra Robichaud, who is from Westborough, said in an interview via email. “It has caused the girls to change their summer plans for a short time.”

Despite this change, the team has been able to come together and work collaboratively to have a great season.

“[The season] has been really good,” Christakis said. “We have had a really good team, and everybody has improved a lot.”

This season, the team earned the title of  Central Massachusetts champions, which they earned in 2019 as well.

“I’d have to say up to now, [the standout moment] is our Central MA win at Juniper last month,” Robichaud said. “There were many strong teams and the girls were able to bring out their best play on that day. To be able to repeat was a great feeling.”

Christakis scored the lowest on the team at the Central Massachusetts match, which substantially helped her team achieve this win.

“The Central Mass tournament was huge for all of us,” Christakis said. “I personally had the lowest score on our team, and then once all the scores were added up together, we ended up winning. So, just having that feeling of ‘we actually can do this’ and we are a great team and we work together, it was really rewarding.”

Robichuad is looking forward to the postseason competition that comes towards the end of the month.

“We have the Sectionals on [June 21], and should we play well enough to be one of the top three teams, we would go onto states on the 29th,” Robichaud said.

As for the next girls’ golf season, Robichaud is excited about a solid returning team..

“I have many strong players returning next year so I am looking forward to it [next season],” Robichaud said.