THE ALGONQUIN HARBINGER • May 6, 2021 • https://arhsharbinger.com/25798/profile/decosmos-soap-making-a-labor-of-love/ 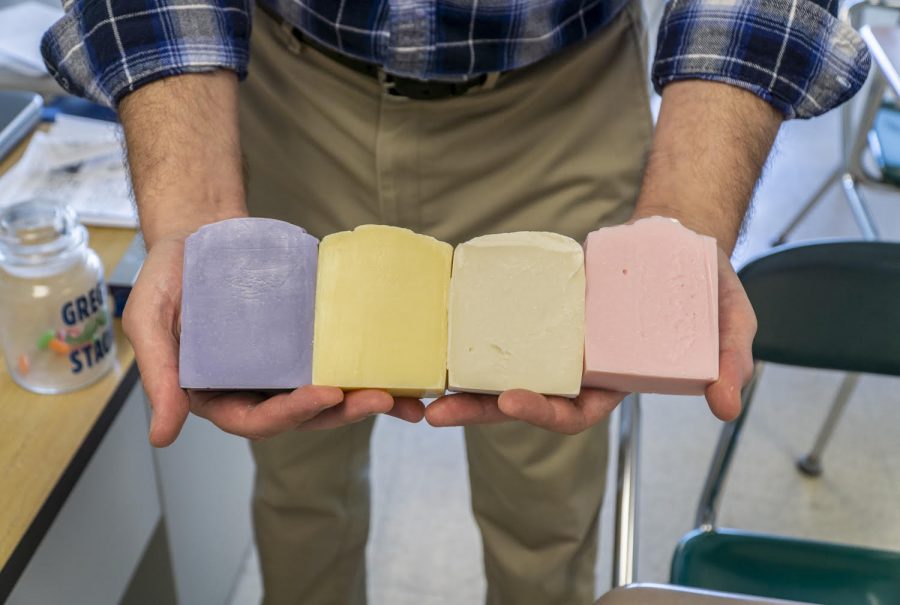 Social Studies teacher Gregory DeCosmo’s time at local farm stands has led to him delving into the world of dangerous chemicals and finding a passion for soap making.

DeCosmo’s journey into soap-making stemmed from a conversation he had three years ago with the owner of a small soap stand in Grafton, Mass. called “It’s Only Chemistry.” DeCosmo was drawn to the man’s business because he thought soap making sounded like an interesting process. He quickly connected with the man over a shared love for American History.

DeCosmo’s “Washington-Adams ’89” shirt, which is a joke about the 1789 election (since Washington and Adams never actually ran for office), was what initially forged his connection with the man who became his soap-making mentor.

“So I’m wearing the shirt and [the man selling soap] asked me, ‘Do you want me to tell you how soap helped start the American Revolution?’ and I told him that I teach US History and the dude nearly falls out of his socks,” DeCosmo said. “So we talked American History and its relation to soap making for a while. And then I was picking his brain to get the gist of how to make soap. So he gave me the overview and then I went home, started watching YouTube, slowly picked up all the stuff you need and then made a couple batches.”

After the first couple batches, DeCosmo took to soap-making and quickly set up a small-time operation in his basement where he usually makes around 96 bars a batch. DeCosmo says he tends to make floral or fruity scents to appease his mainly female clientele, but also uses a variety of more musky and plain scents.

“The most givable gift there is, is soap,” DeCosmo said. “There’s nobody who doesn’t use soap. Guy, girl, construction worker, ballerina, everybody. If you have a good bar of soap that smells good and makes you feel fresh, then that’s good living.”

Aside from soap making, DeCosmo also dabbles in pickling, sauces and soups. Every year he makes a wide range of foods that he gets to enjoy himself and share with others at the farm stands.

“As of right now, I’ve got my own homemade tomato soap, tomato sauce, applesauce, yellow and green pickled green beans, bread and butter pickles, hot and spicy pickles,” DeCosmo said. “Pickled stuff is wicked good to me. I really love pickles. And anything you get locally and make yourself is far superior to anything bought at a store.”

DeCosmo never started any of his side passions for money, but rather focuses on making others happy and feeling good about his product at the end of the day.

“That [soap making]’s a labor of love,” DeCosmo said. “It costs me $2.50 in materials to make a bar and I sell the bars for $5, so I make a couple bucks on each one. I would say at the end of the day I’m getting minimum wage or less. So this is not a money-making scheme and it gives me much more pleasure to give them away than it does to sell them, so I give away a ton of them.”