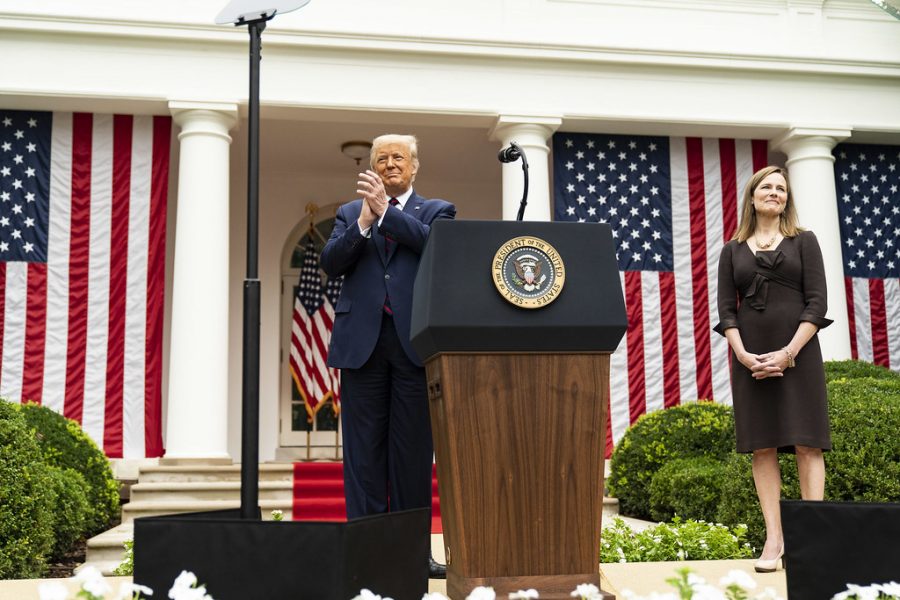 "President Trump Nominates Judge Amy Coney Barrett for Associate Justice of the U.S. Supreme Court" by The White House is marked under CC PDM 1.0. To view the terms, visit https://creativecommons.org/publicdomain/mark/1.0/

Confirmed on Oct. 26, the newest addition to the Supreme Court Amy Coney Barrett will likely push for conservative policies.

President Donald Trump’s Supreme Court nominee Amy Coney Barrett was confirmed on Oct. 26 to replace the late Justice Ruth Bader Ginsburg following a unanimous vote from the Senate Judiciary Committee. Now that she has been confirmed to the Supreme Court, liberals fear and conservatives hope Amy Coney Barrett will attempt to make many changes, pushing a conservative agenda in the United States.

Barrett joins the court with a range of experience. Prior to being confirmed to the Supreme Court, Barrett worked as a judicial law clerk for Judge Laurence Silberman from 1997-98, then for Justice Antonin Scalia from 1998-1999. Proceeding her time as a judicial law clerk, Barrett went on to practice law for Miller, Cassidy, Larroca & Lewin and Bolts, then provided research for Bush v. Gore from 1999-2002. From 2002-2017 Barrett taught law at the University of Notre Dame. After teaching, Barrett served on the Seventh Circuit U.S. Court of Appeals.

In order to truly get a sense of what to think about the newest Supreme Court justice, it is important to look at Barrett’s stance on some controversial issues in the U.S.today.

The biggest and most widely reported issue on social media is Barrett’s stance on abortion. In an article she wrote in 1998 while at Notre Dame Law School, Barrett stated that she believes that abortion is always immoral. However, before being confirmed to the Supreme Court, Barrett made it clear that she does not believe Roe v. Wade should be overturned, but should be slightly modified instead, making it more difficult for women to receive late-term abortions. According to a Harper’s Bazaar article, in a 2016 talk at Jacksonville University Barrett said, “I think the question of whether people can get very late-term abortions, you know, how many restrictions can be put on clinics, I think that will change.”

Like many conservatives, Barrett is an advocate for the protection of the Second Amendment. Barrett has made it clear that she does not intend to limit who can and cannot purchase a firearm, and may, in fact, make it easier for some to be able to get one. An October 2020 NPR article says, “In essence, Barrett concluded that historical precedent led to the conclusion that only people convicted of dangerous felonies should lose their right to keep and bear arms. The judge left open the possibility that others convicted of misdemeanor charges — on, for instance, domestic violence — should lose their gun rights for some time.”

Similarly to President Trump, Barrett is strongly against illegal immigration. Many believe that as a member of the Supreme Court, Barrett may make it much more difficult for immigrants to seek asylum. According to an October 2020 blog by Human Rights First, “Barrett has overwhelmingly affirmed decisions denying asylum and other forms of relief to immigrants.”

Justice Amy Coney Barrett is a person with a perspective on many issues in the US, and will likely make a push to implement more conservative policies moving forward in her time in the Supreme Court.