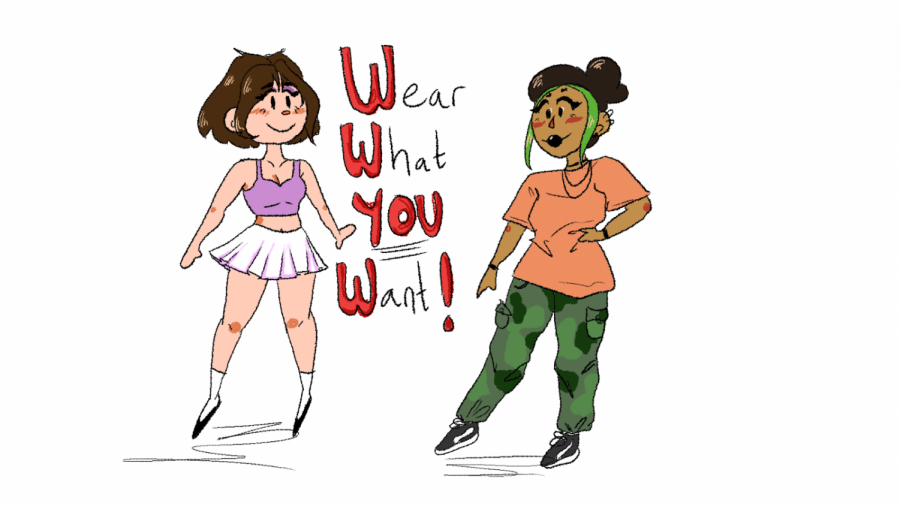 Assistant Opinion Editor Jula Utzschneider writes that students should be able to wear what they chose as dress codes can make students feel insecure in their own bodies.

Skirts must be below your fingertips; low-cut shirts are unacceptable; tank-top straps must be a specific width; leggings are not pants—these are some examples of school dress code rules throughout the country, and I have started to wonder if these rules are causing low self-esteem in girls.

Although these rules are not specifically listed in the Algonquin dress code and do not affect students at our school, they appear in many schools throughout the country.

I understand that people should be dressed appropriately, but this is subjective to the person wearing the clothes. I’m not necessarily saying that dress codes themselves are bad, I’m saying in many cases the implementation of them needs work.

I have observed that, in many cases, students being dress coded or talked to about their clothes takes up class time, and even worse, makes them feel like there is something wrong with their clothing choices or their bodies themselves.

These messages create a negative school environment for students whose choice of clothes goes against established norms.

“The Pudding,” a digital publication that explains controversial topics, did a study in 2019 of 481 high schools in America, and found that 77% of these schools ban the exposure of certain body parts, some of which are understandable, but others make no sense.

For example, a students’ exposed midsection or midriff  (the area between your chest and your waist) is not allowed in 71% of schools, making it the most banned visible body part by a long shot.

This is extremely confusing to me. I don’t understand why so many schools would specifically ban the visibility of midriff, a non-inherently sexual body part by nature. Yet only 1% banned the exposure of genitals, which, although in many cases would be covered up purely out of common sense, even the rare instances still seem like more of an issue than seeing someone’s bare stomach.

In addition to this, many of these dress code rules are targeted specifically toward girls (or people shopping in the girls’ section), who are more likely to be sexualized than boys. Students wear clothes that make them feel comfortable, and schools shouldn’t be allowed to tell them to change who they are.

The American Psychological Association (APA) defined sexualization, and part of the definition states that sexualization occurs when “a person is sexually objectified—that is, made into a thing for others’ sexual use, rather than seen as a person with the capacity for independent action and decision making; and/or sexuality is inappropriately imposed upon a person.”

They acknowledge that anyone can be sexualized, but that girls are the most likely to be, partially due to the fact that they are more likely to wear clothing exposing certain body parts (like midriff or cleavage) than boys are, and these rules target the exposure of such body parts.

But some schools don’t just ban the exposure of body parts, they also prohibit specific items of clothing.

In 60-70% of schools, “short skirts” and “short shorts” are banned, which is extremely vague, especially considering that the same skirt or shorts may appear longer or shorter on someone depending on their body type.

For example, the Algonquin dress code says that “clothing should sufficiently cover the torso, chest, legs and back,” which leaves the judgment call on what is appropriate and what isn’t up to the teacher or administrator. This can lead to some people being dress-coded while others, often wearing something similar, go under the radar.

This can make those dress-coded feel insecure about their bodies or the clothes they chose to wear. The decision of whether or not they should get dress-coded often leads to sexualization of them, more often than not, affecting girls with more mature bodies.

I believe that, generally, if students are left to choose their own clothing and not have rules that restrict them, they will make the right call. Students wear clothes that make them feel comfortable, and schools shouldn’t be allowed to tell them to change who they are.

Words matter. Telling someone that they shouldn’t show a certain amount of skin or wear something can lead them to feel insecure or uncomfortable with their own bodies, and they shouldn’t have to feel bad because of someone else’s opinion.