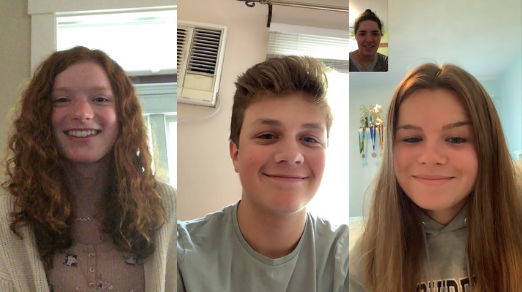 Sophomore Lee Gould, sophomore Jonathan Valentine, and senior Maeve Grandpre among others, reflected on their the first day of school.

The Harbinger editors spoke via Facetime with students about their first remote day back to school on Sept. 16, 2020. Those interviewed are pictured via screenshots and selfies.

1) How did your first day of school go?

2) What are things that worked or didn’t work?

3) Are you hopeful for how remote and hybrid will go? Why?

1) “It was pretty good. I thought it was kinda boring sitting on Zoom all day though.”

2) “Something that worked was that it was easy to access all the Zooms, but what didn’t work was that some people’s mics were hard to hear.”

3)“I’m excited to go back, but I’m also not that excited because a lot of my friends aren’t in my cohort.”

2) “Something I thought was difficult was when the teacher was screen sharing but also expected us to be doing something on our computers. It was kind of hard to do.”

3) “Yeah, just because I want school to be decent. I don’t care too much; I just want it to be better.”

1) “It was okay. There was so much time between classes because all the teachers ended early, so we were doing nothing.”

2) “Breakout groups worked, but we didn’t really do much.”

3) “No. Last year didn’t go well, so it will probably be the same this year.”

1) “I think it depended on the teacher, some had the first day of school high energy. Other teachers just kind of talked while we sat there muted.”

2) “A lot of my teachers did polls which was nice because you saw the feedback right away. Some teachers also used breakout rooms which were good to get to talking with classmates. What didn’t work was the chat because we just submitted them to our teachers, so we didn’t get to learn much about our classmates.”

3) “I really hope hybrid goes well so we can be in the classroom. And I’m hoping remote goes well, and they can create that classroom environment. I’m hoping the hybrid will last too. It’s nice we see their rooms even if they’re empty.”

1) “Good. I liked seeing everyone, but I didn’t like how I couldn’t see them in person. It’s annoying because it looks like I’ll have really good classes, but once hybrid starts I won’t get to see half of the people in person.”

2) “All the Zoom calls went well, but I just didn’t like how I couldn’t see everyone in person.”

3) “I think it will be good to see everyone again when we go to hybrid classes because we haven’t seen them in a very long time.”

1) “Pretty good, I guess. It was mostly introduction stuff.”

2) “I think time management is important: getting to and from each class and making sure you set your alarm to wake up, brush your teeth and get to your first class.”

3) “I don’t really mind it. Of course in-person would be ideal, but it seems like they have a better thought-out plan than in the spring, so I’ll be able to learn stuff and be productive.”

1) “I thought it was pretty good considering that it was online. The day actually went by quicker than I thought. Basically, it wasn’t as bad as I thought it would be.”

2) “I was in a lot of breakout rooms, and I thought those were good.”

3) “I’m hopeful because I think the teachers are a lot more organized for remote than they were in the spring, and I’m excited to get back in the building for hybrid.”

1) “It was fun. The teachers were very welcoming, but I was frustrated because there were some problems with my schedule, and I don’t think I can fix them.”

2) “The teachers are doing a good job taking advantage of the sharing screens feature. The only thing that went bad was having to stare at a screen for six hours a day.”

3) “Hybrid is going to be weird and probably not that good. I’m not very hopeful.”