Community comes together in support of Black Lives Matter movement 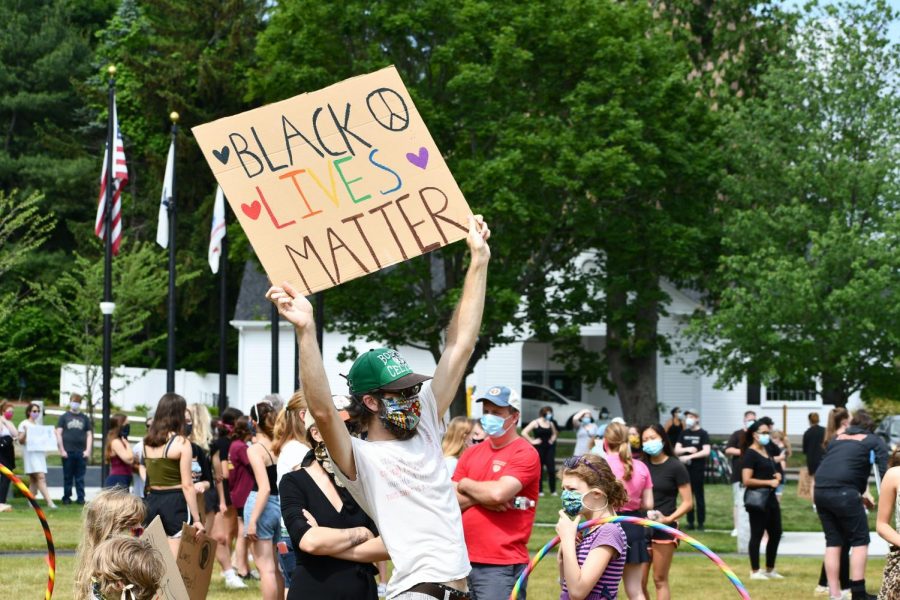 In a gathering at the Northborough Town Common, hundreds came together to peacefully protest police brutality and racial injustice.

Approximately 400 residents from Northborough and surrounding towns gathered at Northborough Town Common Park Saturday morning, June 6, to protest and mourn the death of George Floyd, along with countless other African Americans that have been murdered by the police.

This was the second gathering in Northborough to honor George Floyd, with the first being a vigil on May 31.

“It’s such a pressing cause at this time, and I was thinking about what I could possibly do to help,” junior Kathryn Zaia, one of the organizers, said. “When Sarah [Saeed] approached me with this idea, it just immediately seemed like the right thing to do, and it seemed like a good way to respond to everything that’s going on.”

Junior Sarah Saeed and Zaia organized the protest because they felt it was their responsibility to do what they could to support the Black Lives Matter Movement.

According to Saeed, the goals for the event were to spread awareness and ask people to take action.

“We wanted to tell people that their activism shouldn’t stop at acknowledging the issue; they need to take action,” Saeed said.

Saeed asked Zaia to help because of her experience with planning and attending protests.

“Over the past couple of years I’ve gone to a lot of protests, and my mom has a good amount of experience organizing gatherings and demonstrations in Northborough, so I’ve been around that kind of organization,” Zaia said.

Peter Soboyejo, a member of the ARHS Class of 2019, was shocked by the number of people that showed up.

“I think it is great seeing this support throughout the entire town,” Soboyejo said.

In addition to the protesters, Soboyejo felt extremely uplifted by the supportive honks that came from most of the cars that passed by the park.

For the first hour of the protest, students read speeches regarding the state of our nation and about systemic racism.  These speeches prompted both sadness and applause from the crowd.

Junior Edna Kinyanjui wrote a poem to read aloud about her experiences growing up as an African American woman in a predominantly white society.  According to Junior Ken Cox, the poem was very powerful and had a lasting impact on many attendees.

“Edna’s message gave me and everyone who listened a better understanding of her perspective and got me thinking about how I can be part of the constructive solutions to help those who are hurting right now,” Cox said.

Massachusetts Senator James Eldridge also attended the demonstration and was there to stand with his constituents.

“I am here to protest the killing of George Floyd… And [the killing of] thousands of other black people,” Eldridge said.

In addition to Eldridge, two candidates for the State House were in attendance: Ceylan Rowe and Jeanne Cahill. Both acknowledged that there is a lot that must be done and pledged to do their part if elected.

“There is so much we need to do,” Rowe said. “…There is such a small percentage of legislators who are people of color, and white allies are not enough.  We need to hear more stories from people of color in order to create the change we need.”

Cahill believes that now is the time to act against racism.

“I think our hearts fractured open with the events of Geroge Floyd and it enables us to do the degree of change that is needed for our entire system,” Cahill said.

Saeed and Zaia were aware of perceived risks that could have come with two non-African Americans leading the protest but still felt that it needed to be done.

“We wanted to make it clear that neither of us is trying to speak for the black community in any way, and this whole event is to raise up black voices,” Saeed said.  “We know it’s not our place to speak for them.”