THE ALGONQUIN HARBINGER • May 30, 2020 • https://arhsharbinger.com/22383/ae/abcs-of-chinese-food-how-to-make-scallion-pancakes/

ABC’s of Chinese Food: How to make scallion pancakes 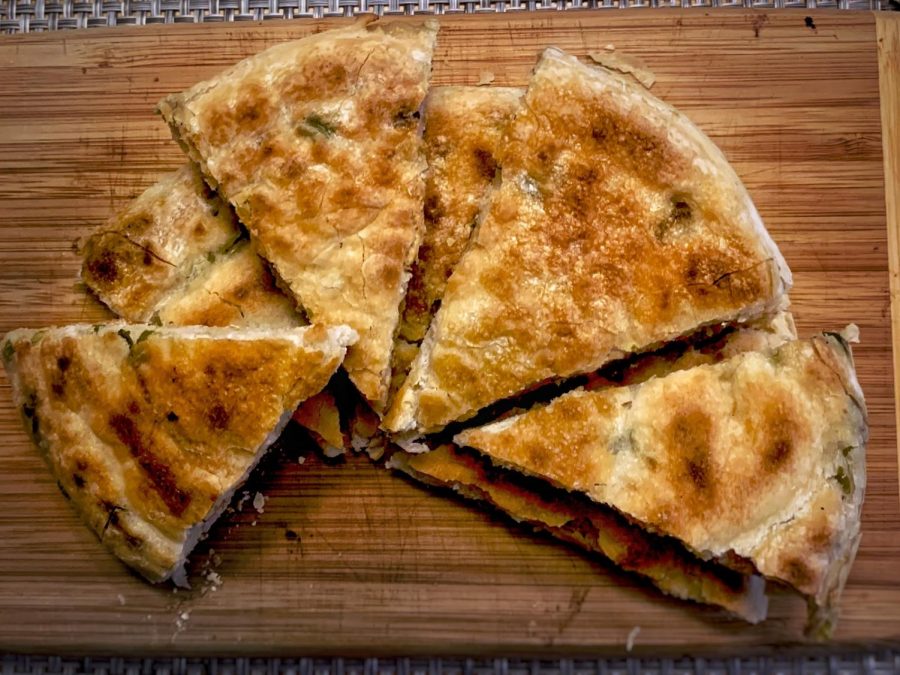 The best way to eat scallion pancakes is to serve it sliced into triangles like a pizza with a delicious dipping sauce.

If you have been growing scallions during quarantine, you might be finding yourself with an overabundance of them. What should you do with them? Make scallion pancakes!

1) In a large bowl, slowly stir the boiling water into the flour until a shaggy dough forms. Knead until it forms a smooth dough.

2) Cover the dough with plastic wrap and let it rest for about an hour.

3) Divide the dough into eight portions. Roll each portion out on a lightly floured work surface into a thin circle (around 10 inches in diameter). Brush with oil and sprinkle on about ¼ cup chopped scallion. Sprinkle on salt.

4) Roll into a thin cylinder, so it forms a long log. Then take one end and wind the roll into itself to form a coil, similar to how you would roll up a cinnamon roll. It should look similar to a snail’s shell. Flatten slightly with palm. Roll each coil into a ⅛ inch thickness.

5) Heat 1 tbsp vegetable oil in a skillet. Over medium-high heat, cook 1 pancake at a time until golden brown and crisp on both sides (around 2 minutes for each side).

6) Mix together 3 tbsp rice vinegar, 2 tbsp soy sauce, 1 tsp chili oil, and a pinch of chopped scallions in a small bowl as a dipping sauce for your pancakes. Enjoy!

Tip: You can freeze any extras that you don’t cook in a Ziploc bag and save it for another time. Fry it in a pan, just as you would non-frozen. It will just take a little longer.