Three crew members of the show Hadestown share their experiences 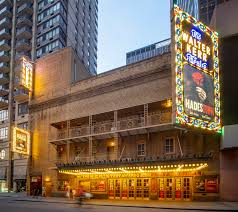 The Walter Kerr Theatre in New York City where Hadestown is performed. Assistant Stage Manager Cherie Tay, head electrician Patrick Medlock-Turek and Assistant Carpenter and Automation Operator Spencer Greene share what it's like to work backstage on this show.

The people in this article were interviewed remotely by a group of student journalists through a homebound journalism project from the non-profit Headliners in Education.

The musical Hadestown opened on Broadway on April 17, 2019, at the Walter Kerr Theatre and became a sensation taking home eight Tony awards. Through their hard work and dedication, this brilliant crew has made this and so many other shows successful.

The musical follows the stories of Orpheus, Eurydice, Hades and Persephone. They are Greek gods whose stories come together in the underworld.

Most days they have one performance, however Wednesdays and Saturdays they have two. Throw in rehearsals and press and it’s clear that Assistant Stage Manager Cherie Tay and the other crew members’ days begin differently. If it’s a show day, Tay arrives around two hours before curtain and begins doing her routine jobs. These jobs include printing sheets which tell who is there or not there for the day’s performance which are posted in different areas backstage for the crew. Tay also makes stuffers for the Playbills which tell who is playing what roles that day and Tay presets props.

Before each show, Head Electrician Patrick Medlock-Turek, checks every light and there’s a lot of them. After, Medlock-Turek sets the lighting look, which are the lights that the audience will see when they enter, about five minutes before doors open. Meanwhile, Assistant Carpenter and Automation Operator Spencer Greene checks the automation within the sets.

“The set of Hadestown is broken into three pieces and two of those pieces move,” Greene said. “They open and close throughout the performance, so what we want to do is we make sure that those pieces move.”

In addition, Greene also checks to make sure everything sounds right and moves at the right speed. He then reassembles the set for the beginning of the show. During the show, Tay will either call the show which is where she relays cues for sound, lighting, actors and so on. Tay might also run deck which is when she oversees that everyone does what they need to do or do office work which is paperwork for coming weeks that has to do with musicians, actors and so on. Meanwhile Medlock-Turek and Greene listen for cues telling them to press the buttons that will cue the lights or automation.

Also, theater work looks different depending on whether it’s a long-running Broadway show, a tour or a regional production. With long-running shows, there’s more planned and routine maintenance whereas with a limited run show little things like a slightly dim light or a slightly faded prop are not as much of a priority.

According to Tay, touring with a show is no easy feat. It’s much different from Broadway and sometimes the sets don’t even fit in a theater.

It’s especially important to make connections with those around you when working on a touring show because you are stuck with these people for weeks or months at a time.

“If you fail to make a good impression on those people it’s gonna make work hard,” Greene said. “We work long hours, sometimes very unpredictable hours, so it’s something that you really need to make sure you get off on a good foot with those people.”

Depending on if the tour is a one-nighter, which plays one night in one city every night, or a sit-down tour, which plays for a few weeks in one city, it can be hard if the cast and crew do not get along.

“We call it a goldfish bowl,” Tay said. “Because you are around these people all the time. So you swim around the castle and you’re like ‘Oh it’s you again’, that’s what it feels like. There’re like, 58 fish in one bowl.”

With long hours, the crew still manages to find time for themselves in different activities. Tay plays ukulele, trombone and does photography; Medlock-Turek uses his free time to use his private pilot’s license, while Greene and his wife set goals in order to spend time with each other.

While they are humble about their achievements and work, the crew is still proud of themselves.

Greene’s proudest moment was when he became a showrunner for the first time. A showrunner is someone who is responsible for the creative choices for the production.

“It felt like I had worked with enough people and on enough complicated shows that they were like ‘Okay this one’s yours,’” Greene said.

Tay’s came to her while standing in the wings at the Tony awards.

“I was just standing on stage at the Tonys as they were doing ‘Wait for Me,’” Tay said. “That was really cool to be like ‘I’ve achieved my goal, I’ve done my dream and I am where I am, doing what I love,’ which is really awesome and I’m proud of myself for doing that.”

Medlock-Turek’s proudest moment was during Hadestown when he was working with the lighting designer who won best lighting for the production. Medlock-Turek had the idea to install the lights a certain way in order to solve an issue they had faced.

“That was a really proud moment for me to be like here I am helping this guy win a Tony award,” Medlock-Turek said.

The long hours and dedication make every show an amazing experience but in order to make it in the industry, it is important to sell yourself.

“It’s really important to make sure that you’re hitting the pavement, making sure people know you, having a great work ethic [and] staying positive, because at the end of the day you’re getting hired based on your skill and your attitude.” Medlock-Tuerk said. “You’re not just a number on a list.”