An inside look at Business of Art & Gallery Studies

Class runs all shows in Gallery of the Boroughs 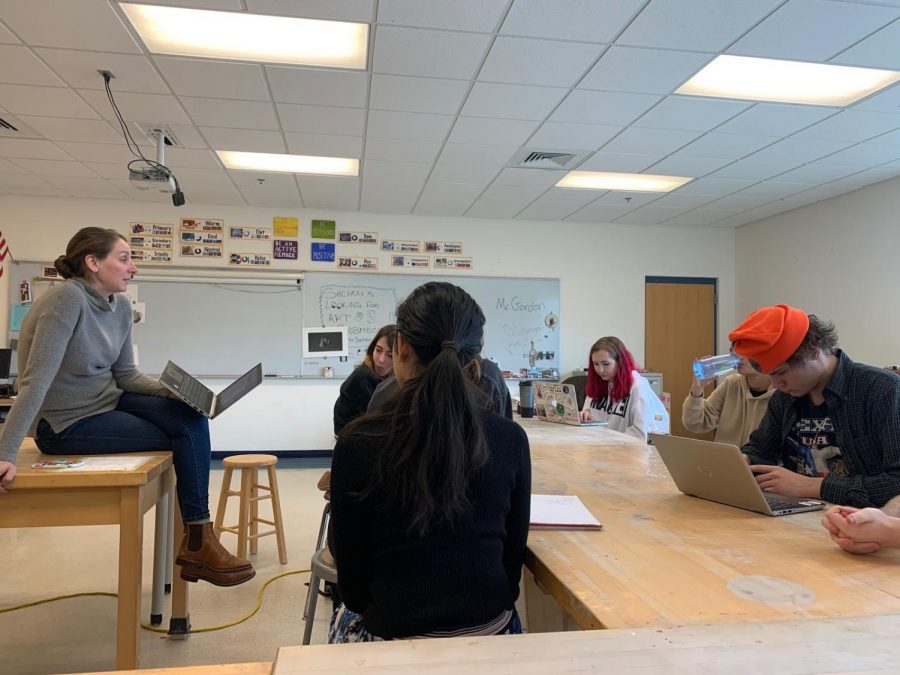 Students work together to put on a show as part of their Business of Art & Gallery Studies class with help from Fine and Performing Arts teacher Danielle DeCiero. All shows put on in the Gallery of the Boroughs is student-managed.

Unknown to many students, the Fine Arts department has a class that combines business and leadership skills with the arts.

Offered only at the honors level and with  a prerequisite of any Fine Arts course, Business of Art & Gallery Studies has been offered for three years but has only run during two of them due to a lack of sign-ups. This semester, the course,taught by Fine and Performing Arts teacher Danielle DeCiero, puts students in charge of managing Algonquin’s Gallery of the Boroughs in C211.

“We’ve had the gallery since 2015, and we’ve been running galleries a couple times a year since then,” DeCiero said. “We always hope to put three or more shows in there a year, but there’s a lot of work that goes into it, so on the semesters that there isn’t a class running it, it falls on a group of kids that want to participate in it.”

The class’s main purpose is to allow students to work as a team to be in charge of what happens in the gallery and utilize the leadership skills that it takes to showcase art. Each student is given a different role which can vary from the business of running a gallery to selecting the actual works of art that will end up in the shows.

“Every year we have one alumni show, which is the one thing we have done consistently from year to year, where we reach out to different graduates post-ARHS and showcase what they’re making,” DeCiero said.

Other than the alumni show, there is at least one other gallery exhibit that is put together. The different art shows allow students to try different roles in the class from Administrator, Public Relations, Event Coordinator, Outreach and Curator.

Those in the Outreach role reach out to artists in the New England area by email after all of the students have agreed on a few different artists that would work well in the gallery.

Senior Alex Cheney is in charge of Outreach.

“I compartmentalize all the artists and email a group of them to see who is interested in sharing their art after we have chosen who we are interested in,” Cheney said. “I also respond to emails with dates for the upcoming shows and coordinate the deliveries of the art.”

Public Relations manages the promotions to acquire foot traffic to the show, while the Event Coordinator handles behind the scene work to allow the gallery to run efficiently.

Seniors Sophia Mehta and Logan Fossey are the Event Coordinators.

“We organize dates for the gallery and fundraisers to help support it,” Fossey said. “We also keep track of the equipment that we have and host the reception when the gallery finally opens.”

The Administrator is in charge of the funding and overseeing the entirety of art shows, while the Curator is someone who is more involved in the arts and the layout of the gallery. Senior Catherine Boush currently holds the title of a Curator.

“One of my main responsibilities as the Curator is to design the layout of the gallery and then hang the art up, but also remove it when the show is over,” Boush said.

Students are able to enroll in the course as many times as they would like, which interests many students after taking the class once.

“I would really love for kids to take this class and feel some ownership in this gallery and the hard work they put in to it,” DeCiero said.

Once an exhibit is ready to be shown, it is open in room C211 during the school day until 2:30 for students and faculty to visit.

“When there is a show, it is open all day, so you can pop in during the passing, mindful moment, or whenever you have time,” DeCiero said.