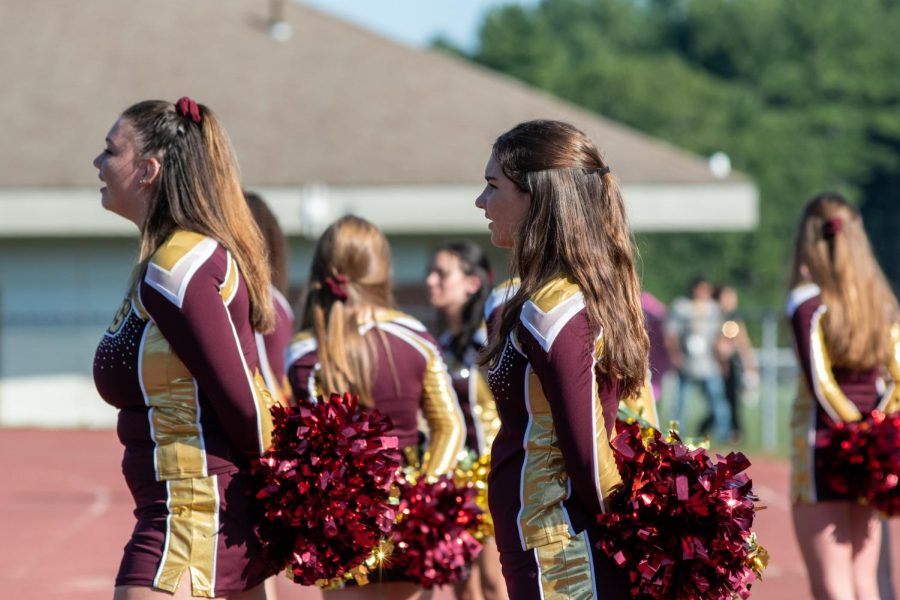 Cheerleaders on the sidelines of the football game on Sept. 20.

With the fall season over, the cheer teams reflect on the last few months with the performance team getting a score of 71.8 at the Division 1 Central Regional Competition, and game day with a score of 107.6 points in the Large Game Day Division at their state meet.

Junior and Performance team captain Lucy McGlynn believes this was a strong season, especially with the advancements the team made.

“Since last year we added so many new skills that the team has never done before, even before I was [on the team], or anyone was. [We] really worked hard to be a positive team,” McGlynn said.

According to McGlynn, the team’s best performance was the second competition of the season.

“We did really well,” McGylnn said. “We hit every stunt. I think everyone landed tumbling. Everything just hit.”

McGlynn also believes there is room for improvement in the future.

“We just need to fix the little mistakes in our routines,” McGlynn said. “That was what really got us this year.”

“[I think we did the best on] Leagues at Wachusett,” Morrissey said, “We had a really big crowd, we were one of the last teams to go on, the crowd was cheering us on, there was more energy.”

“For the most part,  [the season] was successful,” junior Emma Dagg said. “I think we need to improve on being tighter, on the same page and focused.”

Junior Catherine Johnson believes the team has improved throughout the season.

“We did not have the most successful placement at the competitions, but our routine was able to grow and develop with each competition,” Johnson said. “Even though we didn’t place how we wanted to, I think we were successful in creating a routine we were proud of.”

“Maintaining a positive attitude, even if we don’t get the placements we want and working harder to achieve higher skills, harder routine and engaging the crowd at football games, pep rallies and competitions [ will help us improve as a team in the future].” Johnson said.