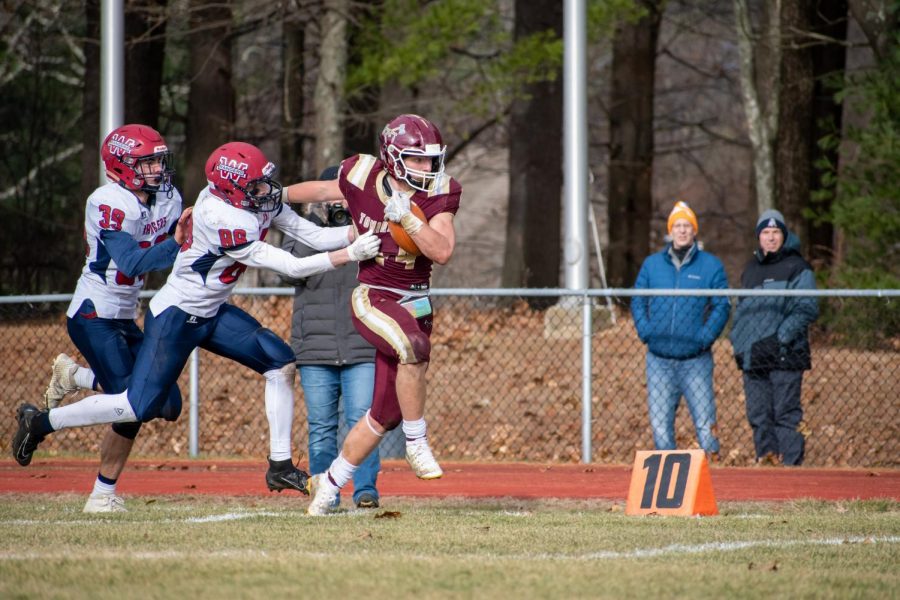 Determined to get down the field, junior captain Rio Ferguson breaks apart from the Westborough defenders and charges towards the end zone. Ferguson ran for 260 with one touchdown as Algonquin won the game 24-7.

Led by junior captain and running back Rio Ferguson alongside several seniors, the football team took down the Westborough Rangers 24-7 on Thursday, Nov. 28 for their first Thanksgiving win since 2016.

Ferguson ran for 260 yards on 25 carries.  The highlight of Ferguson’s day was his 95 yard rushing touchdown in the third quarter to give Algonquin a 16-7 lead.

“I had to come out and put in my all for my seniors and my whole team,” Ferguson said.  “This was our last game and we wanted to finish out strong.”

Senior quarterback Riley Greenwald had a strong day as well, throwing four passes to four different receivers for a total of 53 yards.  Greenwald felt this was one of his best games this season and he will miss this team.

“I’ll really miss football,” Greenwald said.  “I love football, I love the kids I play with and all the coaches, and it’s going to be sad when it’s all over.”

Algonquin received the ball at their own 40 yard line with about one minute until half, still down 7-0.  Senior captain and wide receiver Nick Alessi caught a ball at the sidelines to give the T-Hawks a first down.  An unsportsmanlike conduct call against Westborough brought the T-Hawks into the red zone with eight seconds to go.

Greenwald scrambled, running out of bounds with just 1.4 seconds left in the half.  On the next play, Greenwald found senior captain and tight end Derek Blanchard in the end zone to make it 7-6 Westborough.  Algonquin went for two and Greenwald dove into the end zone to give Algonquin an 8-7 lead at halftime.

“I thought we used our timeouts pretty wisely in the 2nd quarter,” head coach Taylor Allen said.  “I think we gave ourselves a chance to go down the field and score before halftime. But that score really gave us the momentum we needed to continue to be successful offensively.  I’m proud of the way the offense stuck together all day.”

This was not Blanchard’s only big moment in the game.  He also succeeded as a run blocker on offense and covered Van Nest on defense.

“I feel that the role that was most effective for me today was my run blocking,” Blanchard said.  “We had Rio as a running back, really the whole offensive line stepped it up in the 2nd half, so I feel I made some blocks to contribute to that.”

The defense was strong throughout the second half too.  After Algonquin lost a fumble near their own end zone, senior defensive lineman John Fontecchio led the defense in stopping Westborough four times in a row to force a turnover on downs and give the offense the ball on their own 1 yard line.  This was the closest Westborough came to scoring in the second half, as the defense only got better from here.

The team was ecstatic to take the Thanksgiving Day trophy home for the first time since 2016.

“[Taking the trophy home] feels so great,” Ferguson said.  “I’ve been a part of two seasons where we’ve lost and it just hurts so bad, but this year was different and we were able to send the seniors off on a good note.”