Redesign Massachusetts flag to not honor brutality towards natives

New design will be proposed in December 2020, but change is necessary 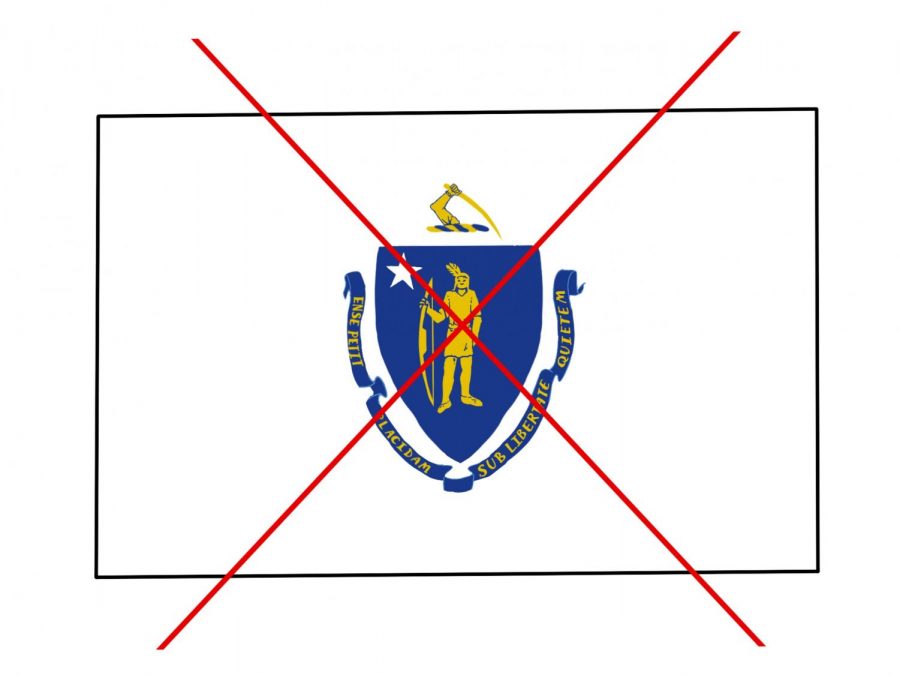 Graphics Coordinator Sharada Vishwanath argues that the Massachusetts state flag must be changed because it represents the terror settlers brought to the natives in the states colonial years.

Massachusetts’ history can be marked by the warfare, forced conversion, exposure to deadly diseases and oppression that resulted in the death of 99 percent of Native Americans who lived here. Currently, our state flag commemorates these acts of cruelty.

The flag currently features a blue shield on a white background. The middle of the shield depicts a Native American,with his arrow pointing downwards, a signal of defeat or surrender. A Latin motto surrounds the shield that can roughly be translated as “By the Sword We Seek Peace, But Peace Only Under Liberty.” As aggressive as the motto may be, it’s certainly a step up from the original seal in 1629 which had “Come Over and Help Us,” coming out of the Native’s mouth. The Native American is a Wampanoag leader who signed a peace treaty of 1621. Yet in perhaps the greatest source of controversy, an arm brandishing a sword looms over the Native in an unmistakable gesture of power, undermining the so-called peace initiated by the treaty that the flag is supposed to represent.

The arm is that of Miles Standish, an early colonial. Although Miles Standish is known for his courage and heroism in allegedly initiating peace between the colonies and tribes, his grotesque techniques used to exterminate the Natives should not be overlooked, and certainly not be commemorated on a state flag.

Some may argue that the 237 year old flag is a symbol of Massachusetts history, and its original design goals were to honor the past. However, considering the circumstances to which the flag alludes, the past may not be worth honoring.

In addition to being adamant about sticking to the historicity of the current flag, others argue that changing the flag wouldn’t be worth the cost. However, the cost of replacement is trivial in the grand scheme of government expenditure, and the opportunity to explicitly address the cruelty of loss of life, land, heritage and culture faced by Native Americans, should not be attached to a price.

The controversy surrounding the state flag has resulted in a pending bill for a redesign which has been in the process of passing for the past 34 years, getting caught up at the legislative level. Recently however, steps have been taken to create a commission to look into a possible redesign of the flag. Although the bill has not yet passed, this commission has been created and consists of five members (out of the 15 total) who are of direct descent of tribes, thereby ensuring that the Native American point of view is accounted for. Ideas for the redesign involve replacing the sword with a tree, symbolizing peace or equity. According to the bill (Resolve S.187), the details of the new design will be proposed by the committee no later than Dec. 2, 2020, after which concrete steps will hopefully be taken to actually change the flag.

A flag is supposed to be representative of the people who live there, but as it is now, the Massachusetts state flag represents oppression, subjugation and a one-sided view of history. The Massachusetts state flag needs to be redesigned, for it serves as nothing but a reminder of the genocidal relationship between the early colonies and tribes. A flag should honor history but not in a way that commemorates violence or brutality.