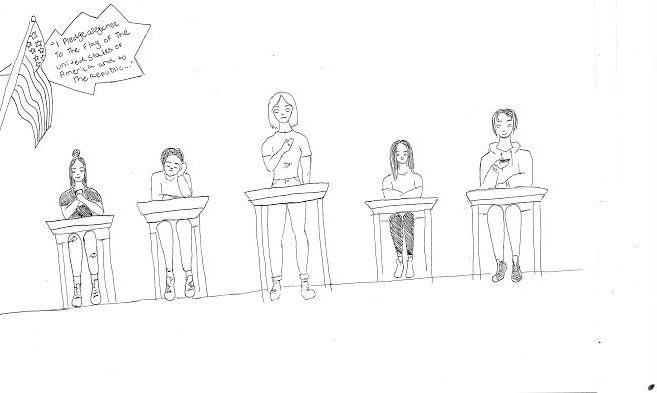 Opinion Editor Aaliyah Yan interviewed students and faculty to find out why they did or didn't say the pledge in the morning.

I’m not normally one to pay attention during morning announcements (treacherous I know), but one of the biggest things I do notice is the lack of participation during the pledge of allegiance, myself included. In all three of my years in Algonquin, none of my first-period classes have ever said the pledge in the morning.

Though some may not say it for their own personal reasons, the majority seems to not say it due to peer pressure. In a silent classroom, it can be awkward to be the only one saying the pledge.

This stands true for junior Olivia Ansaldi, who feels pressured by the quiet class.

“I sometimes say it to myself, but not aloud because I don’t want people to judge me especially when no one else is saying it” Ansaldi said.

After asking a few other people about why they no longer said the pledge, many like sophomore Justin Wang agreed that the classroom environment determined whether or not they would say the pledge.

One question that came to mind was why did we say the pledge all throughout elementary school and middle school, but stopped when we got to high school?

Wang believes a possible reason for the sudden cessation of people saying the pledge is because it became less enforced.
“I think high schoolers feel more independent of typical customs like in elementary schools and middle schools,” Wang said. “The teachers enforced the pledge more in middle school because they were more of a source of authority than in high school.”

Senior Meredith Lapidas offers another potential reason for why some may not say the pledge.

However, there are some that consistently say the pledge every morning, such as science teacher Lori Mott..

“I think the pledge is a time to pause and reflect on the freedoms that I have,” Mott said. “I don’t pledge the flag every day because I think our country is perfect, I pledge it because I respect the people who have gotten us to the point where we have a flag and can pledge. When you grow up in a time where you see sacrifices, you appreciate the flag a little bit more”

As for me, I would agree with the majority of the student body that the reason I don’t say the pledge is because no one else does. My silence has little to do with my political position or way I feel about our country. In fact, I feel as though my indifference to our country also has to do with why I don’t pledge every morning. I’m simply not patriotic enough to go out of my way to fill up a silent classroom.

The older I get, the more aware I became of the words within the pledge, and the more I realize how they could potentially be controversial. Instead I think when saying the pledge, we should focus less on the words and more on what you believe it stands for.