REVIEW: Remy gives Red Sox Nation a voice in ‘If These Walls Could Talk’ 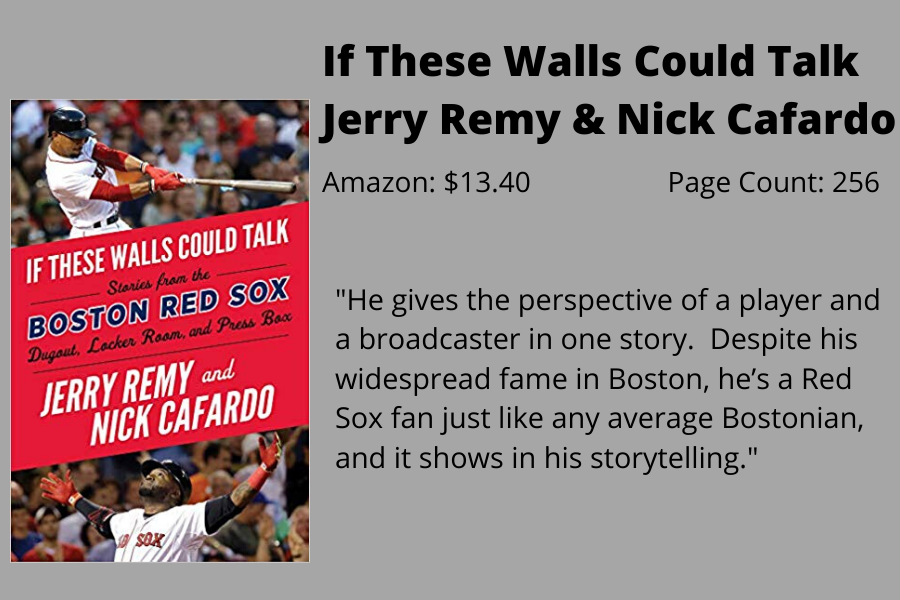 Staff Writer Andrew Roberts writes that "If These Walls Could Talk" by former Red Sox second basemen and broadcaster Jerry Remy gives readers a taste of what it is like to be a member of the Red Sox organization.

“If These Walls Could Talk” was written by Red Sox broadcaster Jerry Remy with help from  Boston Globe reporter Nick Cafardo. It gives an interesting perspective on Remy’s career and tells the story of Boston baseball’s last 50 years.

In this book, Remy describes the origins of his playing career, his adjustment to broadcasting and his bouts with cancer, depression and family issues.  He is very humble, praising coaches, broadcast partners and fellow Red Sox alumni for shaping him up to be the Boston legend he is today. Despite the adversity he faced on the field and in his personal life, he’s continued to stay close to the team and has been part of Red Sox broadcasts for 30 years.

Remy uses a conversational style throughout the book, as if he was on the air; however, he talks about memorable moments in his life and in Red Sox history instead of commenting on a game.  This is very effective as it engages readers throughout the book. He does go on some lengthy side tangents, but he knows how to tell these stories. He gives the perspective of a player and a broadcaster in one story.  Despite his widespread fame in Boston, he’s a Red Sox fan just like any average Bostonian, and it shows in his storytelling.

If you’re a baseball fan (especially a Red Sox fan) and you like hearing interesting stories about people’s lives, you should definitely read this book.  The parts about his own life and the stories he tells about his time playing baseball can even appeal to people who barely watch baseball at all.