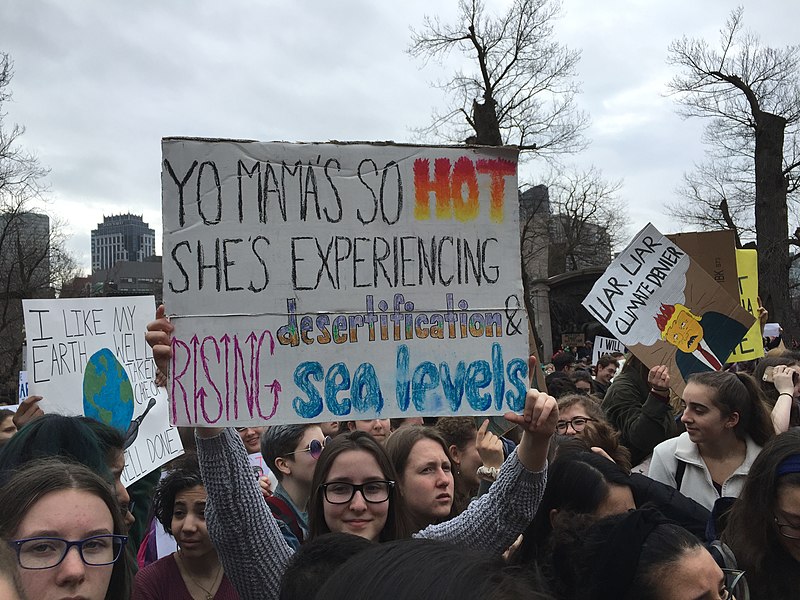 A protester holds up her sign at the Climate Strike in Boston on Sept. 20. Staff writer Shakila Sivarajan writes that teenagers have to step up in order to make sure that the proper actions are taken by adults.

As a highly rated school, that commits to a supportive environment and fosters responsibility, should Algonquin students support the schools that have allowed their students to skip school to join the climate change demonstrations? Should Algonquin students take it as our responsibility to combat climate change unanimously? On Friday, Sept. 20, there was a massive youth-led demonstration in the streets of Manhattan, NY and many other cities around the world including our own city, Boston. High-pitched chants, angry speeches by kids and signs delivering stern messages to combat climate change were all directed to the politicians. On that day, thousands of high schoolers across the nation skipped school to attend marches. Had I been excused, I would have joined the march in Boston. On Monday, Sept. 23, the demonstrations blocked the intersections in Washington DC to keep the pressure on as the United Nations met as an annual meeting in NY for Climate Action Summit. It is a launch of a new era in climate change!

Climate change has reverberated across the globe and now it has a new face, making headlines in media, dedicating an entire September Time magazine issue and inspiring high schoolers and others to take initiative. The latest driving force of the young generation is pigtailed, blunt spoken Swedish teenager Greta Thunberg who is a breath of fresh air to the issue.

Thunberg skipped school on Fridays in 2018 to spend days in front of Swedish parliament, calling for strong action  against climate change. She demanded the Swedish government to reduce carbon emissions in accordance with the Paris Agreement, an international treaty aimed to reduce the emission of gases that contribute to global warming. Thunberg has injected a new kind of energy and inspiration to thousands of middle and high schoolers, including me!

According to a recent The Washington Post’s article, “Most American teens are frightened by climate change, poll finds, and about 1 in 4 are taking action”, 57 percent of teenagers are frightened by climate change, 54 percent of them are motivated and 52 percent are angry, while 43 percent feel helpless and 42 percent are guilty. These feelings are channeled into activism and into urging and demanding leaders to act immediately on climate change. “We won’t have the chance to make the changes we need to, if we don’t have the courage to fight,” said Dulce Belen Ceballos Arias, 18 year old from Redwood City, Calif.. “Who’s future? Our future,” shouted students from Montgomery Blair High School in Silver Spring, MD.

Sadly, I am one of many high schoolers who are afraid, angry and helpless on a matter that is not even supposed to be a teenage problem. I feel that one big problem has been added to my list. Sometimes, I feel that united, we students can really make it a law to ban the plastics, stop manufacturing gas fuelled vehicles, replace trees for every tree cut, etc. Other times, I feel that we cannot do anything until we get our politicians to believe in science. It’s very sad that in this era when there are self-driving cars and high-tech classrooms, many people aren’t even believing in climate change. It feels like the earth is falling apart. Many Algonquin students, like my peers, agree that the issue is critical, angry that it has fallen on our shoulders, but are proud of the youth who are in the forefront. I think it’s time that our school makes climate change one whole unit of any of the core science subjects and have the students do a project. School can also give incentives to the students who convince adults to take advantage of the Mass Save program which makes their houses energy efficient. Algonquin too can compare their energy use with other schools nationally.  Maybe then, I think, we might have hope.