EDITORIAL: Fight for your rights

Continue working for change after the strike ends, vote when you can 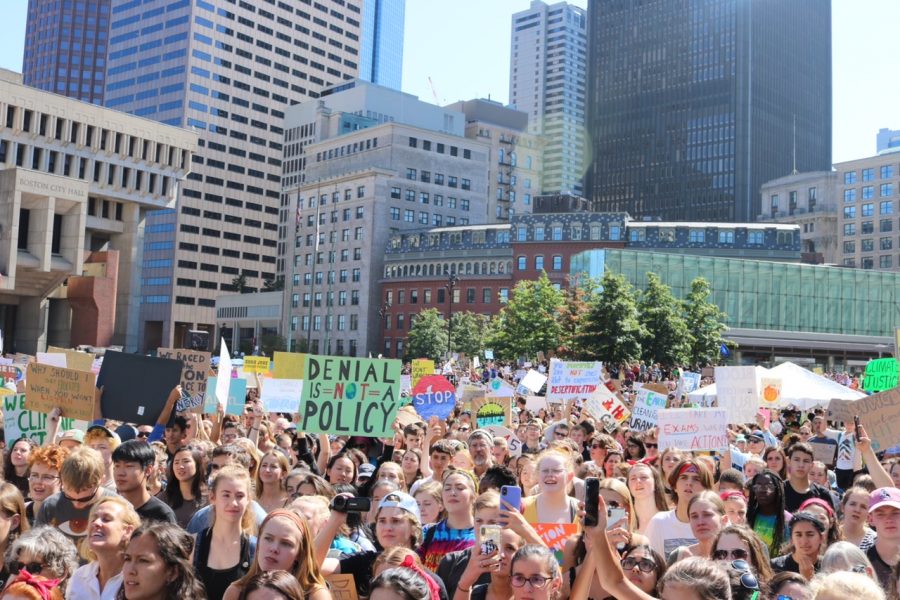 Officials estimate that about 7,000 youth skipped school and attended the Boston Climate Strike on Sept. 20.

Activism. It’s everywhere. We’re supposed to go to these marches and fight for our rights. Right now, we want a habitable environment, but what are we doing besides attending these marches? Are we educating ourselves on these issues? Do we go lobby, show support for a bill or cause, on a continuous basis and not just attend the mass protest? Do we show that we actually care about these causes and are not just sheep following the flock? While many of us may not be able to vote, our actions can speak volumes to those that can, but marching is only the first step.

With the multiple movements that have popped up in recent years, there has never been a better time for students like us to educate ourselves on these issues. Take climate change for example. According to NASA, human activity is the cause for the rapid, unprecedented rate at which the average temperature is rising (1.62 degrees Fahrenheit since the late 1800s). This phenomena has lead to a multitude of problems including ocean warming (a .4 degree Fahrenheit increase since 1969 according to NASA), and acidification of oceans, (which according to National Oceanic and  Atmospheric Administration a 30 percent acid increase in the past 200 years), and decreased snow and higher rates of extreme weather events in the United States. Even if we were to stop emitting greenhouse gases today, NASA scientists say that the temperature will still climb, yet many of us are unaware of this fact.

As young people, we have a responsibility to not only educate others, but also to vote once we turn 18. According to US census results, in the 2016 presidential election only 46.1 percent of eligible 18-29 year olds voted, making it the lowest turnout of any age range.  This is even more dismal when compared to the highest turnout, 70.9 percent of voters 65 and older.

Many of us will be able to vote in the next couple of years, yet the trends show that we won’t exercise this democratic right. It is one thing to advocate for a change; it is another to be an active part of the change. One of the easiest ways we can do this is to vote for representatives that care about the same issues as us. In the 2020 election, Democratic and Republican nominees have all proposed their own plans to combat climate change. Now, it is our turn to learn about their stances and plans and say what we want to happen. But, this must happen through our votes. They have all heard the cries, now they need to see the action behind it.

Many people are going to the protests and educating others, but there is still a select group of people that go to the protest for the Instagram picture. While this act  to posting on social media shares the larger problem, those posters also need to be informed about the problem. They essentially only know the bare minimum of what is happening. That is empty activism, fighting for a cause that you don’t know enough or care enough about to create actual change.

Empty activism is not helpful. Many of those in the climate marches lead wasteful lifestyles, yet they don’t make the changes needed to promote or fix their cause. Anti-gun protesters still shop at Walmart and don’t lobby for the bills restricting guns. Thousands of protesters need to turn into thousands of informed voters or people that look for solutions to the problems that they care about. The only way to do that is to actually care about the issues that we tell others we do.

This unsigned editorial reflects the views of The Harbinger Editorial Board.