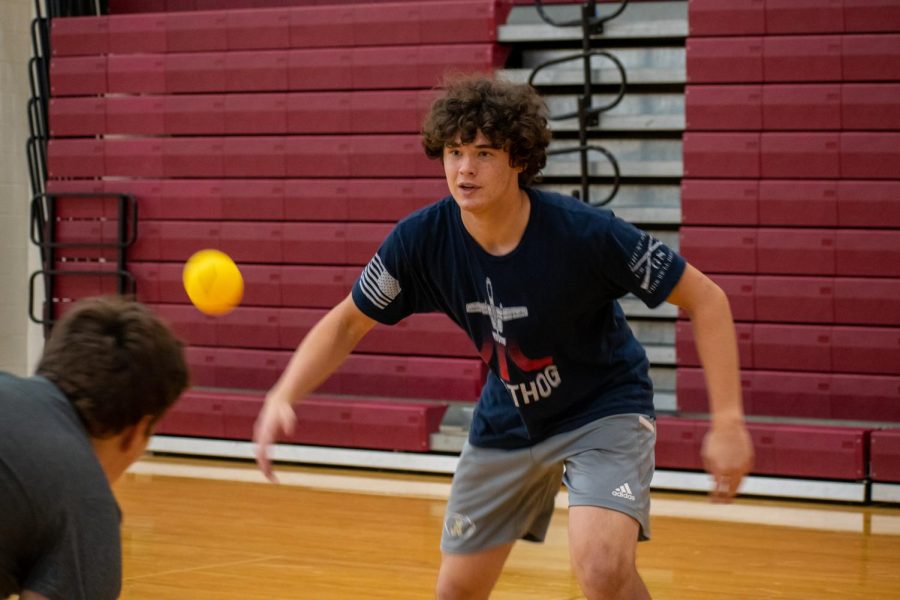 With his eyes focused on the ball, sophomore Aiden Goss looks to win the point for his team.

The new Spikeball club provides a laid back time for students staying after school for sports or other activities. Seniors Riley Greenwald, Ben Macaulay and Ben Zschokke started the club this school year.

Spikeball is a game played with a roundnet and two teams. The teams line up across from each other. One team serves the ball by hitting the ball into the net and towards the other team. Throughout the game, the players do this, and their ultimate goal is to hit it in a way so that the opposing team cannot return it.

According to Zshokke, the club, which meets Thursdays at 2 p.m., gives students a chance to meet new friends and to interact with one another.

“It is a fun way for physical activity after school and lots of people of all grades come,” Zschokke said. “It’s easy to make friends.”

Macaualay said they started the club since it was such a popular sport in the school.

Physical education teacher and club adviser Andrew Kinney believes it is a great opportunity for students who play sports to have some fun before their practices.

“Kids usually don’t have stuff to do from 2 to 2:30,” Kinney said. “Most [club members] are people who play sports, so they may as well come down and play some Spikeball. There are usually five to six nets set up with 20 to 24 kids and the games go quick, so everyone gets in at some point.”

Club member and senior Michael Rogers thinks that the club has a welcoming nature.

“It’s laid back and easy to get the hang of in a friendly environment,” said Rogers. “Everyone does it in gym class senior year which is a good way to practice and stay active.”