Ruffo, Moll use sisterly bond to succeed on the field

Communication has led them to success for five years 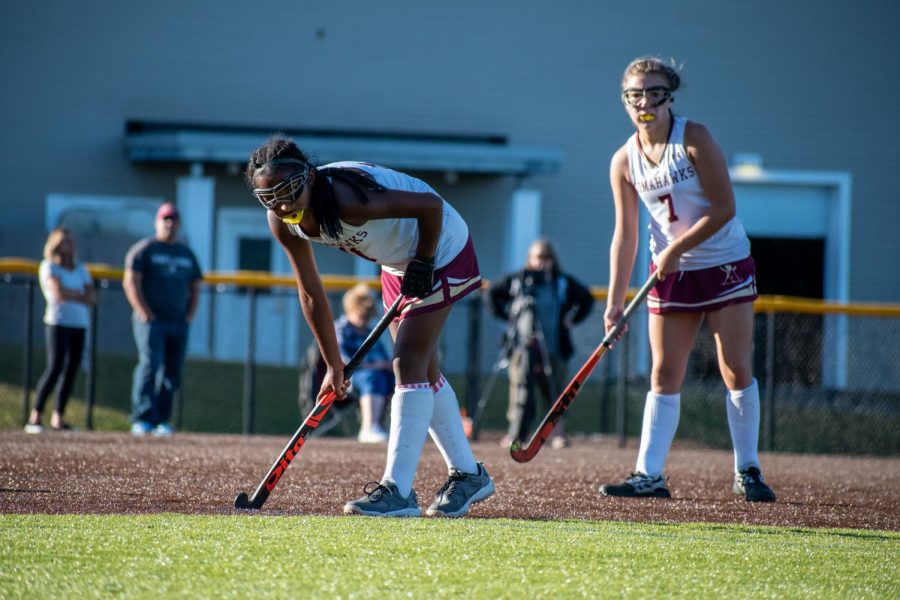 Junior Day Ruffo [left] and senior Alex Moll [right] patiently wait for the ball against Groton-Dunstable on Sept. 25. The team won this game 6-0 and has a current record of 11-0-2. Ruffo and Molls' bond as sisters has helped them contribute to the team's success.

For five years, junior Day Ruffo and senior Alex Moll have flourished on the field hockey field together as sisters. The girls’ field hockey team is currently second in the Mid-Wach A league with a league record of 3-0-2.

“Because we’re sisters, Alex and I flow really well with each other,” Ruffo said.

Ruffo and Moll both made the varsity field hockey team as freshmen and have contributed to the team’s recent success. In 2017, when Ruffo was a freshman and Moll was a sophomore, the team won the Central Massachusetts championship title. In 2018, they finished with a strong 12-7-2 record. This season, Ruffo’s offensive power and Moll playing midfield has contributed to the team’s current undefeated record (11-0-2).

“I’ve been playing a lot of the midfield position so I can hit the ball up to Day and she and I can work together in the circle to score,” Moll said.

According to Ruffo, communication is also a big part of the sisters’ success.

“We are always able to pass the ball to each other and we communicate really well on the field,” Ruffo said.

Both sisters have been on the same team since Ruffo was in sixth grade and Moll was in seventh. They enjoy playing together and believe it has increased their bond with each other.

Teammates, coaches and the girls’ parents are supportive of the sister duo on and off the field.

“I love that they’re able to share their success on the team and I’m glad that they share it together,” junior Sophia Cavallo said. “They bring a lot of personality to the team.”

According to Moll, their parents love to see their success both individually and as a team.

“My parents are definitely really proud of both of us and honestly, just want the best for us and to see us succeed,” Moll said.

As for the rest of the season, Ruffo hopes that the sister’s chemistry will benefit the team even more.

“This season should be good and Alex and I are both super excited,” Ruffo said. “The team has been looking pretty good so far.”

As a senior, Moll feels bittersweet because it is her last year playing field hockey in high school.

“I’m really excited for the rest of the season,” Moll said. “I’m sad that it’s my last year playing on the team, but I couldn’t have asked for a better group of girls to play field hockey with.”