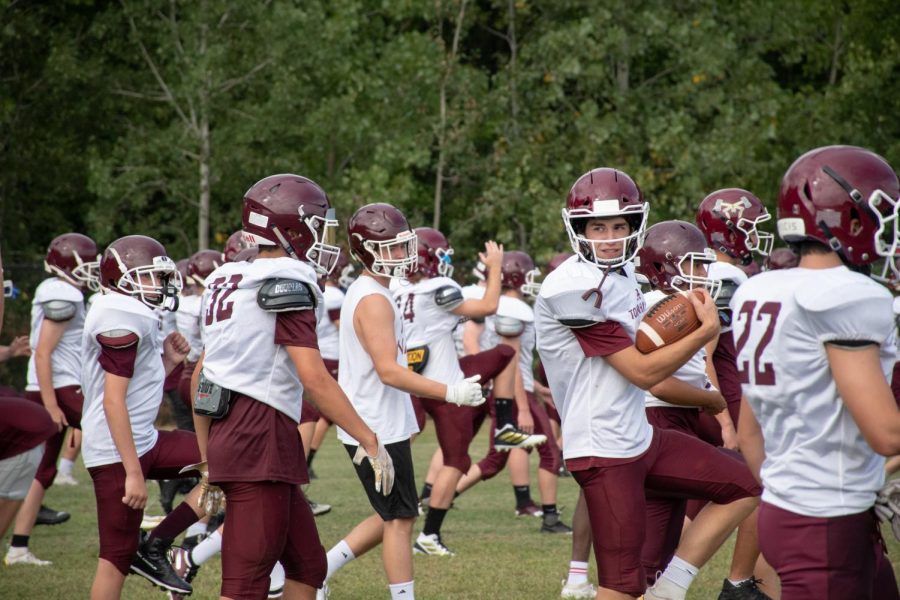 Senior Riley Greenwald looks on during a football practice on August 24. Friday night football games in September have been to Saturdays because of the EEE outbreak.

Northborough and Southborough have been identified at a critical risk level for Eastern Equine Encephalitis virus (EEE), prompting measures by the school district to protect students’ safety and impacting the fall sports schedule.

EEE is a rare, potentially fatal disease transmitted by mosquitos for which there is no treatment for humans. Critical risk is the highest of five risk categories established by the Executive Office of Health and Human Services.

As of Aug. 19, the school district, adhering to the recommendations of the Massachusetts Department of Public Health (DPH), Center for Disease Control (CDC), Northborough Board of Health, Southborough Board of Health and the press release from Southborough Public Health and Safety Department, has postponed or rescheduled all activities between 6 p.m. and 6 a.m, as these are the hours during which mosquitos are most active. For Algonquin students, this means a change in the game schedule for fall sports.

“We felt that obviously the safety of our student athletes is first and foremost,” Athletic Director Michael Mocerino said.  “Because of the threat level and because of the proactive approach we’re going to take, we decided to change the fall schedule for the month of September.”

This has impacted the football program, whose home games were moved from Friday nights to Saturday afternoons and the boys’ and girls’ soccer program, whose double headers were moved to either earlier in the day or switched to an away site.

According to Mocerino, Algonquin has taken an extra half hour approach, with all sports concluding a half hour before dusk. The change in sport schedule is so far only in place for September, but the situation will be reassessed come October.

“We’ve agreed that we’ll come back in October to reevaluate it and to continuously make changes if needed because again safety is our first priority,” Mocerino said.

Though the timing for activities will be revaluated then, District Wellness Coordinator Mary Ellen Duggan is doubtful that any changes will occur right at the start of the month.

“I’m guessing until the first hard frost it will stay that it will be dusk to dawn,” Duggan said.

Football player and junior Troy Montgomery is bothered by this shift to Saturday games.

“I’m annoyed because football games are usually on Fridays, so I like to spend my Saturdays relaxing after the game, but now I can’t do that,” Montgomery said.

Sophomore Carlee Ballard is likewise annoyed with the new timing of soccer games.

“I’m pretty upset because it’s a lot more exciting to play under the lights during the fall season,” Ballard said. “Evening games get everyone pumped up and it’s easier for fans to come and support the team at later games rather than right after school.”

Junior Michael McEvoy, however, thinks giving up parts of Saturdays is an acceptable trade off to avoid extra contact with mosquitos during football games.

“I’m not too upset about it because I’d rather be safe than sorry,” McEvoy said.

While the schedule for cross country has not changed, the sport has still felt the impact of the EEE threat.

“We have to put on bug spray and wear long sleeves before we run in the woods,” senior Joe Kearney said. “It’s also mentally affecting us because I’ve been pretty rattled having to worry about mosquitos in the woods when I just want to focus on running.”

On Sept. 12, all outdoor areas at Algonquin were treated with Zenivex E4 ULV, a synthetic pyrethroid, to control adult mosquitos and minimize the risk of EEE. Furthermore, the school district is encouraging parents to have their children wear long sleeves, long pants and socks and apply mosquito repellant to their child’s clothing in light of news that a Northborough resident has been diagnosed with the virus.

According to Duggan, the district is focused on informing the community about the virus.

“I think just knowing what to do to protect yourself and what’s going on [is the best way to stay safe],” Duggan said.

In an email sent to parents and guardians in the district on Sept. 10, Duggan urged families to follow the precautions recommended by the DPH at home. The DPH suggests families remove standing water around their homes, cover exposed skin when possible and use mosquito repellent that contains DEET (N, N-Diethyl-meta-toluamide) permethrin or certain other chemicals.