Tontodonato resigns after working at Algonquin for 17 years 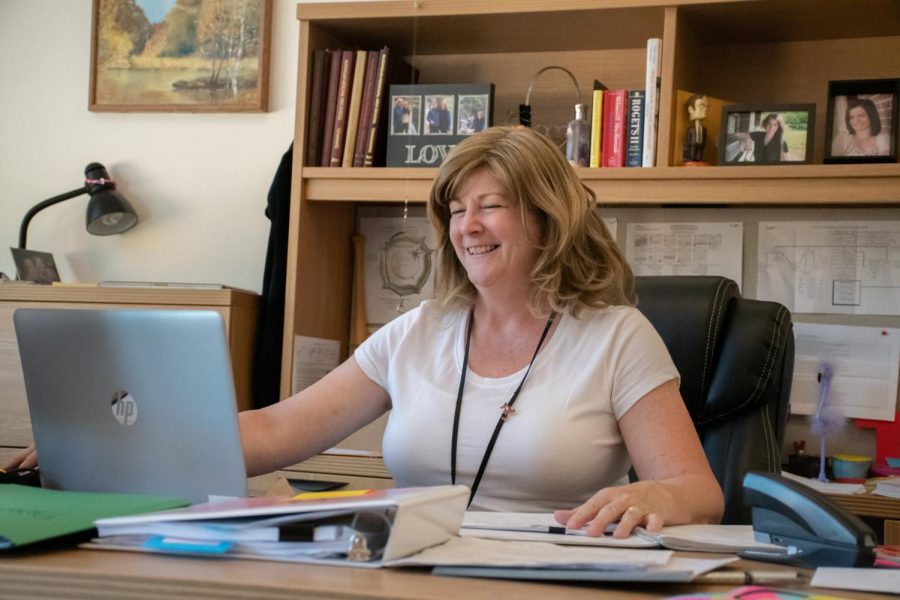 Assistant Principal Michele Tontodonato works at her computer as the school year wraps up. She will be assuming a position as Director of Finance and Operations at a different school on July 1.

Assistant Principal Michele Tontodonato left her position on June 21 and will be taking up a new role as Director of Finance and Operations at a different school, the name of which she has not announced.

Tontodonato worked as a business teacher at Algonquin for 11 years, becoming department head during that time, and then spent the next six years as assistant principal. She is excited to be able to use her background in both these fields when she starts her new position.

“I think my background as an educator will help me to help the school I’m working with to develop their budget and financing and everything else like that,” Tontodanato said.

“My commute is an hour each way,” Tontodonato said. “It’s been that way for 17 years. My commute starting July 1 will be 10 minutes. It’s secondary, but it’s a big part.”

While she was a business teacher, Tontodonato enjoyed being able to introduce students to business before college.

“The business program here gave students that opportunity to try [business] out and decide if they liked it or not,” Tontodonato said. “…The kids who came up and said ‘This is what I’m going [to college] for,’ I loved that.”

Tontodonato notes that after becoming an assistant principal, her relationship with students changed, but she hopes to have left her mark nonetheless.

“I want to leave knowing I had that positive impact on students,” Tontodonato said.

Though she is looking forward to beginning her new job, Tontodonato is thankful for her time at Algonquin.

“This is my second family,” Tontodonato said. “…[Working at Algonquin] was my first step into education, and I’ve loved it here. It’s going to be a big change, and I’ll miss everyone.”

In an email on June 25, Principal Dr. Sara Pragluski Walsh said she was unable to discuss whether Tontodonato’s position would be filled as she has not met with Superintendent Martineau about the matter yet.