Same schedule for next year due to STEP challenges 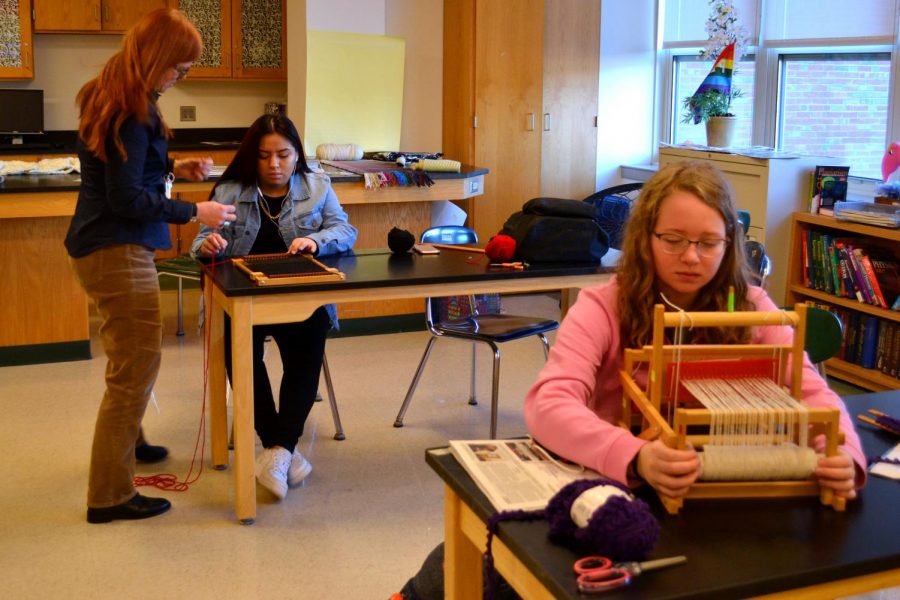 Junior Kayly Somers learns to weave in a STEP block offered during a pilot week. No STEP blocks will be added next year due to planning and budgetary restraints.

Despite efforts to implement a new schedule for the 2019-2020 school year, Algonquin will continue with its current bell schedule due to the additional work needed in planning the Student/Teacher Enrichment Period (STEP) blocks that would come with a new schedule.

After piloting two, week-long trial schedules earlier this year, a second scheduling committee, separate from the one that designed the pilot schedules, was formed. This committee evaluated the logistics of the STEP blocks in Pilot 2. According to Principal Dr. Sara Pragluski Walsh, Pilot 2 had the most support after its trial phase.

Pilot 2 had two STEP blocks a week, resulting in 80 steps a year. This aspect posed a challenge for the scheduling committee members, as they wanted each STEP block to be meaningful.

“[The Pilot 2 committee doesn’t] really have a plan yet for those 80 STEPs, so we need to spend this coming year kind of figuring out what exactly we’re doing 80 times a year,” social studies teacher and Pilot 2 committee member Gina Johnston said. “The schedule itself works; it’s just those two STEP blocks a week.”

“The purpose of a STEP block was to have innovative and interactive time with the teachers and the students, so that students could pursue interests outside of their own classes,” Perreault said.

“I received some pivotal student feedback from a senior who said it was really hard to understand the impact of switching to Pilot 2 because we never got to live… the schedule [for an extended period of time],” Walsh said.

Though the schedule will remain the same next year, Walsh says there needs to be a third scheduling committee sometime in the future to make a schedule change a reality.

Though some, such as Perrault, are disappointed the schedule will remain the same next year, Walsh believes that taking the time to fully prepare for each part of a new schedule is important.