THE ALGONQUIN HARBINGER • May 31, 2019 • https://arhsharbinger.com/18747/opinion/democracy-is-essential-more-than-just-voting/ 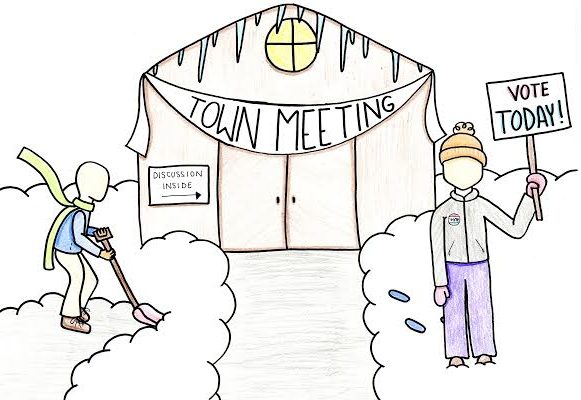 Staff writer Carter Brannon writes that democracy is more than voting and that teens should get involved even if they cannot vote.

We are fortunate to live in communities that have maintained their status as New England Towns, operating under the traditional direct democracy of an open Town Meeting. But the good of democracy is more than just being able to vote on taxes and bylaws.

Democracy is rule by the people. In order for a democracy to work correctly, the people must make the effort to rule. There are three ways that the people rule in our democracy: voting, speaking and acting. Although there are restrictions on who can do these things, as participation is at times restricted to adult registered voters, everyone can and should play a role in the various processes of local democracy.

Voting is the most distinct “democratic” process. We vote for officials, representatives and policies during elections, as well as on different articles at Town Meetings. The idea of voting is to pass what the majority of people want but it does not succeed in that when most people do not vote.

Voting is very important, especially at the local level. It is shocking when our town elections have a turnout higher than 10 percent. This lack of participation means the elections do not reflect enough people’s desires. Town Meetings are even less attended, perhaps getting a couple hundred people in Northborough, despite being a town of 15,000. Going to and voting at these elections can make you an influential community member. At Town Meeting, you and a couple of friends can make up more than one percent of the voters. Therefore, a small number of votes have a large impact on the results.

Speaking is another important part of democracy. Policies ought to be made with the best ideas possible, as well as having as much of a consensus as possible. Questions, ideas and input are very important to forming policy. Every idea, good or bad, had to be thought up by someone. Ideas can’t be turned into policy unless someone says something about the ideas.

One of the great things about Town Meeting is that voters are allowed to ask questions and make comments about the articles being voted on. In turn it allows for debate and discussion about the articles before they are voted on. This is a much better way of direct democracy than ballot referendums. In this alternative, voters just check off unclear propositions without any organized discussion about what is actually being voted on and what the impact of these proposals are. For example, following the 2016 legalization of cannabis for recreational purposes, there was confusion over what local governments could and couldn’t do to restrict recreational and medical marijuana, according to the Metrowest Daily News article “Northborough, Bellingham now told they cannot prohibit medical marijuana dispensaries.” The confusion and mistakes made could have been clarified and avoided if the discussions happened before the law was voted on, not after.

Town meeting is not the only place for discussion and debate. It’s actually hard to change the proposals at Town Meeting itself. Several meetings of committees and public input are held for months before the town meeting to discuss the problems that the town meeting articles attempt to solve. Non-voting teenagers who are prohibited from speaking at Town Meeting often can give their input at these meetings. More attendance at these meetings and giving input would make our communities much better, and ideally, settle the concerns that can’t be adequately addressed at town meeting.

The last part of democracy is action. If you think that sidewalks should be shoveled, hungry people should be fed or that a parade should happen on your favorite holiday, you could petition to the government or the town to do those things, or you could speak out to everyone asking them for support. Those methods could very well work, but I think that the most power that an individual has in a democracy is with their actions. You can pull out a shovel and clear the sidewalks in your neighborhood, you can cook food for someone or you can learn to play a trumpet and march down the street on International Dog Biscuit Appreciation Day. Perhaps we could lead others by example, or maybe we would just do something ourselves that otherwise would not get done. Either way, we have that power to impact the world.

Democracy is more than just voting