THE ALGONQUIN HARBINGER • May 25, 2019 • https://arhsharbinger.com/18650/ae/review-annual-improv-show-brings-humor-to-algonquin/ 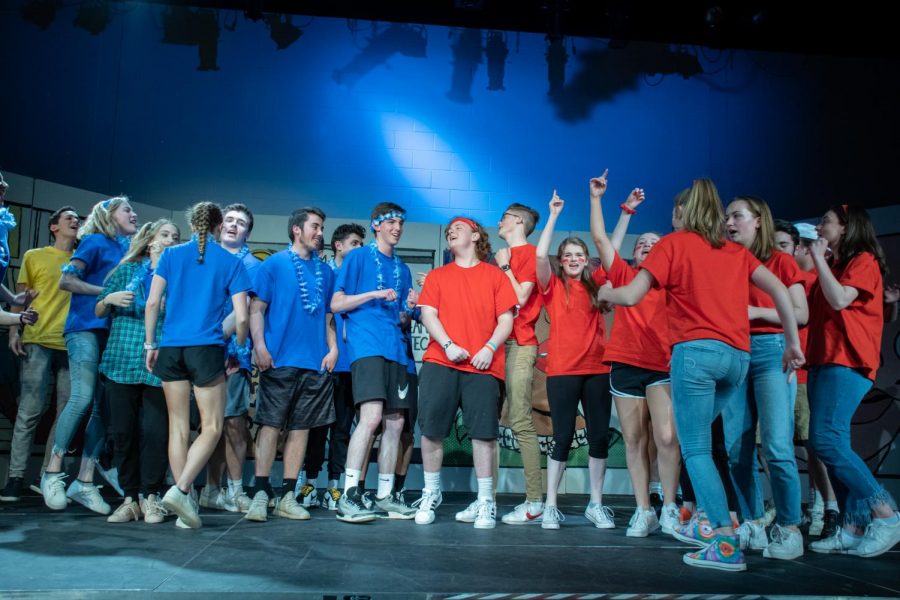 This year’s Needs Improvment” cast put on a humorous show, Seasonal Allergies, by capturing the essence of Algonquin through their skits on May 16 and 17.

We arrived at the show more than 45 minutes early, and there was already a line eagerly waiting to enter the Black Box Theater.

Comically, each year the group chooses an underlying theme for their two opposing teams of cast members. This year the cast  chose to incorporate the seasonal struggle of allergies, through Team Zyrtec and Team Allegra.

The cast entered the Black Box with enthusiasm, dancing back and forth across the stage, hyping up not only each other but the whole audience.

The opening skit was “Wild Wild West” in which two men inside a western bar did a blindfolded horseshoe toss, fighting over a woman. The most standout performance was junior Michael Cowdry’s interpretation of a sheriff. He wore oversized jeans and talked in a wacky country accent. The audience cracked up when he entered barreling down the aisle  and hollering.

The following skit was a scene dedicated to the common struggle of finding a prom date, yet everything went wrong. Junior Joe Greene began by ranting to his guidance counselor about his five promposals that all got denied. This resulted in Dr. Walsh, played by senior Annalise Loizeaux, assigning prom dates through a Canvas compatibility quiz. Everyone ends up hating their dates and resenting Greene. The most laugh-out-loud prom date pairing was played by senior twins Riley and Shea Garand, and the skit ended with the two slow dancing.

Despite being the longest scene of the night, there was never a dull moment in ”The Battle of the Boros.” The scene began with two freshmen from opposing towns colliding at freshman orientation and falling into a forbidden love. The two lovebirds were played by seniors Nick Redden (Northborough) and Jeanie Kirk (Southborough). This skit was the perfect twist on what we all felt entering Algonquin: the pressure of being cool, fitting in, and figuring out which boro is superior, established in the skit it’s definitely not Westborough.

The “Dear Mr. Hancin” skit was a musical parody of the play “Dear Evan Hansen”. The heartfelt song captured Mr. Hancin’s quirks and left the audience heartbroken over his upcoming retirement. Although the song’s lyrics were a perfect tribute to Mr. Hancin, we had trouble hearing every word and  wish the singers were able to project more.

After a brief intermission, the second act was the “Improv Smackdown,”  a series of improv games between the spirited teams, Allegra and Zyrtec. One game that stuck out was the musical improv game played on the first night. Senior Katherine Moffa and sophomore Miranda Slingluff battled out as two moms whose daughters are ex-best friends. They were able to think of and perform catchy songs right on the spot in front of a large audience, which takes a lot of talent.

The popular improv show lived up to the hype. The cast, teachers, and live house band involved in Needs Improvment produced a hilarious show. In fact, we don’t think they need much “improvment” at all.