THE ALGONQUIN HARBINGER • May 24, 2019 • https://arhsharbinger.com/18616/news/an-activist-in-northborough-tanikella-passes-plastic-polystyrene-bylaws/ 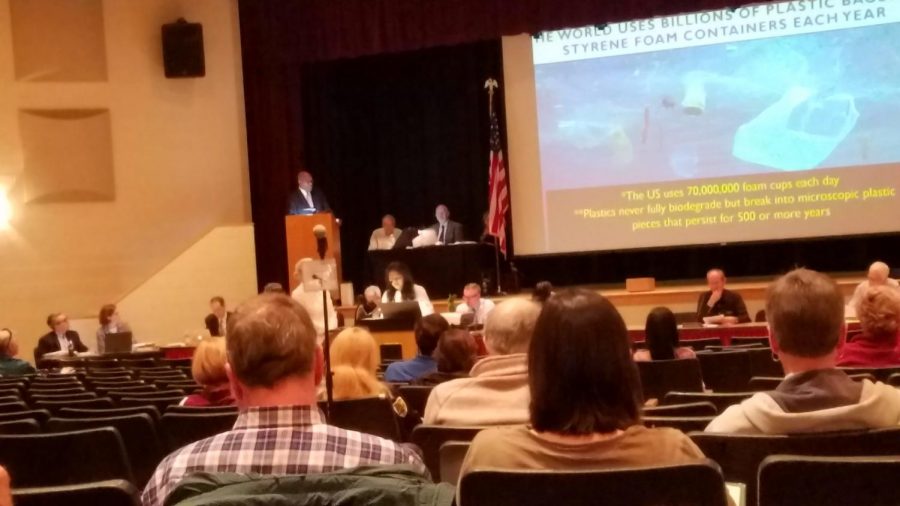 Sophomore Sravya Tanikella gives a presentation on plastic bags and polystyrene at the Northborough Annual Town Meeting on April 23. The bylaws she helped propose passed with overwhelming support.

Sophomore Sravya Tanikella, with the help of other members of the Interact Club, helped pass two new bylaws to reduce plastic bags and polystyrene in Northborough at the Annual Town Meeting on April 23.

At Town Meeting, Tanikella gave a slideshow presentation with Northborough resident Jeanne Cahill to explain the proposed bylaw and why it is needed.

“We’re not just talking about some mock trial or some mock debate that’s fake…” Tanikella said. “I feel like I understood that this was the real deal, and the emotion felt a lot more real.”

Effective January 1, 2020, retail stores in Northborough will no longer be allowed to issue plastic checkout bags (four mils thick or less), nor may businesses issue take out containers or drink cups made from expanded polystyrene.

Although Tankella is now dedicated to making a positive impact, she was not always passionate about the environment.

“There was definitely a shift from me not caring about the environment to now,” Tanikella said. “When I see a plastic bag, my heart aches.”

Tanikella credits her return to Northborough after living in India for four years as an eye-opening experience.

“I lived in India, and India is full of litter everywhere,” Tanikella said. “I’d see someone drop an empty chips bag on the ground, just drop it and move on with their lives… and that was common. I didn’t judge it. I was like,‘That’s okay. That’s life’. I was young, I didn’t get it.”

When Tanikella moved back to the United States after living in India, she noticed a change in people’s environmental consciousness, sparking her current activism.

“When I came back [to America], I saw there’s no pollution in the sky; you can see the blue sky,” Tanikella said. “In India, it was just grey all the time…The whole demographic change was a lot for me, and that’s probably what made me realize [the importance of the environment] the most.”

Tanikella notes people in Massachusetts seem to be more aware of problems than much of the rest of the world. Ninety-seven Massachusetts towns have banned plastic bags before Northborough.

Before Town Meeting, Tanikella had to go to Board of Selectmen’s meetings, gather signatures and write the bylaws, which she described as a “painful process.” She and members of the Interact Club contacted Northborough businesses to explain what was happening.

“We spent hours and days trying to reach out to everyone; we had flyers, and we tried to talk to them,” Tanikella said.

Smaller businesses tended to have more concerns about the proposal than larger ones.

“The retail stores up on on the hill at Northborough Crossing were fine; they were all good [with the proposed bylaws],” Tanikella said. “But a lot of local businesses were like, ‘You know, we’re just barely making it, and for us to not be able to use plastic or styrofoam would really just eliminate our cost savings and the way we’ve been operating for the last however many years.’ We [tried] to tell them this whole ‘use and throw’ culture, this whole taking something and using it for a little while and throwing it away, that needs to stop because it can’t go on forever.”

The plastic bag reduction bylaw was a contentious topic at Town Meeting. Bylaw Committee members and Northborough residents raised concerns about the usefulness of plastic bags, whether the materials are to blame for the problems or if the act of littering is, and the wording of the bylaw, especially the presence of a severability clause, which allows valid parts of the bylaw to remain in effect if some parts are found to be invalid.

“All of that opposition, all of that emotion builds up to the day of Town Meeting,” Tanikella said.

She noted that during her slideshow presentation she worried that the measure would be voted down.

“Someone could just stand up, make a good point and everyone votes in opposition,” Tanikella said. “Then we’d have to work through this whole one year process over again. I’m not scared of working; I’m just scared about this whole neverending cycle of people not understanding the impacts.”

Voters overwhelmingly supported the articles, with both articles clearly passing with the required two-thirds majority. Tanikella was very happy with the success.

“Town Meeting really showed me that everyone understood what was going on, everyone felt it, and they were willing to let our town go through change,” Tanikella said.

Despite her ultimate success, she was disappointed with the limits placed on her as a non-voting minor.

“I think in school we’re so encouraged to speak out for each other, speak up for ourselves, speak up for others, but once you get to the real world, I can’t speak up,” Tanikella said. “I’m the one who started up all of these petitions and all this, but I couldn’t propose it because I’m not a citizen. I had to propose it in someone else’s name. I did my own presentation, [but] I wasn’t allowed to answer any of the questions because I’m a minor, even though I knew the answer to all those questions.”

“There’s a lot of bright voices at Algonquin, and it’s a shame that they can’t speak,” Tanikella said. “It’s not that they don’t have the ability to, they’re not allowed to.”

Overall, Tanikella found her experience at Town Meeting to be informative and a good way to expose herself to the real world.

“You see the real world at Town Meeting,” Tanikella said. “It’s really an eye-opening experience. It’s interesting to see how much change can happen in a few hours, how much time and effort go in to keeping a town safe.”