THE ALGONQUIN HARBINGER • May 14, 2019 • https://arhsharbinger.com/18376/sports/boys-tennis-sweeps-tough-opponent-longmeadow/ 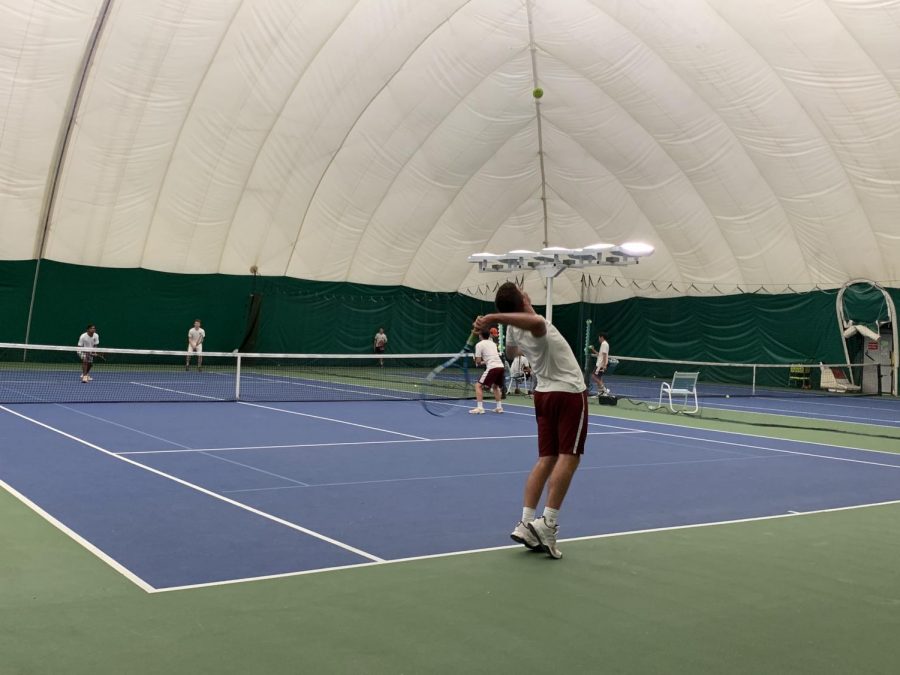 After a strong start to the season, boys’ tennis swept Longmeadow 5-0 in a tough match at Wayside Athletic Club on Tuesday, May 7.

“We have a lot of new talent this year,” senior captain Christian Jorgensen said. “We still are figuring out the lineup, but I think we’re off to a pretty good start.”

According to senior Andy Zhao, freshman Ethan Zhang is the future of the team. He fought a difficult third singles match which lasted over two hours.

Due to the length of his match, Zhang looked very fatigued, even lying on the ground in distress. In between sets, he looked dejected, but his teammates continually cheered him on, roaring with applause when he finally won 7-5, 2-6, 6-2.

“I’m kind of in a slump because I haven’t been practicing as much, but I’m getting out of it right now,” Zhang said. “If I was playing normally, no offense, but I would have smashed that kid.”

“I heard he was a hard opponent, and we were neck in neck, but I played my best and it paid off,” Farhat said.

According to Jorgenson, they are looking to play their best and make it to States as a team. Molhelcker believes the team has a lot of compatibility and have a good shot at the Districts title this season.

“When the end of the season comes, I think we will be a really unbeatable and unstoppable team heading into the playoffs,” Molhelcker said.

Coach Gerald Cushing is optimistic about the rest of the season.

“The wins will take care of themselves,” Cushing said. “We just want to keep on getting better throughout the season and if we do that we will have a very successful season.”