THE ALGONQUIN HARBINGER • May 7, 2019 • https://arhsharbinger.com/18183/sports/girls-rugby-comes-together-to-beat-weymouth/ 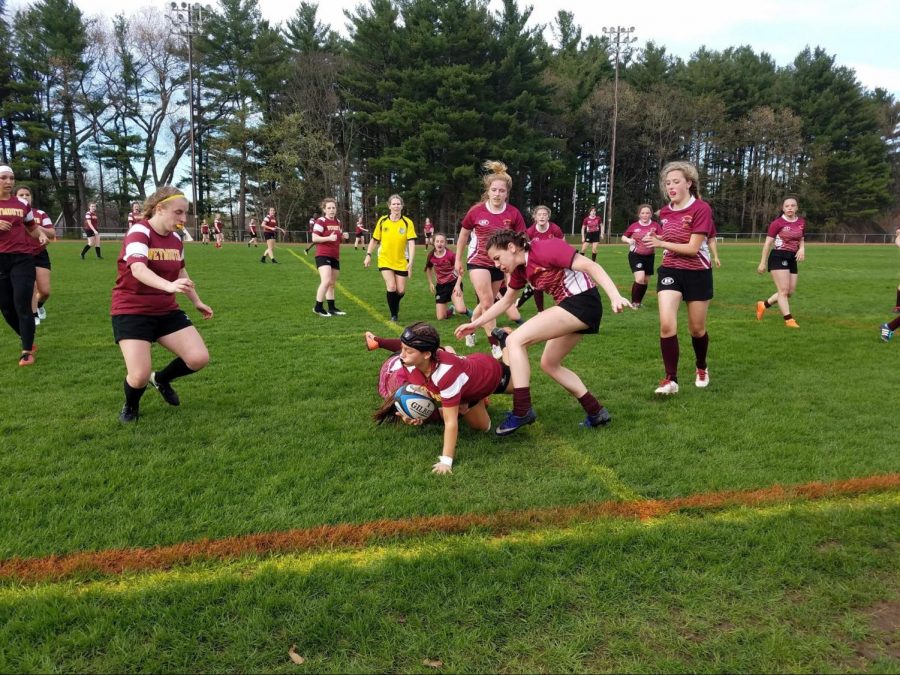 With sensational teamwork and dedication, the girls’ rugby team triumphed over Weymouth 21-5 on Thursday, April 25.

After incredible passes and tackles by many of the players, the team entered the second half with a 7-0 lead, and freshman Colleen Mulligan increased the gap with two amazing conversion kicks, contributing greatly to the team’s 21-5 win.

“I think the girls really played together; they definitely supported each other better than our first game,” coach Emily Philbin said. “We have a lot of new players; they got experience through practice to be prepared for the game.”

“It was a hard game, but everyone gave their all and we all played really hard to win this,” senior captain Lydia Grist said.

During the game, three players were assisted on the field by the athletic trainer, with two Weymouth players being led off the field. Junior Jordan Manousos, one of the injured players, suffered a gnarly fall as she brought herself and her opponent to the ground. Manousos didn’t let the tumble faze her; after taking a few breaths she was back in the game.

“[Injuries] often happen; it’s an exhausting game and sometimes you get hit and it hurts really bad and you need a moment and you’re ready to go,” Philbin said. “[Manousos is] really tough too, so I wasn’t surprised.”

The players, who often must tackle their opponents in order to possess the ball, are no strangers to minor injuries. Players see their scrapes and bruises as symbols of their dedication, showing off the  numerous marks on their bodies to their teammates.

Although rugby may seem like it’s all tackles and kicks, there is more than meets the eye. These team practices hard to improve technique, communication and strength as a whole. New players every year have to learn the rules of the game as well as where they fit into the team positions.

“Our goals for the team and the girls is to become confident in their playing abilities and the game,” senior captain Charlotte DiGiovanni said.

“I’m really proud of the team as a whole because all the stuff we practiced just came all together,” Mulligan said. “Everyone just had so much spirit, and everyone was really hyping each other up. It felt really good.”