THE ALGONQUIN HARBINGER • May 6, 2019 • https://arhsharbinger.com/18179/sports/boys-lacrosse-wins-in-a-blowout-against-leominster/

Boys’ lacrosse wins in a blowout against Leominster 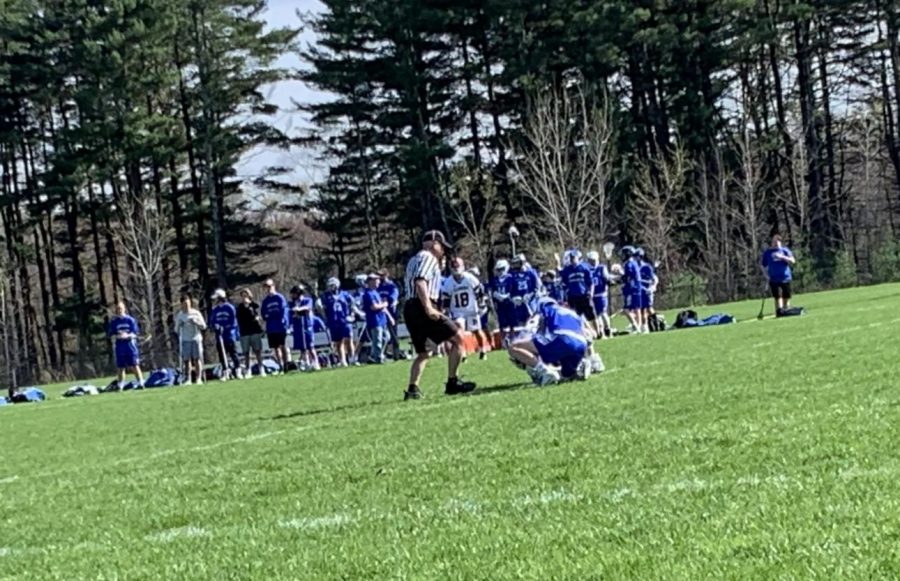 Freshman Graham Ray starts the game with the face off against Leominster.

Boys’ lacrosse proved their great skill as frequent starters, as well as underclassmen, came together to secure a 19-2 win against Leominster Thursday, April 25.

Many of the team’s top players, including seniors Sean Cullen and Domenic Russo, were unable to play due to injuries. Senior captain Callen Willwerth was admittedly nervous going into the game without them. However, he said that only inspired the team to play harder.

“We were missing a lot of our key guys, so I knew that we needed to come out aggressive and be firing on all cylinders,” Willwerth said.

“Once we got a big lead, we wanted to get everyone involved, so letting kids who don’t normally get as much playing time was very important to keep a good team spirit,” Willerth said.

Sophomore Henry Antino was one of these lucky players and scored his varsity first goal.

“This game really helped the team to bond after the coaches were able to get everyone in the game,” Antino said.  “It was so nice to get my first varsity goal, but I still have to prove myself to get consistent [playing] time.”

Big wins like this ultimately bring the team one step closer to their playoff goal, and Larsen is hopeful forthe team’s future.

“We’re trying to take it one game at a time right now and get past the quarterfinals, then hopefully we’ll make it to CMASS [finals] and maybe States,” Larsen said.

Head coach Matt Nofsinger is also optimistic about the rest of the season, especially after such a huge win.

“With the added talented younger players that we brought up to varsity, we feel like we can accomplish something really special,” Nofsinger said. “This has been one of the best groups of players I’ve had the privilege to be around. They work hard, have a strong IQ of the game and genuinely like another. They want to play hard for one another.”