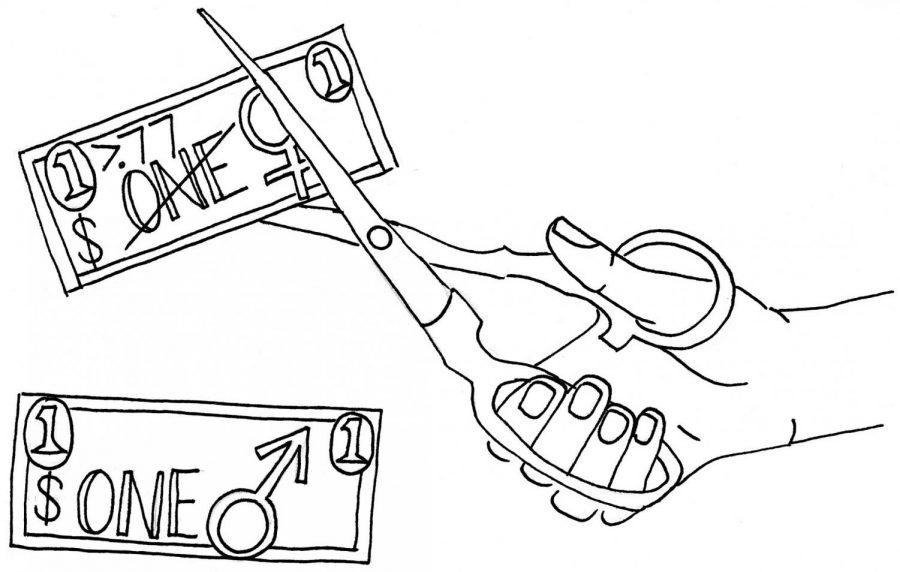 In 1963, John F Kennedy signed the Equal Pay Act into law. In short, this law states that no employer may discriminate and pay workers differently based on their sex. Men and women have to be paid the same amount for doing the same job.

Although our country has made significant progress regarding the equality between men and women in the workforce, there still remains room for improvement. According to the Institute for Women’s Policy Research (IWPR), women’s earnings in 2018 were 81 percent of men’s. How can we say that we’re proud to be one of the most modern countries when we don’t even pay all genders the same amount for doing the same job?

The wage gap is most prevalent in male-dominated industries. According to a 2017 study conducted by the American Association of University Women, the largest pay gaps involve women who are in financial services and management.

It is no secret that the worlds of business and sales are mainly comprised of men2018’s Fortune 500 list only has 24 female CEOs. And even with new women entrepreneurs, like Mary Teresa Barra, CEO of General Motors, powerful moneymakers are predominantly male. In fact, according to Fortune magazine, the number of female CEOs dropped 25 percent in 2018.

In these intense work environments, women often come under heavy scrutiny.  Is it because a woman entering a male dominated workforce is seen as intimidating? Are men threatened by women being as successful as them? Why exactly is it that some men are afraid of women who are doing the exact same job as them?

While there could be plenty of other reasons why they come under scrutiny (such as pure incompetence or inefficient leadership ethics), a lot of this disrespect comes from just being a different gender. Giving more respect to women in these fields and treating them like worthy coworkers will help ensure the pay gap lessens in these workforces.

A wage gap also exists female-dominated fields such as teaching. According to a 2012 survey by the U.S. Bureau of Labor, 18.3 percent of elementary and middle school teachers are male. Although teachers are paid based on how long they have taught, equality is still not present between men and women and overall women are still paid slightly less than their male colleagues. According to a 2012 IWPR study, women teaching elementary school make 91 cents for every dollar earned by their male counterparts.

Male and female teachers do the same amount of work, so why are women still paid less?

The wage gap isn’t limited to solely the disparity between women and men. Within the female demographic, ethnicity and race can play a role as well. According to the National Partnership for Women & Facilities, as of April 2019, Latina women were typically paid 53 cents compared to the dollar of a white, non-Hispanic male doing having a full time, year-round job. If both of these workers were paid the same, women would be able to afford at least three additional years of child care. Think about that.

This gap exists for every other race. According to the National Women’s Law Center, black women make 63 cents for every dollar paid to a white, non-Hispanic male. With this nation’s history of racism and unequal treatment, equal payment would be a clear step in the right direction. .

How to Move Forward

This year, Equal Pay Day in the United States was on April 2. To recognize this important day, the She-Hawks organized their annual Wage Gap Bake Sale. In previous years, they have charged females 70 cents and a male 1 dollar for the same baked good to simulate the gap, as well as charging minorities different prices that represent their relative salary in the workforce. However, this year, males and females paid the same price for their yummy baked good: nothing.

“The administration thought that our previous way of running the bake sale was discriminatory, and they couldn’t allow us to do it that way and endorse it,” co-president of the She-Hawks Sydney Rosenthal said.

Small steps like bringing attention to the issue and changing attitudes in the workplace will eventually lead to a closing and ultimate elimination of the gap. This bake sale has historically been one way of exposing the issue to students who felt immediate impact and gained awareness, so it is unfortunate the impact of the symbolic prices has been lost. However, Rosenthal remains optimistic.

“Ideally, the people we go to school with will someday be pioneers in industries and having jobs and possibly being in charge of determining what someone’s salary is,” Rosenthal said. “The important thing is to continue educating people with this bake sale and making strides towards changing this issue.”

In all fields of work, especially ones that are male dominated, we need to encourage young girls to pursue their dreams and assert their value alongside male colleagues. We need to encourage all people to speak up when they are treated unfairly based on their gender or race.  I want to be paid the same as my male counterparts for doing the same exact job. That shouldn’t be too much to ask for.