THE ALGONQUIN HARBINGER • May 1, 2019 • https://arhsharbinger.com/17929/showcase/cheer-places-first-at-nationals-makes-school-history/ 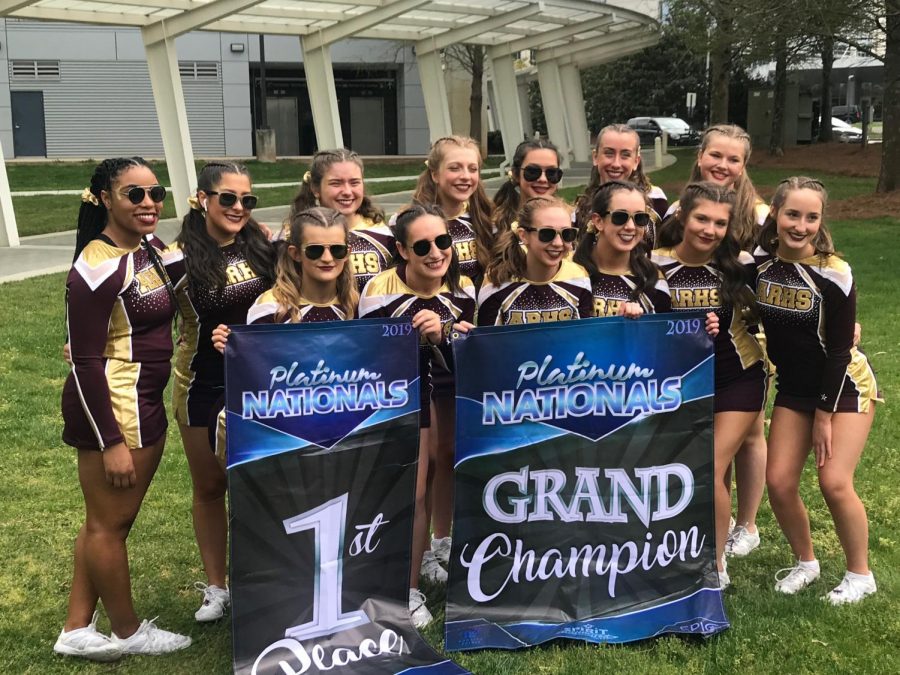 The Cheer team poses with their Grand Champions and first place banners after the awards ceremony.

For the first time in school history, the cheer team competed at Nationals in Atlanta, Georgia where they won first place in Advanced All Girl Varsity Division and won Grand Champs in the School Division, ending their season.

One of the reasons for their great success was based on how close the team was, but  originally they did not think they would do as well in the competition.

“We definitely were a tight knit group this year,” senior captain Lily Schaefer said. “We had a lot of underclassmen, but they were all really talented which definitely helped. We thought that this was going to be a really big rebuilding year since we had so many freshmen.”

The team won Grand Champs in the School division which included three teams. There were 60 teams in the entire competition.

The night before their competition the girls spent time in their coaches’ room bonding and connecting with each other.

“We each had a person and we wrote cards to them to give to them in the morning of the competition, which was a big confidence booster,” sophomore captain Lucy Mcglynn said. “We also did an activity where we threw string across the room to each other and gave the girl a compliment. After we each cut of a piece of the string and tied it around our ankle, so when we were competing we could look down at it and know we had each others’ backs.”

The girls performed once and right before they competed they had a few minutes to warm up and practice parts of their routine.

“We were feeling really good about [the routine] and we were hitting all of our stunts,” Mcglynn said.

The team practices on seven mats, but at this competition there were nine. Some of the girls were nervous about the spacing.

Before competing the girls ran out of time to talk and pump each other up, like they had anticipated doing.

“I remember looking at the smiles on everyone’s faces and knowing that we were going to be great,” Mcglynn said. “Of course we had a little bit of nerves, but I think overall it pushed us even more to do the best we could.”

According to Mcglynn, the fright of being in front of an audience did not get in the team’s way. There were a lot of people there, yet there were also bright lights on the stage blocking the team’s ability to see the audience.

They have been perfecting this routine since August, making alterations along the way, and at Nationals the team scored a 93, their highest score of the season. According to their Norsworthy, their routine had many fast pace skills and stunts.

“Some highlights of the routine include increasing pyramid, partner stunt and tumbling difficulty and adding more excitement to the routine,” Northworthy said. “The girls really enjoyed performing more elite skills at an even faster pace.”

They were happy with how they performed their routine, but the reality that it would be their last time doing it all together sunk in fast.

“We all knew it was going to be our last time competing with the seniors and after the routine everyone was trying to hold onto those last few moments with the team,” Mcglynn said.

Waiting for awards did not stress out the team. They were happy and content by the fact they had made it to Nationals.

“I think everyone was excited for awards to see how well we did,” Mcglynn said.

According to the captains next year the team hopes to work harder in practices. This year they also learned the key to a great team is team bonding, which they hope to do more of in following seasons.

This was a historical year for Algonquin Cheer, and the team hopes that they will continue to be successful in years to come.

“We hope and believe that the success from this historic cheer season is just the beginning,” said Norsworthy. “ARHS Cheer has quickly become a force to be reckoned with on a League, State and National Level. We are very proud of the girls and all their hard work, commitment and teamwork over the past season.”

Throughout their long journey, the girls grew very close to one another.

“I’m going to miss the girls on my team the most,” senior captain Chloe Meyer said. “They are all so hardworking and they made this season such a great experience.”

The girls were very happy with how the season went. Many of the seniors are going to miss it, but are hopeful for the upcoming seasons.

“I am so happy that I left a mark at Algonquin,” senior captain Hayley LeBeau said. “We made cheer history, and I believe this year and season will never be forgotten. I have such high hopes for the upcoming years for the lower classmen.”