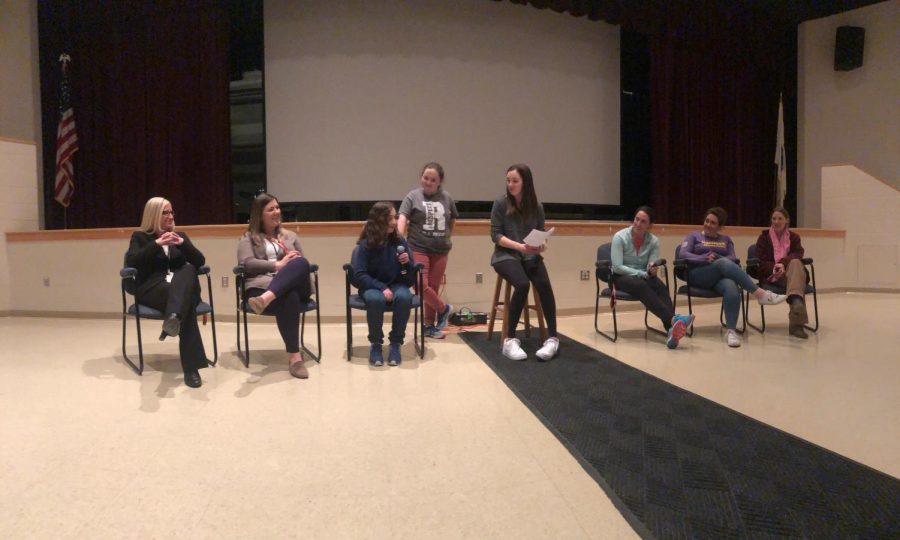 Towards the end of the inclusion assembly on March 14, a panel of students and teachers shared why inclusion was important to them.

Best Buddies hosted an assembly to promote inclusion in the auditorium on Friday, March 13.

Best Buddies adviser and science teacher Kevin Hausmann and senior Lily Schaefer worked together to direct the assembly. Through education of history, empowering videos and testimonials, the assembly encouraged students to branch out and embrace people’s differences.

“Instead of bringing each other down, pull each other up,” Best Buddies Officer and sophomore Luke Osetek said. “If someone appears lonely or upset, approach the situation; instead of walking past someone, ask what’s wrong and show compassion. I think change through younger generations holding these events and people with a platform and finances helping to spread awareness are all beneficial in helping the inclusion effort.”

The beginning of the assembly featured a video on former President John F. Kennedy’s efforts to combat the lack of compassion surrounding people with intellectual disabilities.

Next was a reading of an essay by Best Buddies officer and sophomore Nick Alcock, which provided insight on his experience working with best buddies and ideas on how to make sure everyone feels included.

“Short term, we had great feedback [on the presentation], and long term we hope these efforts are applied and carried through students’ lives,”  Hausmann said.

Alcock believes inclusion is important for people with or without intellectual disabilities.

“Don’t be afraid to put yourself out there,” Alcock said “Meet new people every day and continue talking to those people as the day moves on. Stay is touch with the friends you know, even if it’s just a simple high-five in the hallway.”

Near the end of the assembly, a panel of teachers and students shared their own personal struggles with inclusion. The panel, which included applied arts and technology teacher Nicole Ruffo, history teacher Brittany Burns, health and fitness teacher Kristen Morcone, foreign language teacher Sarah Lawlor and junior Julianna Eigen, explained how they felt people were divided through labels.

“I normally get really nervous to perform, [but] I just decided to try and I don’t let anything stop me,” Castilla-Villamiln said.

The assembly ended with a heartwarming video of a boy named Andrew from Great Britain with intellectual disabilities trying out for a dance competition show called “The Greatest Dancer,” where he wowed the audience with his talents and brought the judges to tears.

“Being a part of Best Buddies in general completely opens your eyes to the great people in a community that maybe otherwise you wouldn’t have been lucky enough to meet,” Alcock said. “I’m just happy to affect these people’s lives in a positive way and establish great friendships with all of them.”