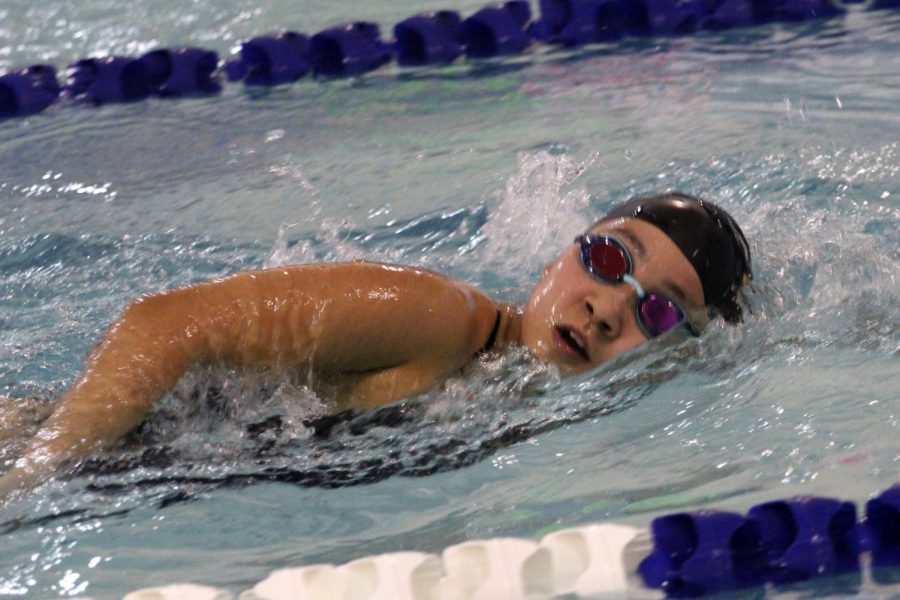 Sophomore Hikari Torikai swims freestyle on her meet on Jan. 18.

The swim and dive teams finished their undefeated season strong at States on Saturday, Feb. 23 and Sunday, Feb. 24, led by third place junior Lizzie Meschisen in diving and third place senior Ray Cerro in the breaststroke.

According to senior captains Kate Beland, Tara McGillicuddy, Matt Beland, Ray Cerro and Ryan Murphy, there are many factors that make it difficult to compete with other teams in States, such as not having a swimming pool at Algonquin and having limited practice time.

The team focused on seeing their individual swimmers succeed.

“The focus in States is usually on individual events, since Algonquin can’t even compete with some of the larger schools, like Saint John’s Prep…places 1-16 in every event score points, so if for instance I get first, but Saint John’s Prep gets 5th, 6th, 7th and 8th, they’ll end up with more points than us,” Cerro said.

According to the captains, although their placements at States was not everything they had hoped for, they were extremely proud of the individual swimmers that placed.

“The highlight was our diver, [junior] Lizzie Meschisen placing third overall in the state,” McGillicuddy said. “It was exciting to watch her dive and to see the high scores she was getting after each dive.”

Meschisen performed forward, backward, inward, reverse, and twisting dives. Five were optional, harder dives, and six were voluntary, easier dives. She averaged a score of seven on each dive for a total score of 463.

“States was very successful,” Meschisen said. “Getting third in the state [for diving] means a lot to me because the girls who got first and second are seniors, and they’ve been diving all their lives. The fact that I was able to come close to them means a lot to me.”

Meschisen has been diving for about three years and continues to improve each year.

“I got eleventh [at States] freshman year and I got sixth sophomore year, so I am able to continuously improve,” Meschisen said. “I put a lot of time and effort into making the season great, and I’m happy it all came together at States.”

Cerro placed third in the breaststroke and sixth in the 50 free, breaking both of those previous school records holding times of 58.13 and 21.99.

A relay team consisting of Beland, Murphy, Cerro, and sophomores Will Saulnier and Brandon Saulnier also performed well at States.

“We met some of our personal goals, but fell short of our goal to break the Algonquin 400 free relay by .02 seconds,” Matt Beland said.

Overall, according McGillicuddy, the meet was still a success for the team because of the improvement demonstrated.

“Many of our best times and high placements for both our swimmers and divers helped us reach our goal of wanting to do much better at States than we did at Sectionals,” McGillicuddy said.