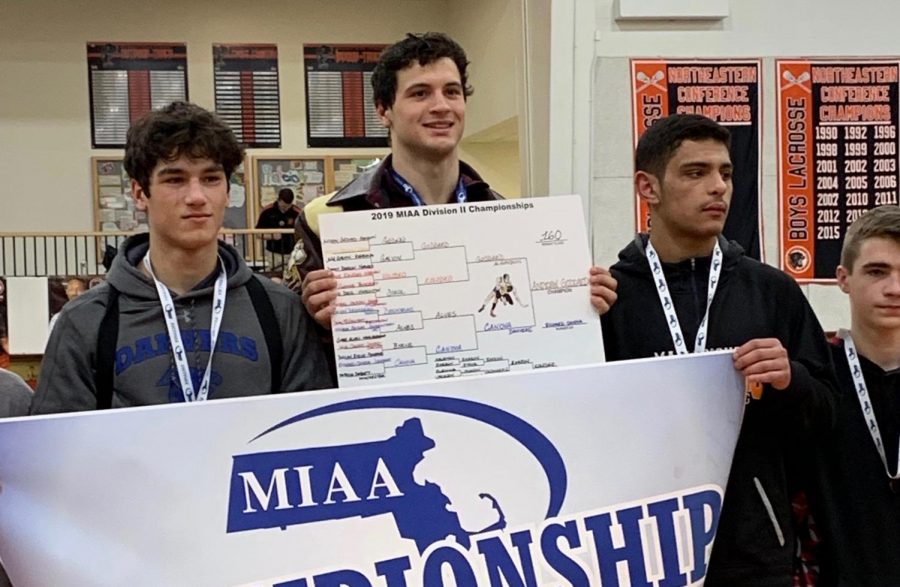 The homeschooled Northborough resident’s quick 2-0 win in the finals against Richard Conova of Danvers High School makes him the first Tomahawk to win a Divisional State Title in wrestling since Baird Lashley in 1988.

“I pinned him during the first period,” Goddard said. “I had a standard single leg and took him down. Once he was down he stayed down…it was quick, a little over a minute.”

“Andrew was the first Division II State Champion in thirty years,” coach Brian Kramer said. “So it has been a long time, and in my eight years here we have had five finalists who have lost in the final…it was really cool to go see Andrew take home that trophy.”

Goddard’s teammates were also impressed by his win, but they were not surprised by his abilities in the match.

“Seeing him [Goddard] win states was unbelievable,” junior John Fontecchio said. “I knew he was going to do it because of how good he is and how long he has been wrestling.”

After winning states, Goddard went on to win second place at the 2019 Division II All-States, a competition with wrestlers from all of Massachusetts, on Feb. 22 at St. John’s Prep in Danvers.

“Especially in this past year, I had the goal of being an All-States Champ, never happened but it was definitely my biggest goal,” Goddard said.

Although Goddard did not reach his goal, he put an immense effort into the match he lost at All-States.

“[My opponent] took me down, and rode me out through the first period,” Goddard said. “Second period it was 2-0. I started on top and he escaped making it 3-0; I shot in on him while I was in on his legs; he hit me in a judo throw and I was pinned.”

Goddard also placed sixth at the 2019 New England Championships on Friday, Mar. 1 and Saturday, Mar. 2. He credits his success to his strong support system.

When planning his future, Goddard looks to college as well as his faith.

“I am attending the Masters University in California; I want to get a degree in business there,” Goddard said. “My biggest goal obviously would be to pursue God in everything that I do. That’s my goal throughout everything.”