Lee proves to be double threat as math, badminton prodigy 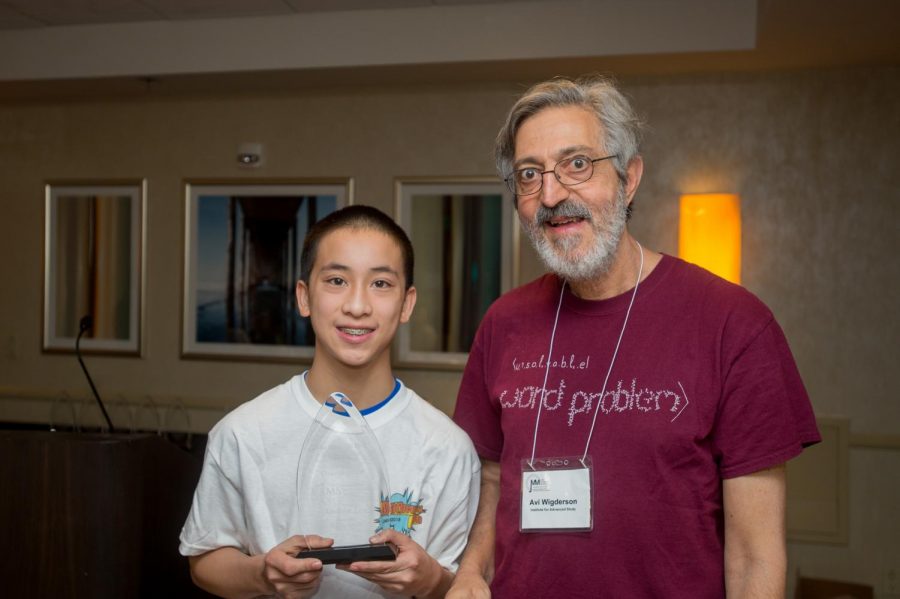 Andrew Lee holds his award proudly with Avi Wigderson from the Institute for Advanced Study at the 2018 Who Wants to be a Mathematician awards breakfast.

A mathematical genius at a national level, freshman Andrew Lee serves as a double threat by not only dominating in the academic realm, but also on the badminton court where he’s ranked third in the nation.

In seventh grade, Lee completed all math courses in the high school curriculum up to AP Calculus BC, and he currently takes an online course on multivariable calculus.

With his family’s help, Lee developed a passion for math. His father, Wan Yik Lee, has a Bachelor’s degree in math, creating a father-son connection.

“Since [Andrew] was very young, he always had an aptitude for math,” Wan Yik Lee said. “He seems to develop a talent in math much faster than others. Partly because of the nature of the activity itself; math is more individualistic…As long as you have a table and time, you can learn it easily.”

Lee began competing in math competitions in fifth grade. In 2018, he was the youngest contestant to qualify for the “Who Wants To Be a Mathematician” national competition, and he finished in third place, winning $1,000 for himself and $1,000 for Melican Middle School.

One of Lee’s main goals is to qualify for the International Mathematical Olympiad (IMO), an annual elite olympiad for students under twenty years old. To do this, he will participate in an extensive training and competition program.

“[IMO takes] the top six [mathematicians] in the US, and it takes a lot of work,” Lee said. “I think I have a good chance of making it.”

Lee is also an accomplished badminton player, something else he shares with his father. For the majority of last year, Lee was nationally ranked third in boys’ doubles with different partners.

“I like competing and winning,” Lee said. “I also just like getting better at it and training and working hard.”

While his father encourages him and helps out on the sideline, Lee trains at Boston Badminton Club in Westborough for eight hours a week

“At fourteen years old, he has strength, he has stamina, he has agility,” Wan Yik Lee said. “Those are the qualities that allow him to be a top player in badminton. I still help him in a way by coaching him in terms of game strategy.”

Because Lee participates in so many activities, his biggest challenges are time management and prioritization. He has dropped piano, violin, figure skating and taekwondo due to a lack of time, allowing him to focus on math and badminton.

“Whatever I end up doing in the future, I will try to keep playing badminton.” Lee said. “I also want to continue improving my math.”