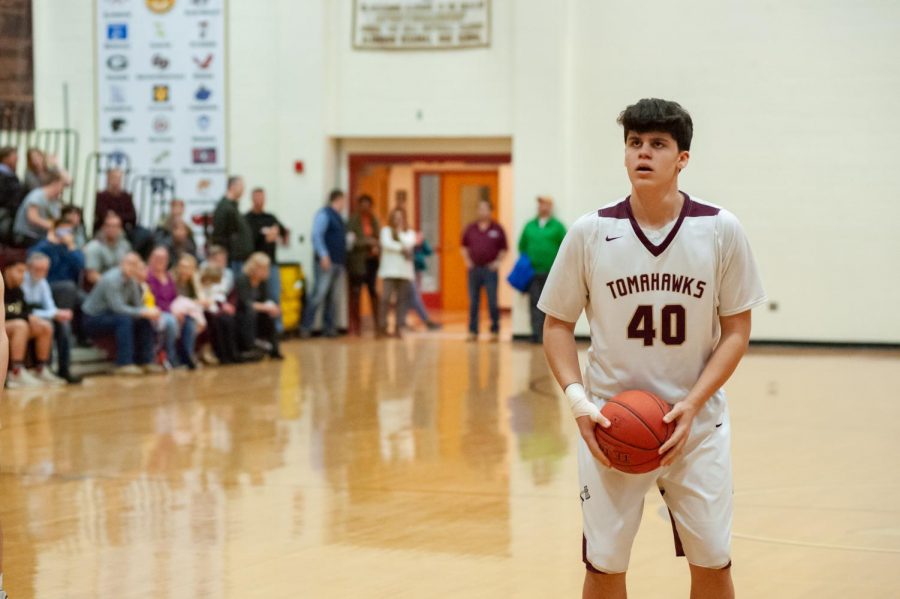 Boys’ basketball got revenge on the Shrewsbury Colonials with a 80-52 win at home on February 8, after losing a previous game in Shrewsbury 61-59 on January 15.

The T-Hawks were winning  39-32 at halftime, and they increased their early lead with a dominant second half. Senior captain Brian Duffy led the team in scoring with 29 points. He started off strong and stayed hot for the entire game.

The T-Hawks played well all-around with a 13-2 run in the first three minutes.  Shrewsbury narrowed the lead towards the end of the first quarter, and then again in the late second quarter with a 7-0 run, but the Tomahawks finished the first half up by seven and dominated in the second half, outscoring Shrewsbury 41-20, led by Karaban and Duffy.

Karaban topped off his big game with a huge dunk with about one minute left.

“They came out hard; our goal is to get a big lead at halftime, and put it away early,” head coach Brian Doherty said.

The whole team did their part.  They had four double-digit scorers, and freshman Todd Brogna, a new addition to the team, scored his first varsity points.

With the win, Algonquin heads into the final week of the regular season on a four game winning streak and a 14-4 record.  After beating some of the top teams in the state this season, the team is now ranked number six in the state according to maxpreps.com.

“Definitely confident about this team,” Duffy said.  “Whatever we do, I think we have the most talent around.”

The T-Hawks will travel to Fitchburg on Tuesday, February 12 for their final intra-conference game of the regular season.