Save the planet with your plate

A vegetarian diet leads to a healthier environment 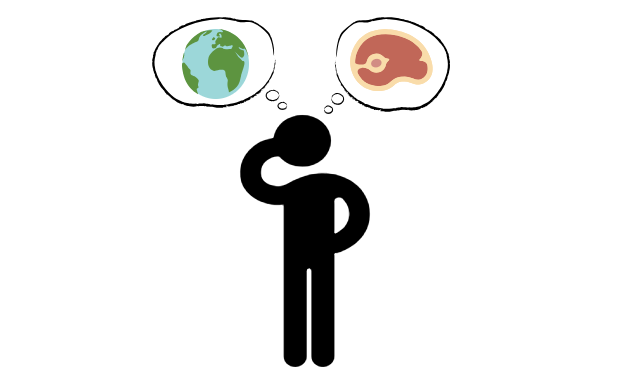 Assistant Opinion Editor Sharada Vishwanath stresses the importance of considering the environmental impacts of your diet.

Not everyone can sympathize with a chicken.

Even I, raised a vegetarian, admit that animal rights are not my top priority when it comes to my diet. In fact, the biggest reason why I’m a vegetarian is because I always have been.

So being hesitant to change from eating meat your entire life to suddenly stopping completely is understandable. Nevertheless, people should still at least be mindful of the impact their dietary habits have on themselves and their world.

You are probably aware of the jaring medial consequences that can come with a meat-heavy diet, and of course, there is the whole animals rights aspect. However, there is one factor that often isn’t discussed: the environment.

The possible detriment of our planet is a concept that we are growing increasingly aware of, and its irreversible damage may be approaching at an alarming rate. Becoming vegetarian is a way that you can clean up your environmental footprint: the mark that you leave on the Earth throughout your life.

But how can turning down meat lead to a healthier planet? The answer lies in cow farts.

When cows pass gas, they release methane, and that methane forms a layer around the earth which traps the sun’s radiative heat in the atmosphere. According to a Gizmodo article written in 2017, one cow will emit up to 50 gallons of methane a day. This methane is as destructive as carbon dioxide, making meat production the number one source of greenhouse gas emissions.

When I first processed this, I initially thought,  ‘Cows are going to fart either way. How are meat eaters directly affecting the amount of gas released?’

It turns out that farmers will fatten up cows excessively to get the most meat from them. And the larger the cow, the more methane is emitted. According to a Vox article written in 2016, on average, a vegetarians’ ecological footprint is two times cleaner than that of a meat eaters.

The amount of methane being released is not the only problem associated with meat production. Meat production involves an excess of natural resources to be wasted, whether it be through land use, pollution, water waste, or climate change.

One of the biggest concerns is the amount of water usage required to raise a cow. One PETA article states that 1 pound of beef takes 2400 gallons of water to produce; it takes 683 for a gallon of milk. A simple Google search could reveal all sorts of other problems with meat production. According to PETA, factory farming runoff creating toxic rivers; liquid manure causing neurochemical issues in humans; the list is endless and certainly concerning.

It’s easier said than done to change the way that you have been eating your entire life. So instead of making that change in one day, it’s okay to take smaller steps.

Maybe you take on meatless Mondays, or exclude a certain type of meat from your diet to start. You could be a a reducetarian, eating mostly a vegetarian diet, for soley environmental reasons. A lacto-tarian cuts out eggs along with meat, and a pescatarian cuts all meat with the exception of fish. If you aren’t prepared to make steps that involve cutting out a part of usual diet, consider buying local food from a place where you know how your food is being produced.

At the end of the day, it’s your food on your plate, so you should have full authority over it. Just know what other choices are out there, and consider what you can be doing to clean up your environmental footprint, because it just might give you the sense of individual satisfaction you never knew you needed.