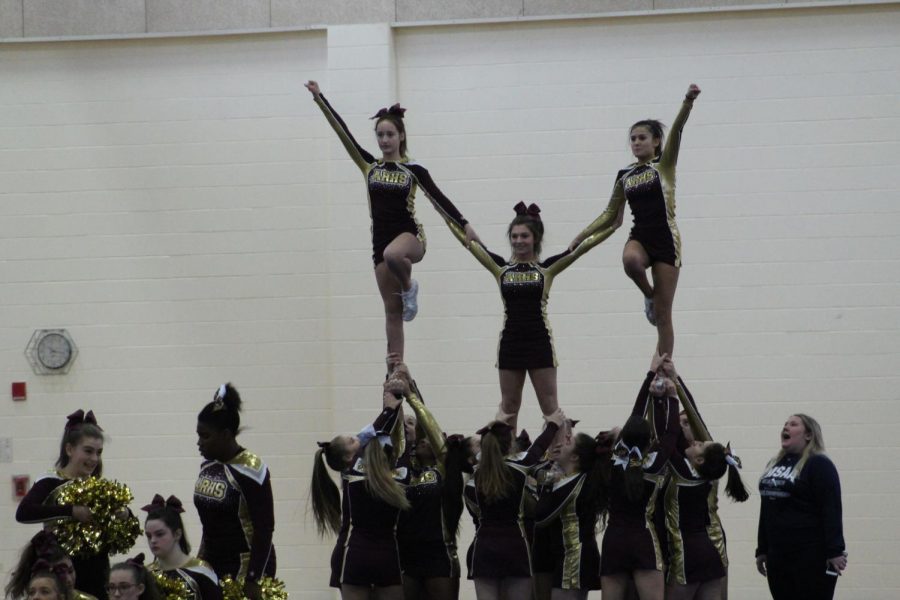 The cheer team showcases their routine at the pep rally on November 21.

The fall Performance cheerleading team placed eleventh at the State Championships on Sunday, November 18 getting a bid to Nationals for the first time in Algonquin history.

After placing fifth at Regionals and getting a bid for States, the team was not expecting much from this competition.

“We knew that our chances of making it to Nationals were pretty slim, and overall we just wanted to have our best possible performance, regardless of our placement and score,” junior Nicole Howard said.

“We expected really tough competition and as usual there was, but we pulled through as a team,” senior captain Hayley Lebeau said.

The team put out a clean routine to make up for their sub-par routine at Regionals.

“At Regionals we didn’t work together as a team,” Lebeau said. “Today we became one and really worked together as a whole. I believe that was the best performance we have ever done. We hit every stunt and landed all of our tumbling. What brought us to our success was how we sold our routine, with facials and sass.”

“Today’s routine was easily the best we’ve had all season,” Howard said. “We brought more energy to the mat than we ever have in the past, which is what made all the difference.”

The success this season has largely to do with the growth in the number of members on the team.

“Our last time at States we had a team of 11 girls, and they were all fantastic, but we’re able to do a lot more now that our program has grown,” Howard said.

The 18 member team looks forward to Nationals in Atlanta, Georgia on April 6.

“My hopes are that we can put out another mistake-free routine that we are really proud of to end the season,” Hostage said.

“As far as Nationals is concerned, I just hope that we end up with a routine that we’re proud of,” Howard said. “I’m really excited to watch some teams that we’ve never seen before. At this point, we’ve made it farther than ever, so I really just want us to do our best.”

The Game Day cheerleading team placed tenth in their State competition on November 11.